Ground-  This is ground

Ground-  Roger, we have no units on the ground in that vicinity

Airborne2-  Copy, we will put down as close as we can and go in on foot

Airborne2-  We are putting down and going in to investigate

Ground-  Roger that, will be awaiting your next 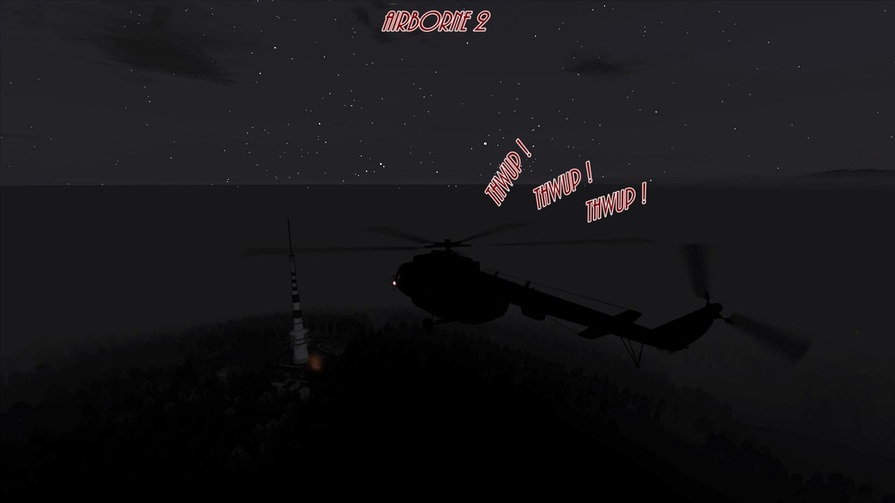 The military chopper put down on the road halfway between Zelenogorsk and Pogorevka, a heavily armed man alighting and swiftly heading up the dirt road to the tower, the chopper hovered awaiting his return. Within the minute he had moved to the tower, hardly breaking a sweat,  his m249 machine gun cradled and ready. The flare they had seen from above was now dead and the mountain was shrouded in darkness. 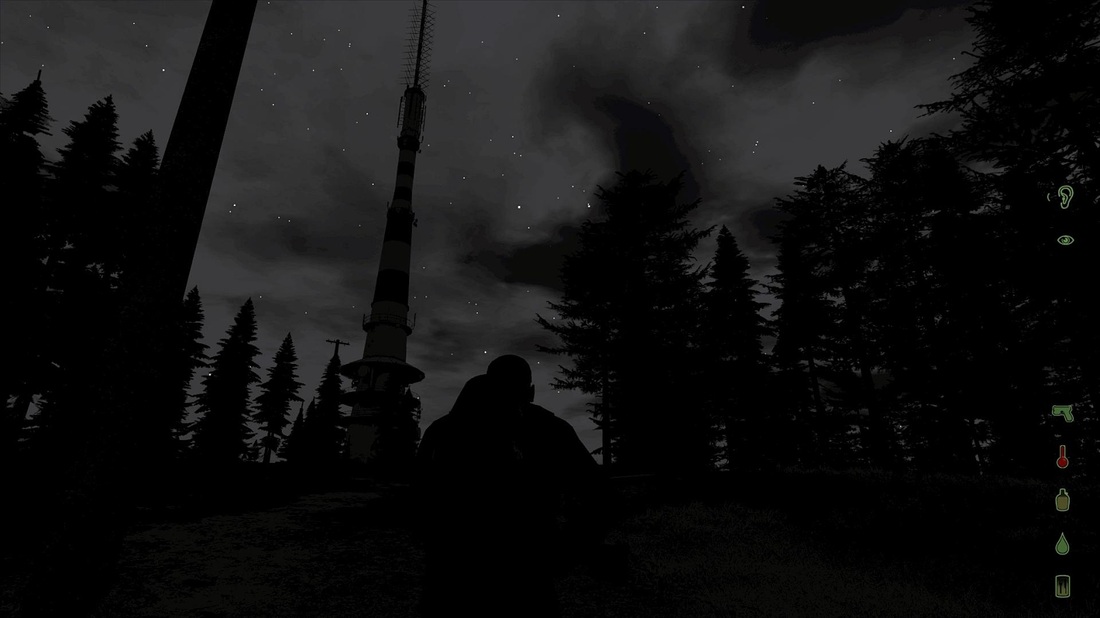 He noticed several groups of dead infected, kicked one, still soft, not long dead. Ten or more littered the ground here, all stitched with bullet holes. The embers of a dying fire thirty odd feet down the slope amongst some logs still threw a tiny circle of light... Dafuq ? He moved in towards the main gate, LMG raised, finger lightly on the trigger. More dead infected just inside and still more as he moved quietly past the tower. Jezuz, someone had had a field day here and handed out a serious can of whupass..blood and chunks of body parts were strewn all over, it was like someone had thrown a handful of grenades into a pile of dead bodies. He became even more alert, fearful whoever it was that had created this massacre could not be far away. His breathing quickened.

He stepped on something smooth and metallic, barely making a sound but to him he knew it was enough if anyone was listening, he froze.. crouched, his breathing quieter than a mouse. He looked down, a military weapon..G36..his eyes adjusting to the rubbish, clutter and bodies strewn all around him. He saw the weapon was slung on someones shoulder, he lowered further, someone who was not infected..still warm. He felt for a pulse..nothing. Poor bastard he thought, he must be the one responsible for this carnage, gone down fighting.. 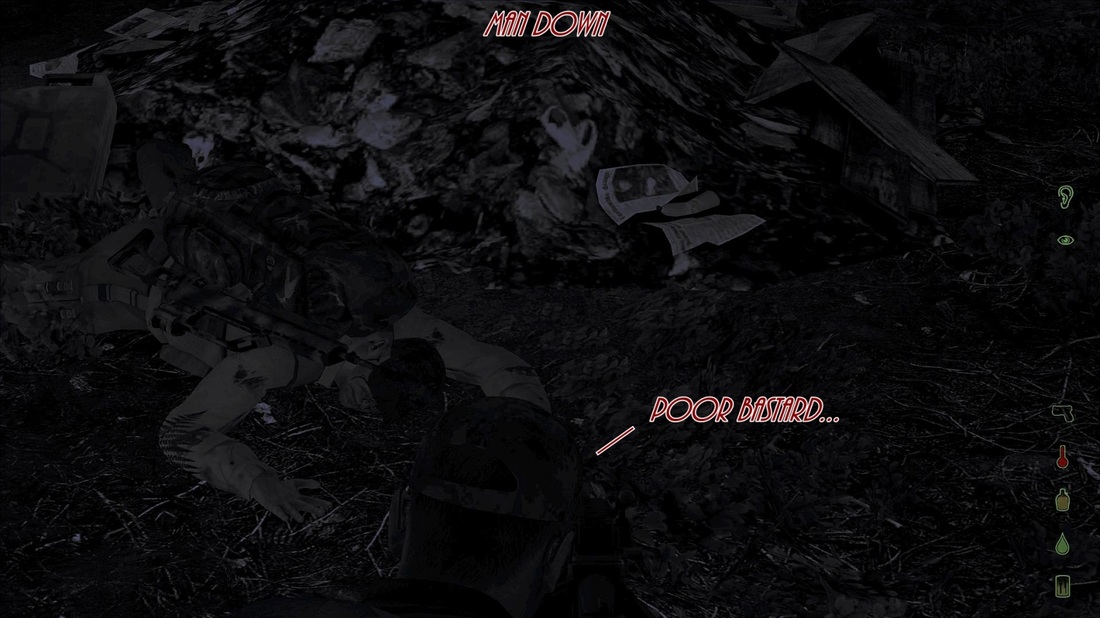 He removed the backpack and looked inside, eyes darting around making sure no infected lurked near, his hand coming in contact with a hard smooth cylindrical object deep inside. He pulled out the can of Mountain Dew, holy fuck..he had not seen a Dew for fucking months ! He placed it back in the pack, dug further and pulled out three flares, removed the caps and lit them one by one and throwing them, lighting a large area around him. He removed the backpack from the fallen body and slung it over his shoulder and then headed into the tower, climbing up the interior ladder to the first platform.

What was the guy doing here ? Hoping for a working radio ?

He stepped outside of the tower onto the platform that ran around it, noticing that the sun was just starting to push towards the horizon, his mouth was unbelievably dry. He placed the the fallen mans backpack down , knelt next to it..reached in and grabbed the can of Mountain Dew, popped the top. The sharp crisp noise seemed to echo across the the forest canopy and in that same moment a breeze picked up and rushed through the trees... as the cold wind hit his face he drew the can to his lips and drank. 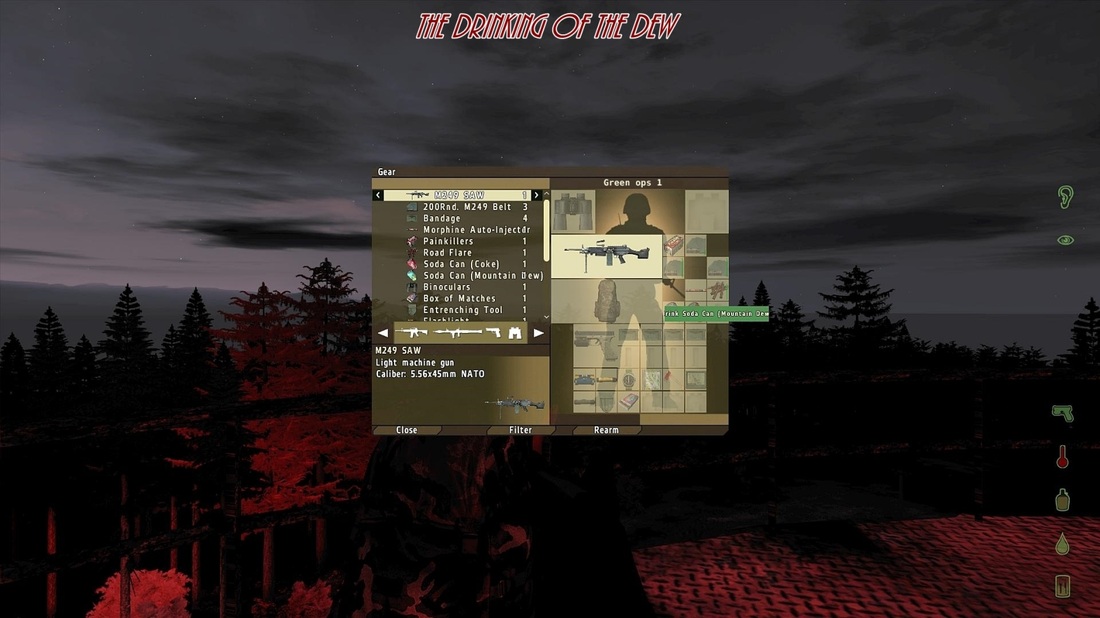 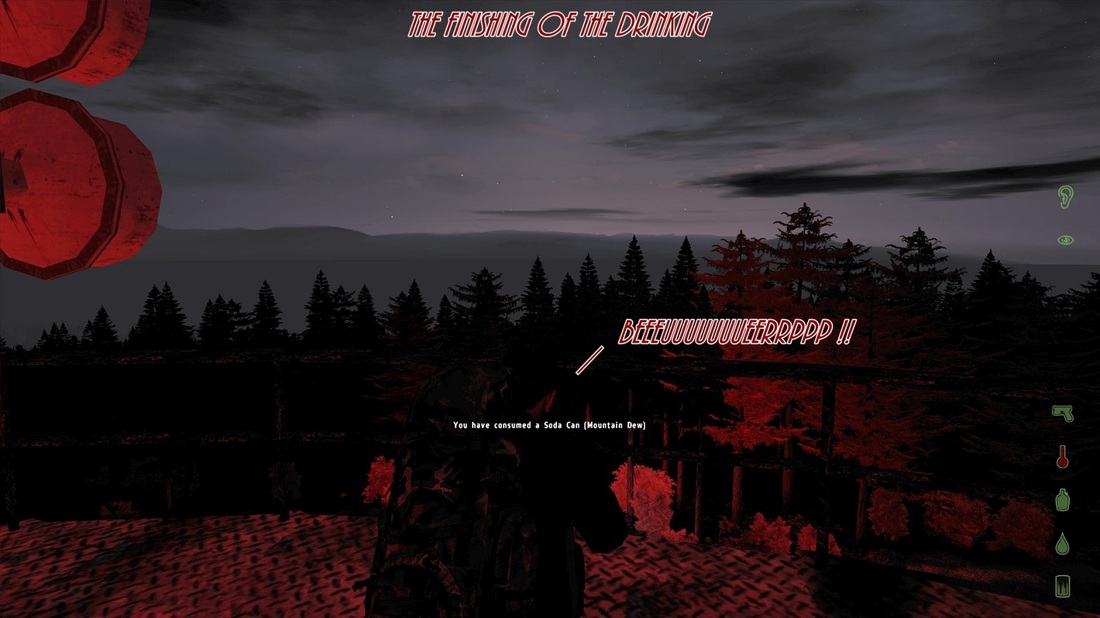 He didn't stop until the can was empty, belched as he pulled it away from his mouth, crushed the empty aluminium can and dropped it onto the grated platform floor. He wiped his lips and a smile creased his face, damn that was good.

Back at the lone mans body he juggled a choice, never one to leave a buddy behind, even though he did not know this man he could tell from experience he had done some hard yards..it left a bad taste to leave him here, a meal for the infected.  It was growing light and his unit remained in cover by day, he had no time to get him to the chopper, he grabbed his entrenching tool and dug a shallow grave in the soft damp earth, covered him as best he could... 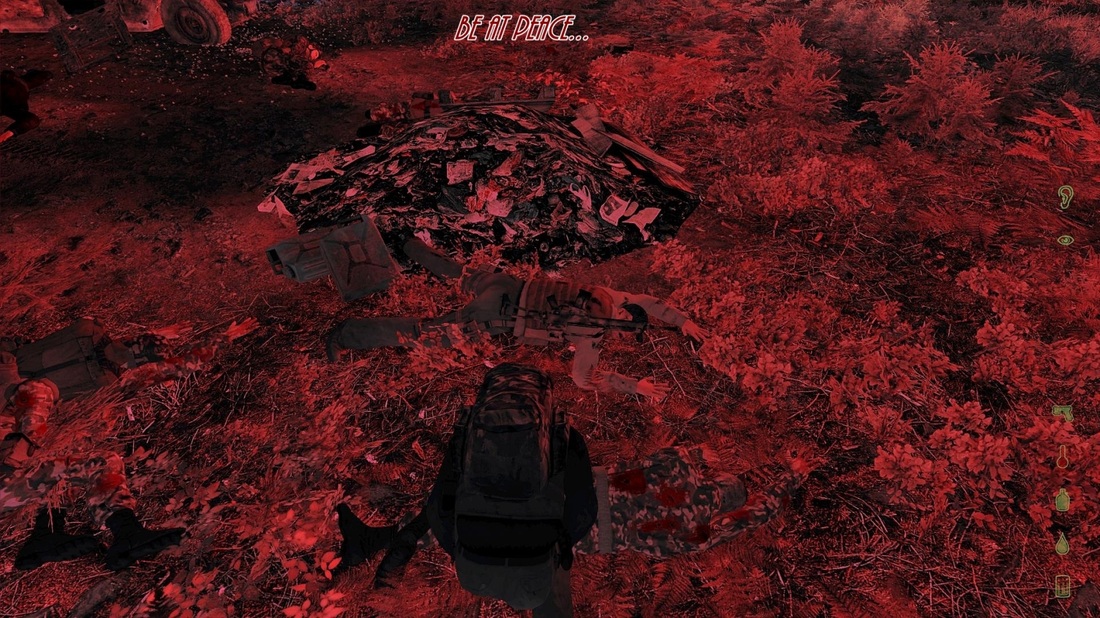 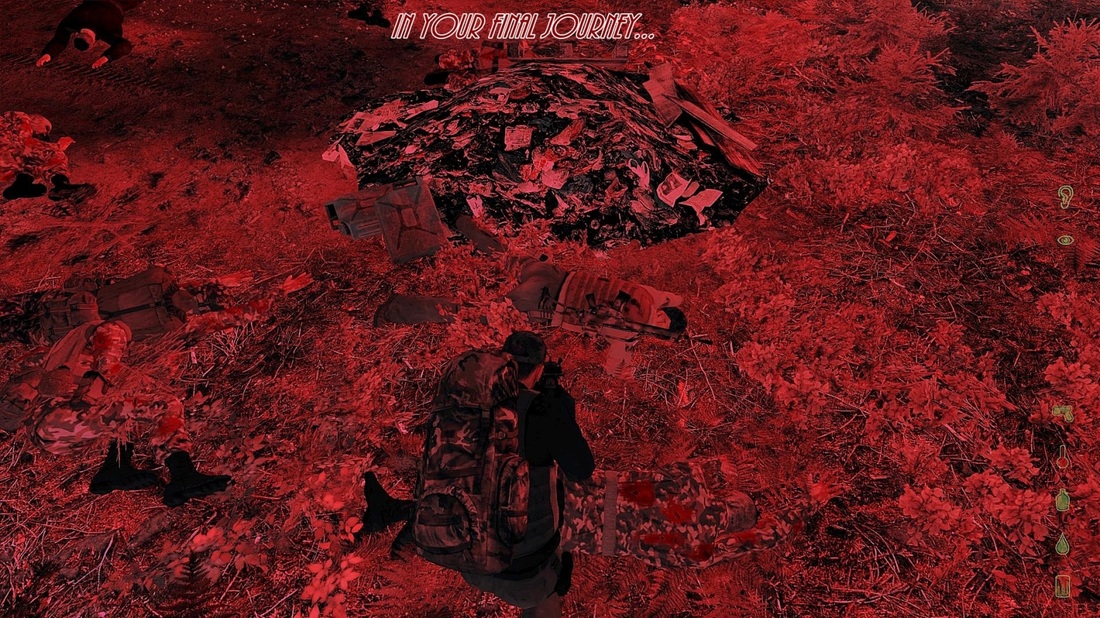 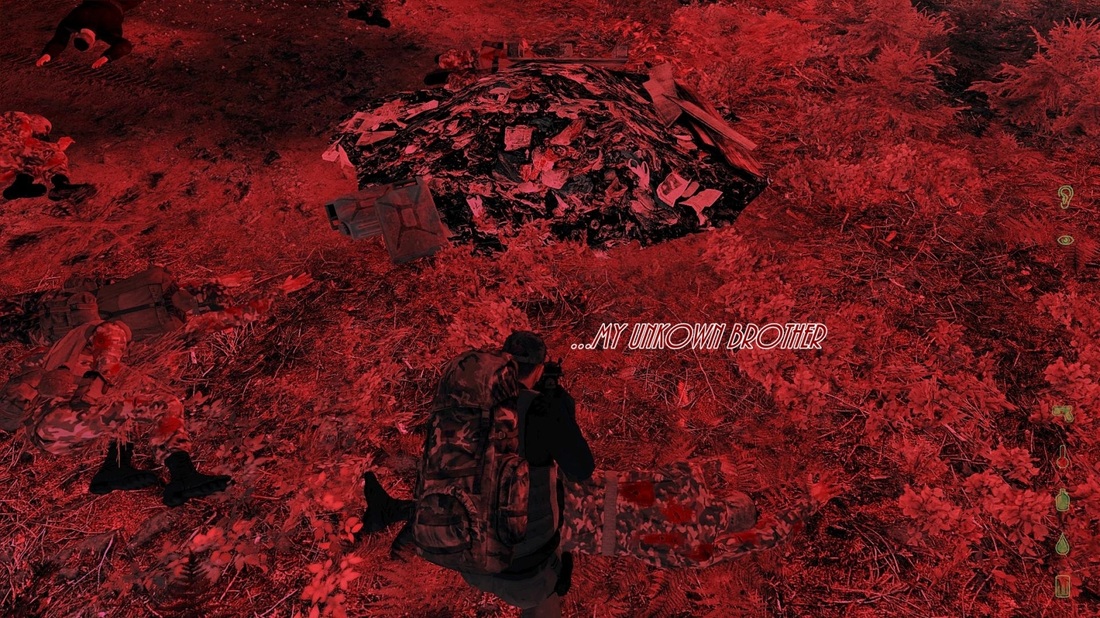 That will have to do, he stayed a few seconds more, looked at the mound in front of him and wondered if a few minutes earlier may have been enough to save him.

As he lifted off in the chopper passing near the tower, heading back to their base of operations in the hills far to the North, he cast a last look downwards..wondering if he would ever know the story of the lone guy.

The heli rolled slightly, pitched downards and gathered speed, he put his hand outside into the slipstream and appreciated the feel of the wind. 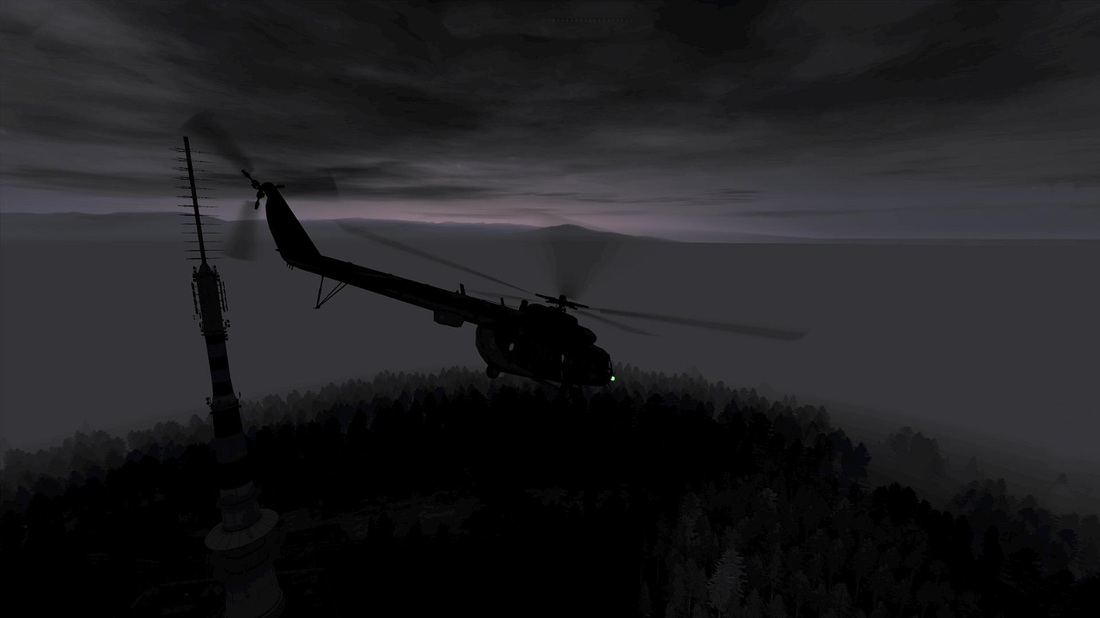