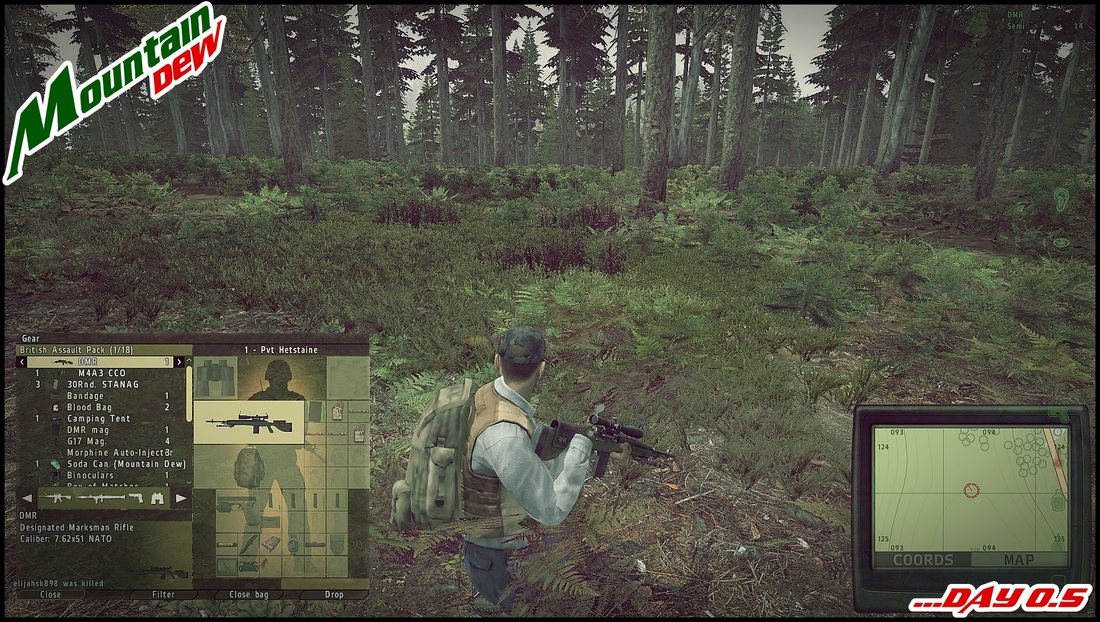 I open my backpack and make sure The Dew is intact and not pierced from my mad rush out of Elektro. The Dew is fine and stares back at me insolently, i close my pack and shake my head in an attempt to dispel the vision of that terrible green and red can. I realise i am coughing like someone who has eaten Kamenkan sand for breakfast and am in dire need of antibiotics. I check my position, just north west of Elektro in the hills, i will make my heading Novy Sobor, first stop Pusta in hope of some food and drink.

On my journey i hope to hunt 'The Big Five' of Chernarus : the long taloned beady eyed Chernogorsk chicken, the proud horned Balota Bull, the short haired goring Guglovo Goat, the thickly tusked Berezino Boar and the elusive but fearsome Rogovo Rabbit. If i can fell all five of these wild woodland beasts i may tip the scales of The Dew curse and push luck back onto my side. Heading off i cannot help but ponder my fate if i come across any of these beasts unprepared.

I break through the trees above Pusta , scoping down across a softly blown sloping grass field, scanning the town below. No movement. I dash out of cover quickly, caring not for the noise i make as i crash loudly out of the underbush,  my gutteral cough is uncontrollable and will alert anyone or anything for miles around

I move across a dirt road that enters Pusta and scamper down into the grass on the other side..then it is on me, the Cherno Chicken springs out of the grass ninjalike, silent and feigning nonchalance as it awarkwardly struts parallel to me, its beady right eye jerking around madly, no doubt sizing me up. I take no chances and bring up my M4A3, then just as i am about to take the shot i hear the cry of the infected , coming at me from three different directions..me and the Cherno Chook in the middle, a triangle of death. If i take my eyes of the kfc escapee it will fly at me, feathers puffed and talons unleashed ! I surprise myself with my focus, everything moves like slow motion, as if i am underwater. With three crisp barks of my gun i have dropped the protectors of the chook, and before the chicken can leap and bring it talons to bear on me , i fell it with a headshot worthy of such a wild and untameable creature.  Shaking, but still focused, i gut the feathery mess like Jaime Oliver on speed...afraid there may be more of his bretheren lurking amidst these wild grass plains. 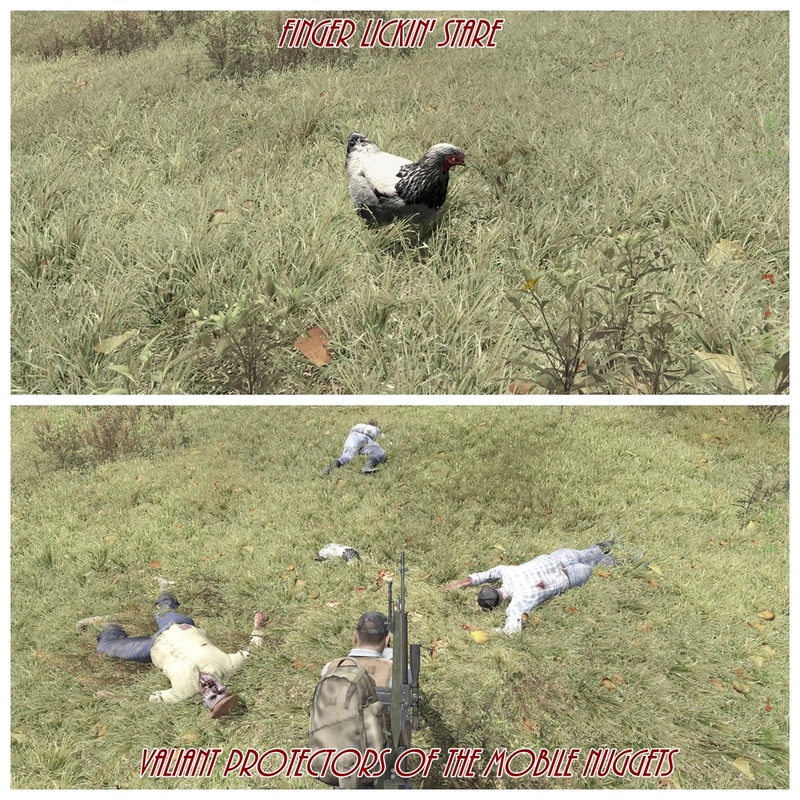 As i stack the juicy chickeness in my backpack i remembered a chicken we had as children, it was named Fingerlickin' because dad said that's how great it was going to taste when it was large enough to eat. We treated it as part of the family as one would a dog, cat or land dolphin, but Fingerlickin' had other ideas and was a leader, not a follower. It got to the point where nobody could enter the yard as Fingerlickin', now fully grown with a great proud dashing red cockerel, an oversize wingspan and flashing great talons, would charge rabidly when anyone entered the yard. Looking sideways with one eye locked on his prey he would leap at them when within range and let forth a hellish rooster battle cry. It got to the point where our yard was Fingers domain and people were forced to walk on the other side of the street, kids would run past screaming and even the largest sewer cats gave us a wide berth. Lonely times.

Needless to say Finger went the way of the winchester when we gave him away to some people who lived on a farm. One afternoon he kept the lady of the farm trapped in the outhouse for two hours while her husband was in town, marching outside the door with his beady darting eyes taking in everything, daring her to make the twenty metre sprint to the farmstead.

Finding nothing in Pusta besides a small pile of firewood I trekked up to Vysoky Kamen and admired the monolithic rock formations, thinking that here would be a nice camping spot in pre apocalyptic times. Breaking out my map i decided to head to Mogilevka about a five minute run to the west, stashing the map away without glancing at The Dew i started my jog down the hillside.

Halfway down in a break between the trees i spotted smoke in the distance, could it be...a heli wreck ? 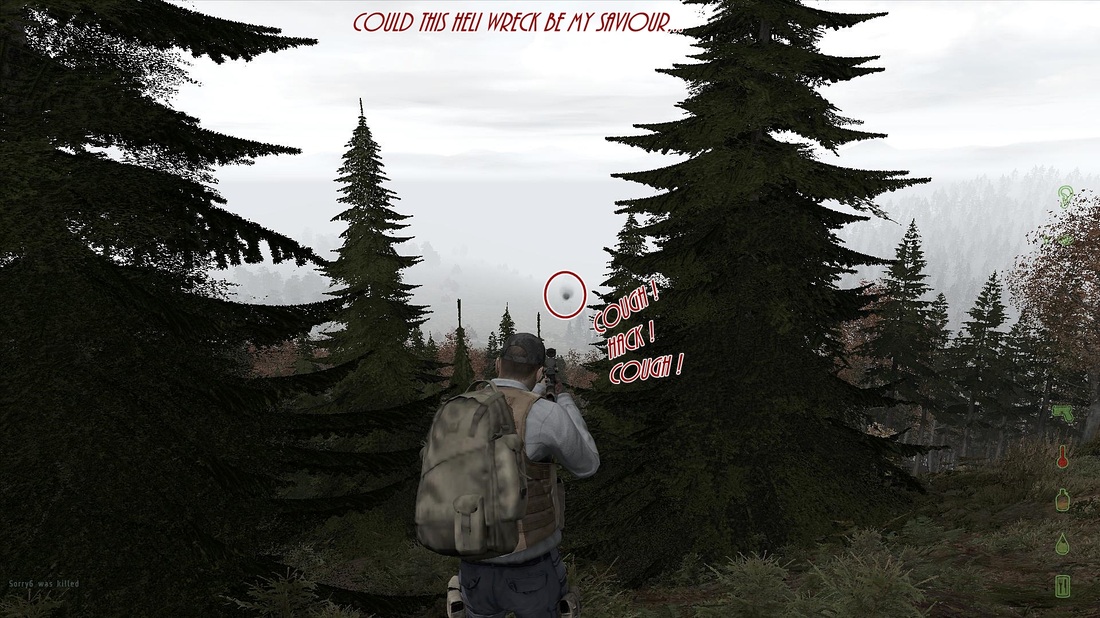 a better chance than Mogi for some meds. I broke into an excited run, hacking and coughing my way towards the downed machine. Several infected soldiers were limply dragging their feet around the smoking wreck, i dropped the closest one with several hits to the chest while his buddies, seemingly unaware, continued to mindlessly amble off in the distance. I crouched above the downed former soldier and rifled through his gear..yes! A small box of tablets in his top pocket, a remedy for my sickness. 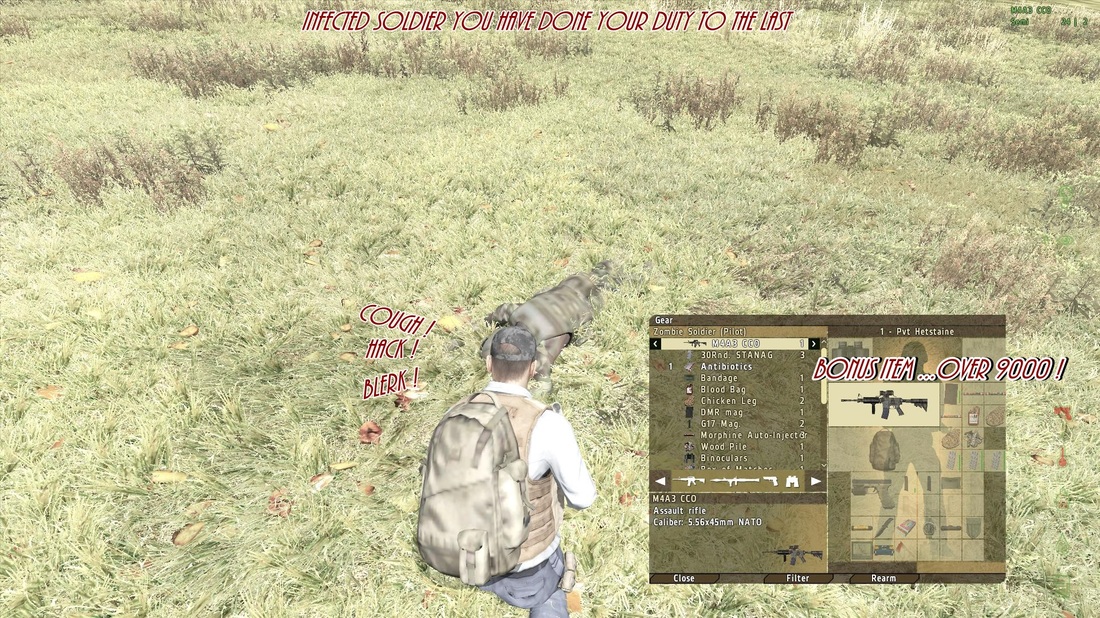 Saluting this once proud warrior i buried him according his service, faithful to the end in his duty to serve the public. I managed to mumble a few words above his grave as i stuffed tablets into my mouth, chewing frenziedly on them like pop candy and wishing i had a drink. Leaving the buried soldier behind I scoped the wreck but could see nothing else of value and quickly pulled my map out again, i would skip Moggy and head straight for Novy instead. It was heaven to not be coughing and drawing attention to myself anymore, and i felt nearly rejuvenated.. the dry tablets, although instantly curing me had soaked all the spit out of my mouth and my tongue was enlarged to the point i felt as if a tennis ball was lodged between my jaws. I swallowed my bitter remedy, slung my pack and headed for Novy.

As i came over the brow of the hill above the heli i spotted an unmistakable shape...the Balota Bull in all of its brown glory was sauntering towards me, no doubt drawn by the sound of conflict and it's desperate primal urge to get in on the killing. Now the Balota Bull, though ferocious, is a slowish moving beast and i knew as long as i stayed away from its finely tuned horns and whiplash tail i had a better than even chance.  I stood my ground as he approached, his mad eyes glistening as they fixed on me,  then the beast charged ! or stumbled towards me slowly and i dived out of the way like a man possessed... 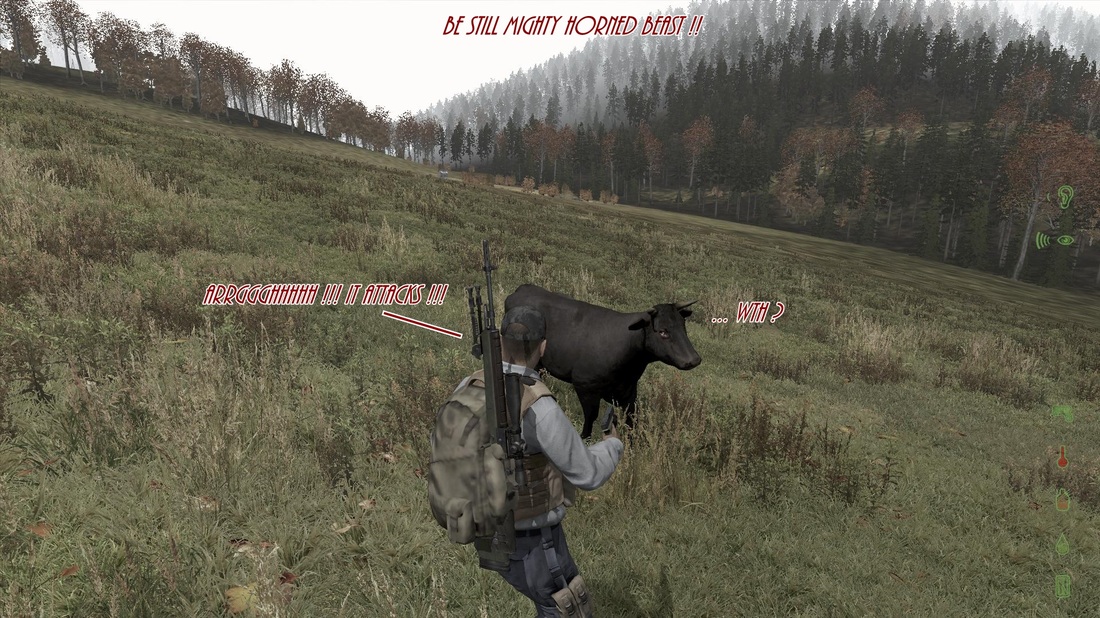 ..bringing up my G17 and pumping a round into its flank, it moved on unaffected and i suddenly understood why this beast has garnered such respect amongst the big game hunters..i fired again and again, i fired until the tears streamed down my face and was screaming insanely DIE... JUST DIE YOU BEAUTIFUL MONSTER!!

I shook myself out of my screaming teary madness and could hear the hammer of the gun slamming down in a repetitive click..click...click. I had put all seventeen rounds into it.

The beast was finally down.

I solemnly carved his rump and with my pre apocalyptic Sizzler™ knowledge produced a stack of 400g steak portions. Deciding my uncooked chicken could be a hazard to my health (also former Sizzler™ knowledge) i used my trusty matches to create a fireplace and had a cookout beside the Bull. Soothing his dead carcass with tales of great animal legends who had been put to pasture long before him and of his mighty Bison brothers he would soon be amongst. Here i also ate and regained my strength,  the medium rare steaks partially curing my dry mouth. 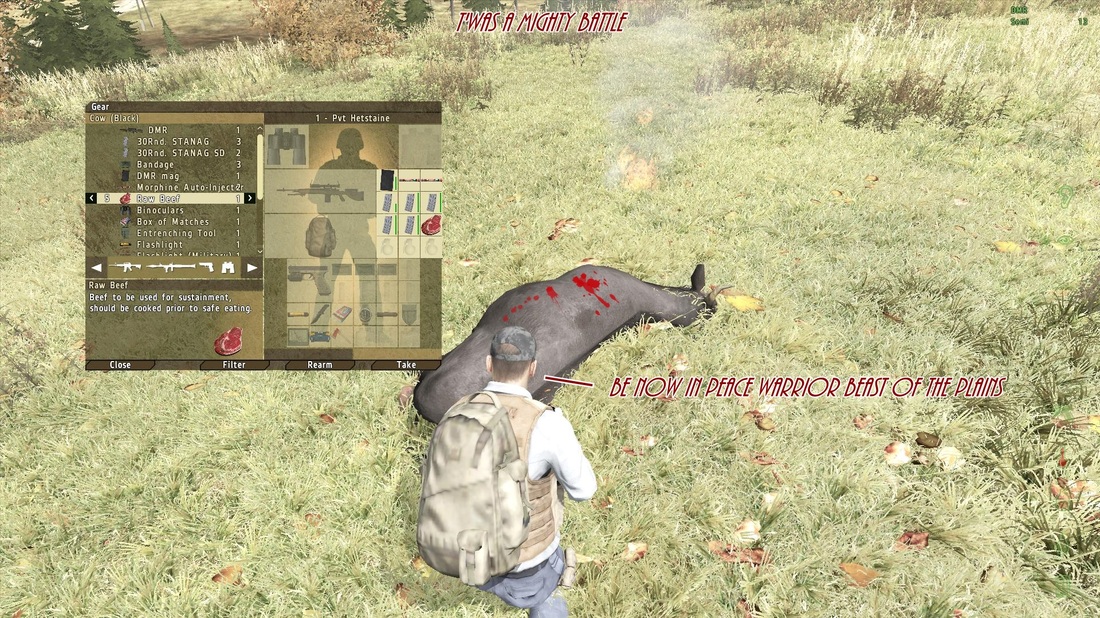 As i slowly arose to move out i spotted a white shape moving slyly above me, the Guglovo goat had entered the Bulls domain now that it was no longer the master of the area. Some said the goat been seen in cohorts with the bull although i had never witnessed them working as a team..but i am not wise in the wicked ways of wild animals. The goat could very well be Tonto to the Bulls Lone Rangerness. Not being able to withstand the anguish of a protracted battle with another fine four legged specimen i simply charged up and delivered the lead mercilessly. As i stood near its now bleatless body, i quivered in fear gazing upon it's mighty head rack, i wiped the sweat out of my eyes and reflected how unlucky i may have been had i not been so decisive. 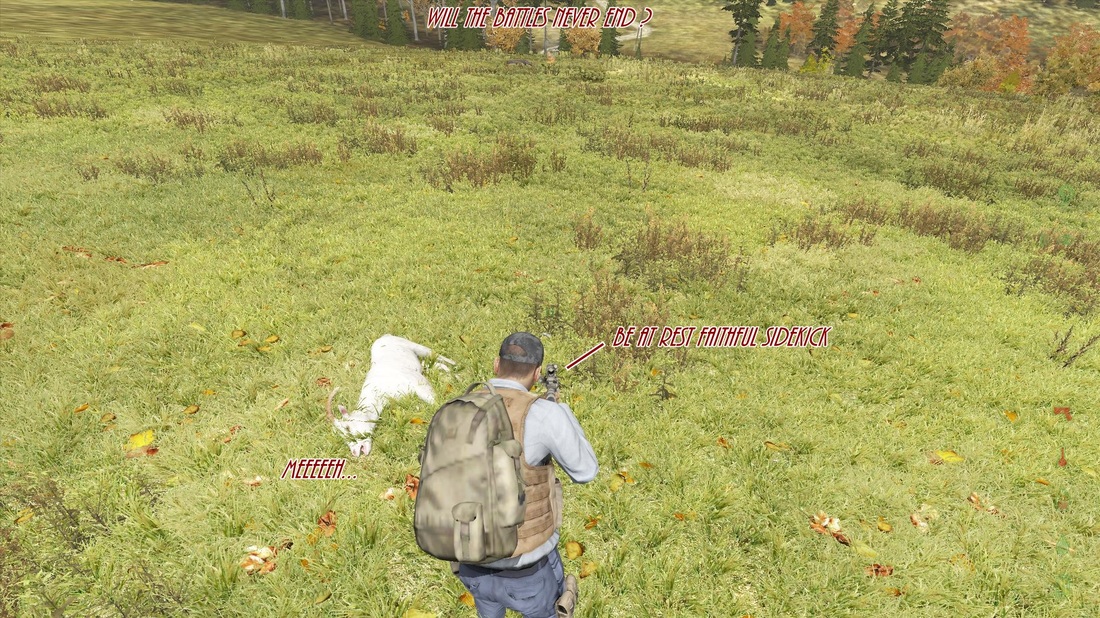 Once again my gutting prowess makes quick work of this short haired warrior and i rush down to my still lit fire with blood dripping fresh 350g goat medallions in hand and sizzle them to a just red in the middle medium. I wipe the blood off on the bulls mighty flank and use his tensile tail hair to floss my steak encrusted teeth, then i am up and running once again for Novy. Three of the fearsome Chernarus Five down, my cough a distant memory and my colour is off the scale.