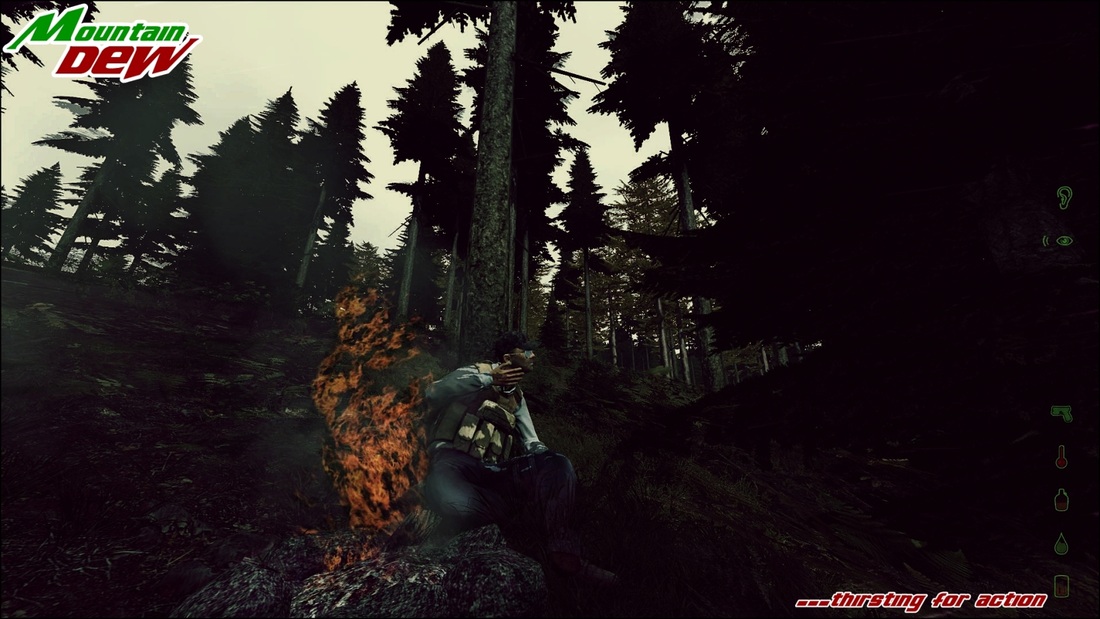 I woke up and took stock of my inventory..three fifths of fuck all.  Wiping fir tree needles out of my eyes i realised i needed to get my shit together, i had been running with this dew like a bitch and getting nowhere, my weapons had been stolen, i was drinkless, had eaten the last of my food and could not shake my cough. Collecting some wood i lit a fire to warm myself, as soon as i felt my bones were warm enough so as not to break at the slightest mention of a rock or doorway i arose and moved out, my first plan of attack, secure a weapon and some antibiotics.

I skirted the edge of Novy only entering one large house, here i found one mag for my G17 , a can of pepsi and a dented unopened tin of food, contents unknown, label missing. A scuffling noise behind me had me whirling, pistol drawn and reloaded. The priest from the previous day was sneaking up on me, his dress swishing beautifully about himself. I shot him right in his faith, and he crumpled moaning to the floor, i popped another sixteen rounds into him lest he rise again. 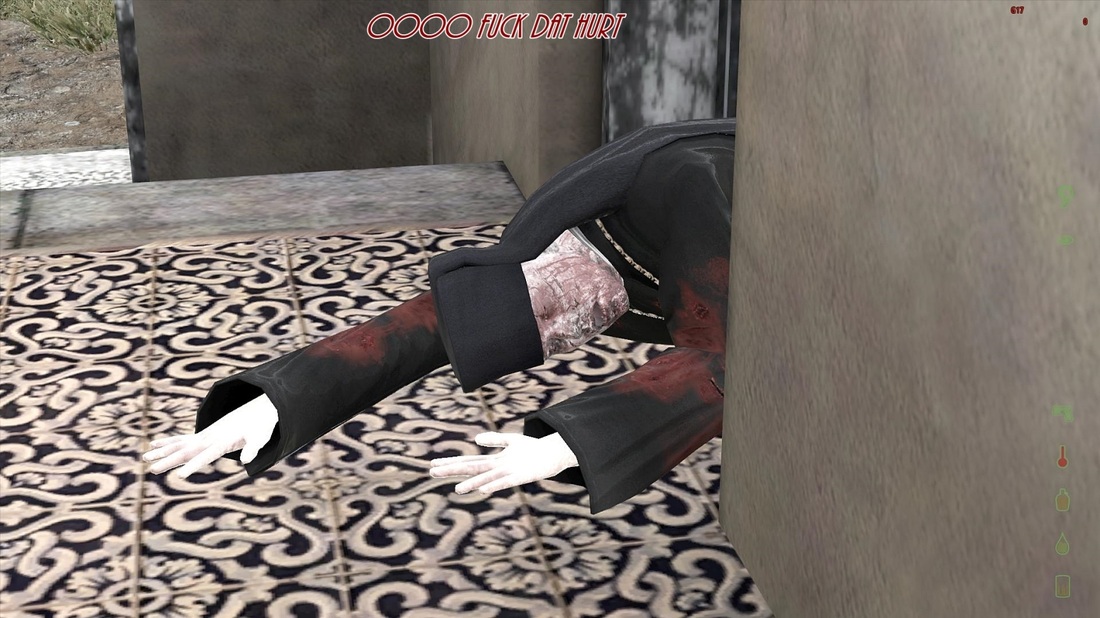 Smashing down my pepsi and eating my surprise tin of food, the surprise was what looked, smelled and tasted like meaty chunks of dog, as the cold tough balls of gelatinised meat slid down my throat i thought had never felt so good. Woof woof baby ! I left the house and started to make my way to Stary where i thought i may be lucky enough to pick up a gun at the military encampment. Running over the brow of a hill i saw a downed helicopter..binoc'd it spotting nothing of interest but something nagged at me so i headed down for a look. A flash of dull mottled greens caught my eye under the tail boom..a larger backpack i had nearly missed as it blended in with the grass and leaves. Sweet, mine was tattered and worn, and a terribly boring shade of infant poo brown. 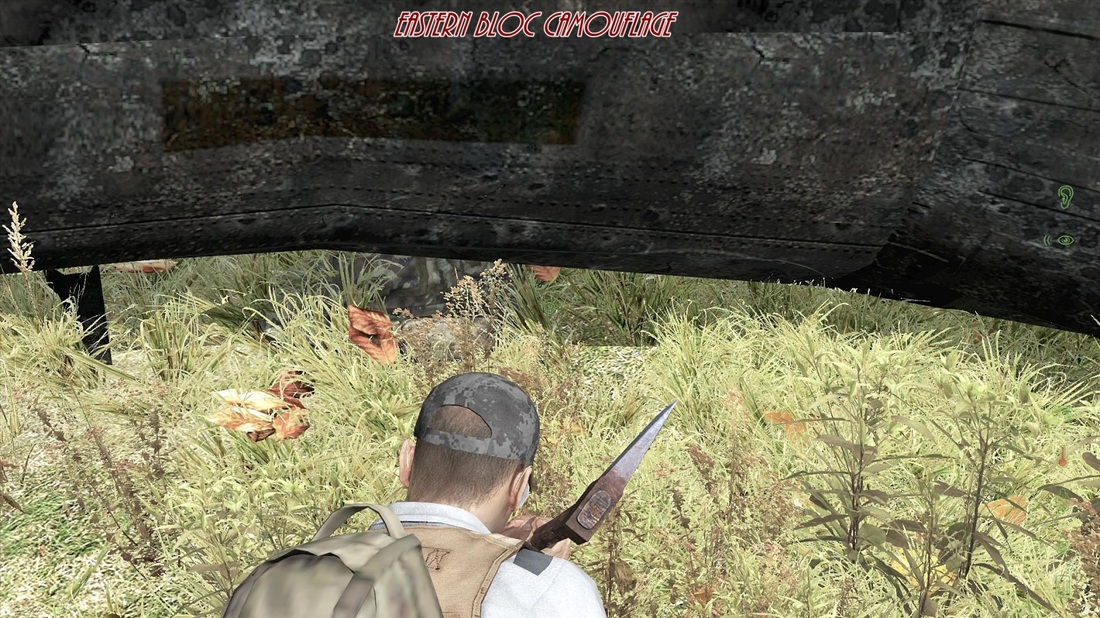 I tried to grab it out but the backpack was firmly wedged, no matter which side i attempted to pull it from it refused to move, then an idea hit me, if the backpack could not moved, then the heli must. I swung my hatchet into action and chopped and hacked at the heli with all of my pepsi max given strength, each wild hack resonating across the fields with a larger than life..'tink'..and it was working. The heli slowly slid, inching sideways until the bag was revealed, i jumped down prone and swapped out bags. 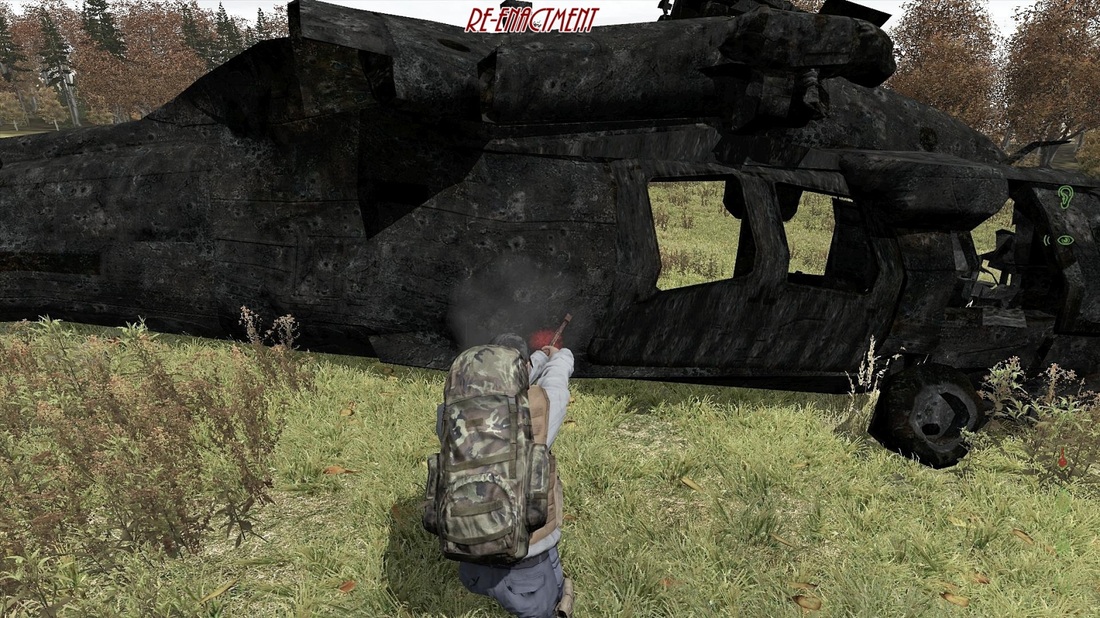 Realising i had forgotten to log this epic moment in my journal i reenacted it so the memory stayed fresh for when i put pen to paper later. After several more blows, my arms burning with the effort needed to move these several tons of dead metal with a wood chopping tool, i headed towards Stary.

Rolling into the tents i quickly scooped up an AK, a packet of cough saving anitbiotics, some MRE's and much needed ammo for my pistol. Not wanting to hang around to long as i could hear heli blades beating the air somewhere nearby i quickly hit the shops ditching a trail of infected, grabbed some more supplies and then legged it to the open fields again. In the plains behind Stary i spotted another smoking heli and then i came across the biggest Berezino Boar i had ever seen, possibly the biggest one outside of some oversized freak boar zoo. He was running in wild abandon, knowing nothing could possibly try and take him on, a Razorback King. 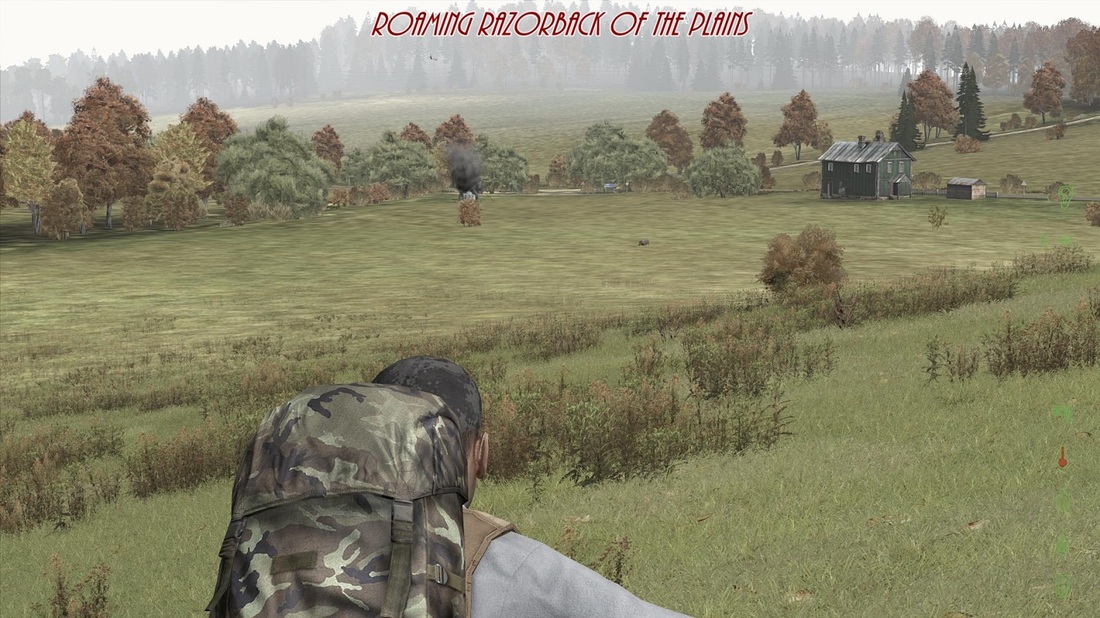 I pulled out my binos for a closer look at this monster. as soon i settled on him he sensed me and turned, letting forth a great grunt he charged and i trembled, feeling the earlier eaten dog chunks wanting to vacate my body via the back door. 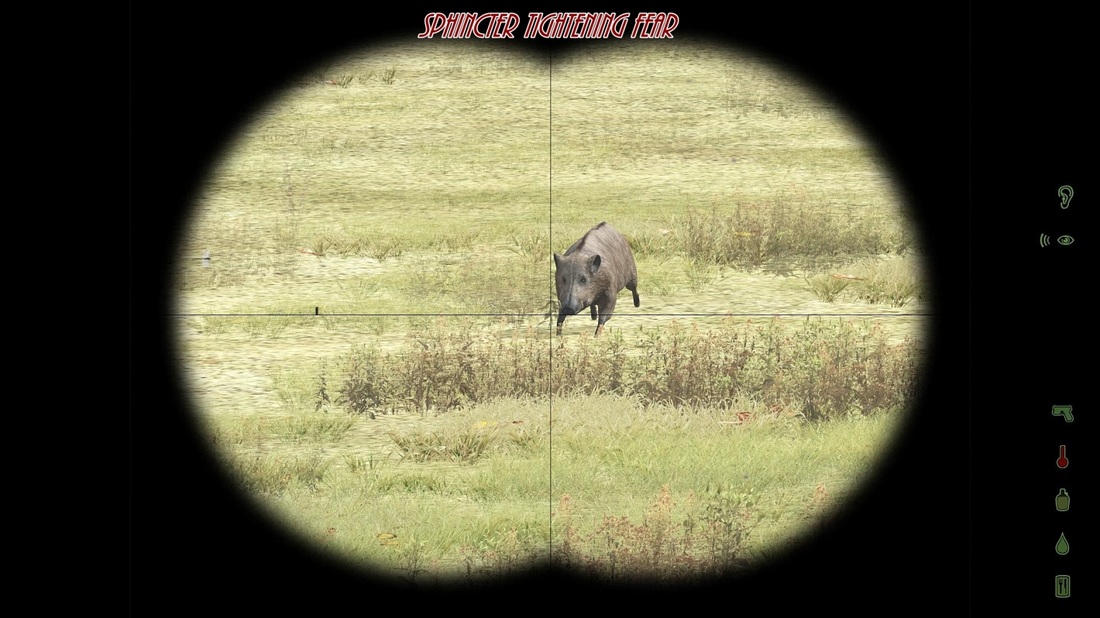 tightening my sphincter i took a deep breath, well over 9000 grams of tusk and muscle bearing down on me...this was no time for fear. I raised my Ak, sighted down the barrel, and gently squeezed.. 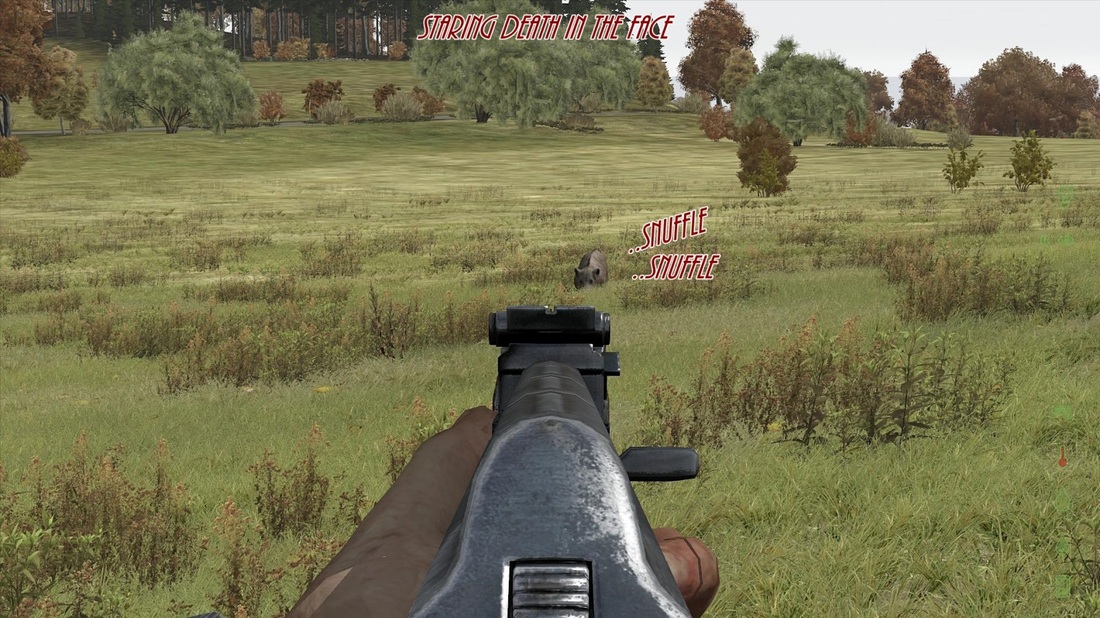 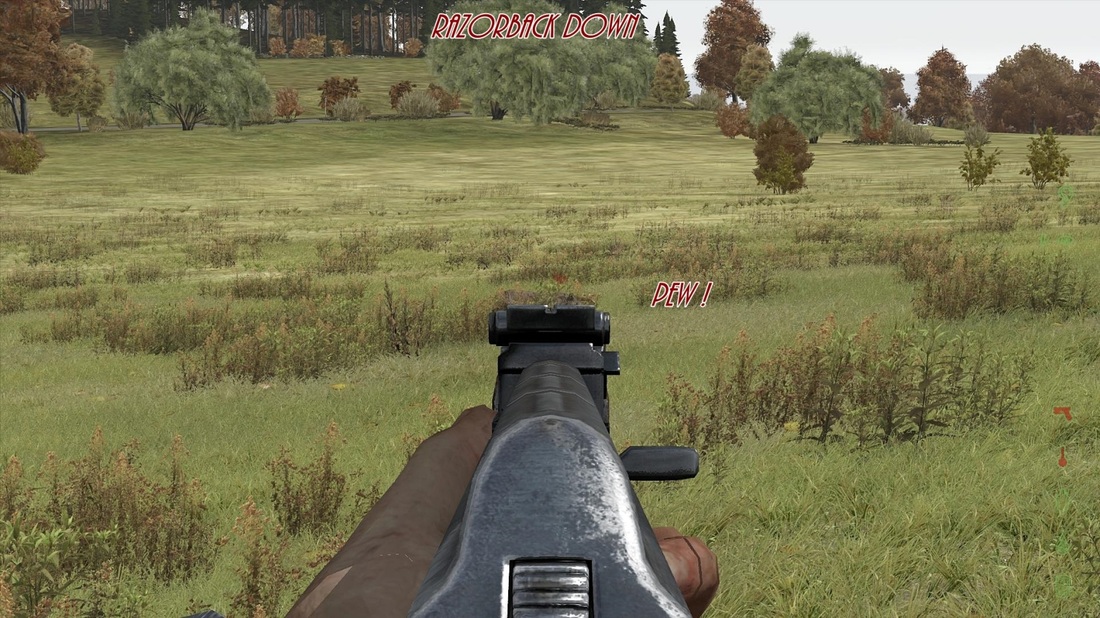 A perfectly aimed single shot right between the eyes and the great beast slammed into the ground, sliding and creating a furrow with its massive snout. I timidly crept closer to him, wanting to take in his great beauty, smell his beastliness. I lay with him, observing the chopper as i sliced off some rashers that would made a butcher green with envy. 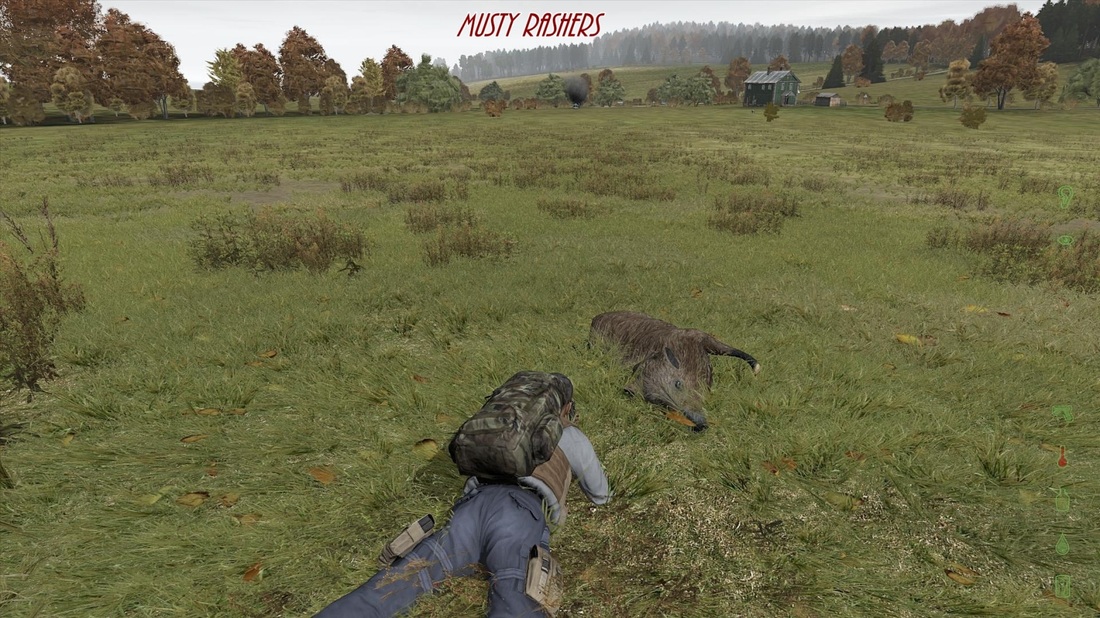 Taking in as much mustiness as i could endure i moved on to observe the heli more closely.. 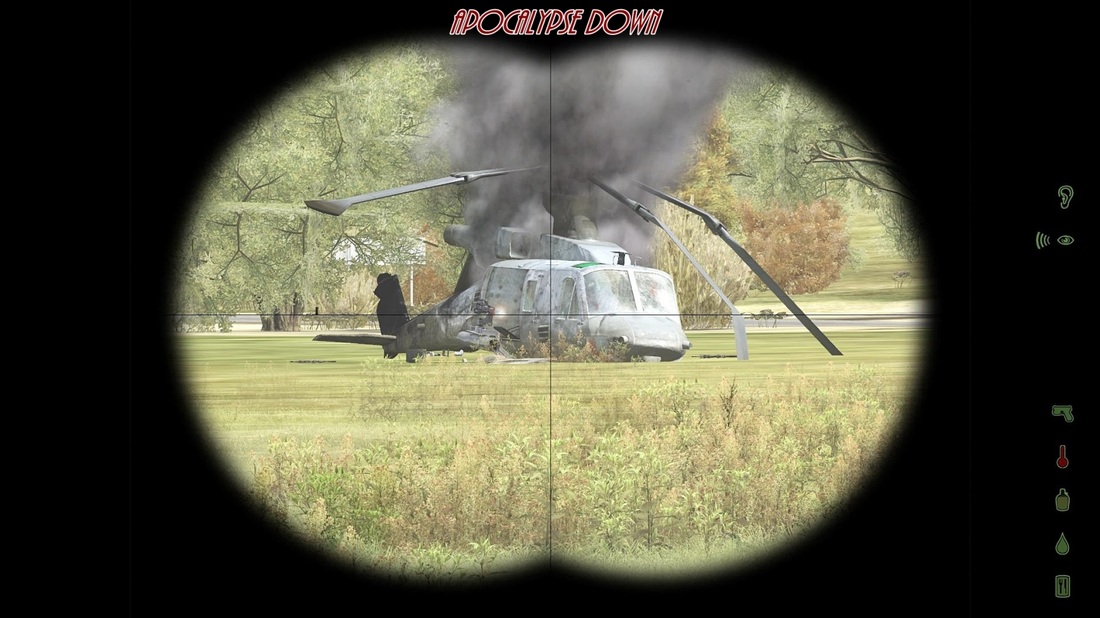 Looked promising, two possibly high powered guns were strewn near the wreck. I ran in like a boss, confidence high after bringing down the razorback, hearing the distant heli blades still beating the air, needing to get to the wreck before they discovered it. I crouched around and scored a G36, a gun i was not familiar with but since there was a full box of magazines nearby i ditched the Ak. Moving around the other side all my dreams came true..i was reunited with my DMR. 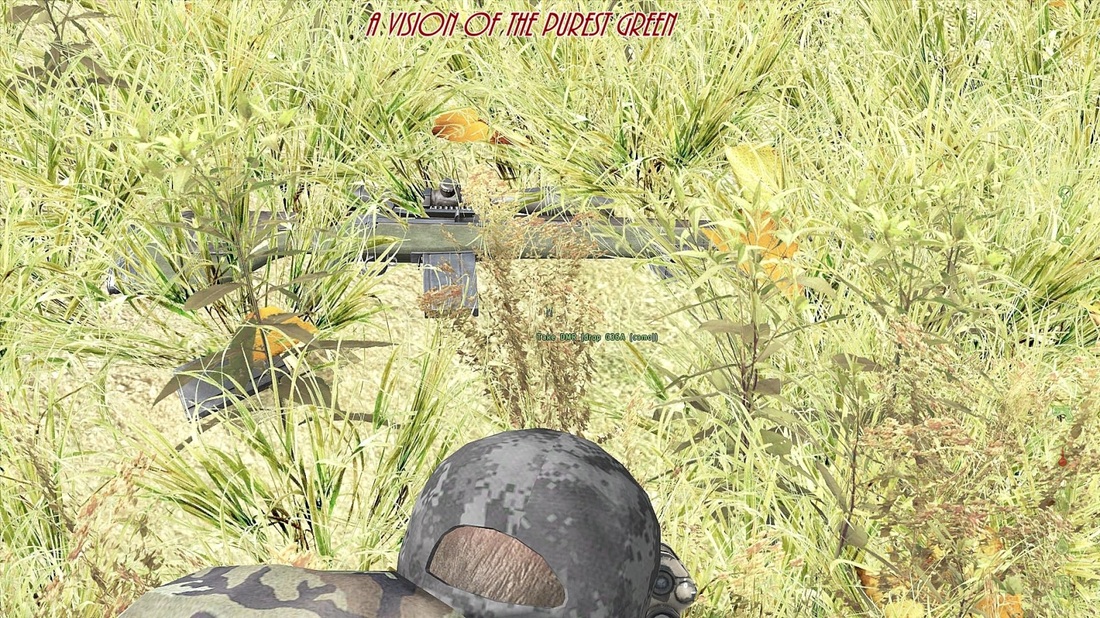 I moved the G36 to my backpack and cradled the DMR like a newborn, caressing it lovingly , licking the barrel..i snapped out of the trance the DMR had put in me and moved away, running for the trees, i must keep moving if i am to reach my planned destination before dark. I cannot arrive there after the sun has moved on.

Jogging along casually, the DMR in my grip, my butt cheeks firm as i thrust myself forward..i knew i could take on anything this terrible apocalypse could throw at me today, and then of course, it did..a quick rushing movement caught my eye..

The Rogovo Rabbit, the Horrific Hare , the Bouncing Beast, there was no good name for this bad bunny. A reputation earned by many a horror story of broken legs and unconsciousness purely by just looking at this Rapid Rodent. I switched to my G36 , having ten stanag magazines i felt more capable than trying to put it down with my DMR for which i only had twenty rounds. Breathing calmly as i had with the Boar, i sighted the Anarchist Animal..and let loose ! 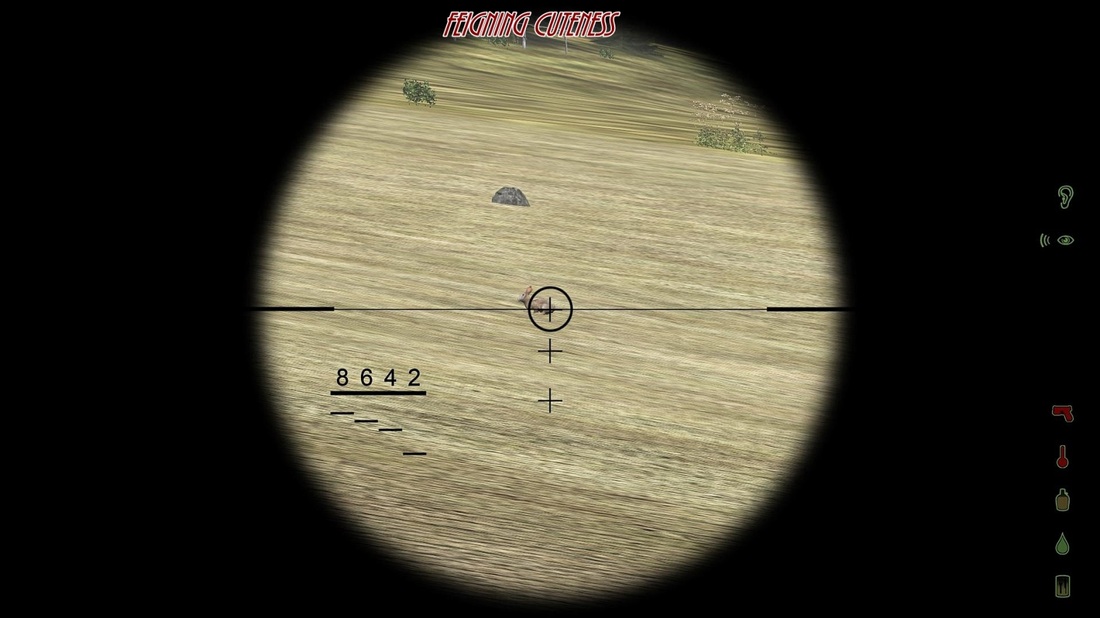 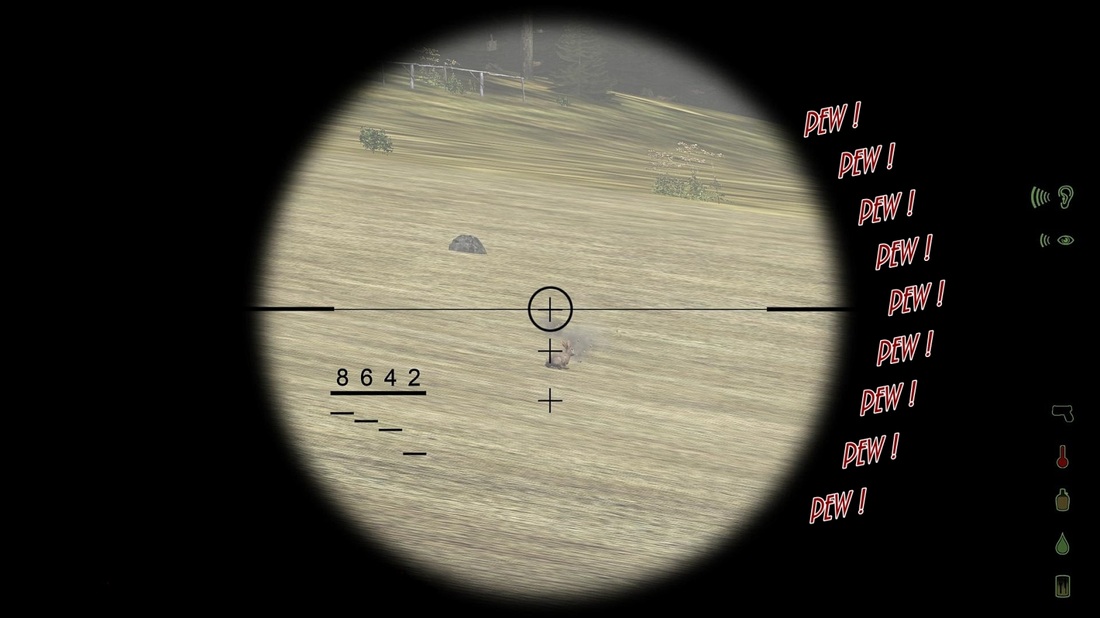 Bullets flew all around it and the Beast simply dodged and turned on a dime, its clever woodland skills judging the shot and reacting accordingly, teasing me with its large and crazy eyes..and then i saw a piece of fluff fly..i had wounded it ! Surely know it was mine..then it changed direction straight into the path of my next shot, blood and meat flew upwards as it took the full force of a round, the impact skidding it across the dead field. Rabbit down. 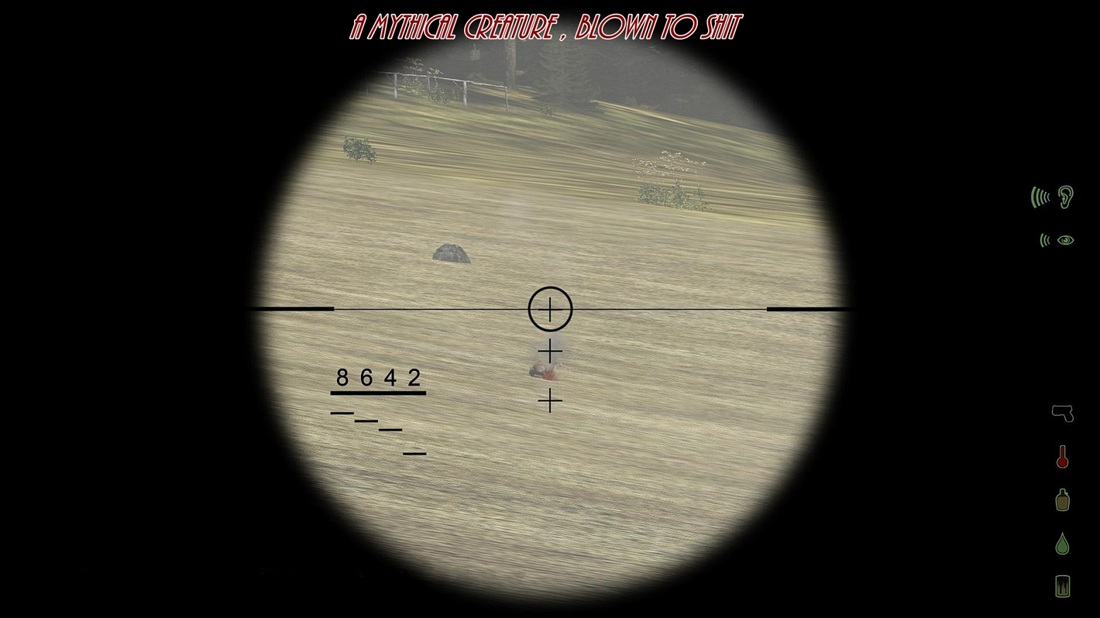 As with the Boar i approached it slowly, unsure if this was simply a trick and it would rise and gnaw me with its buck teeth, but no, its dead stare comforted me. 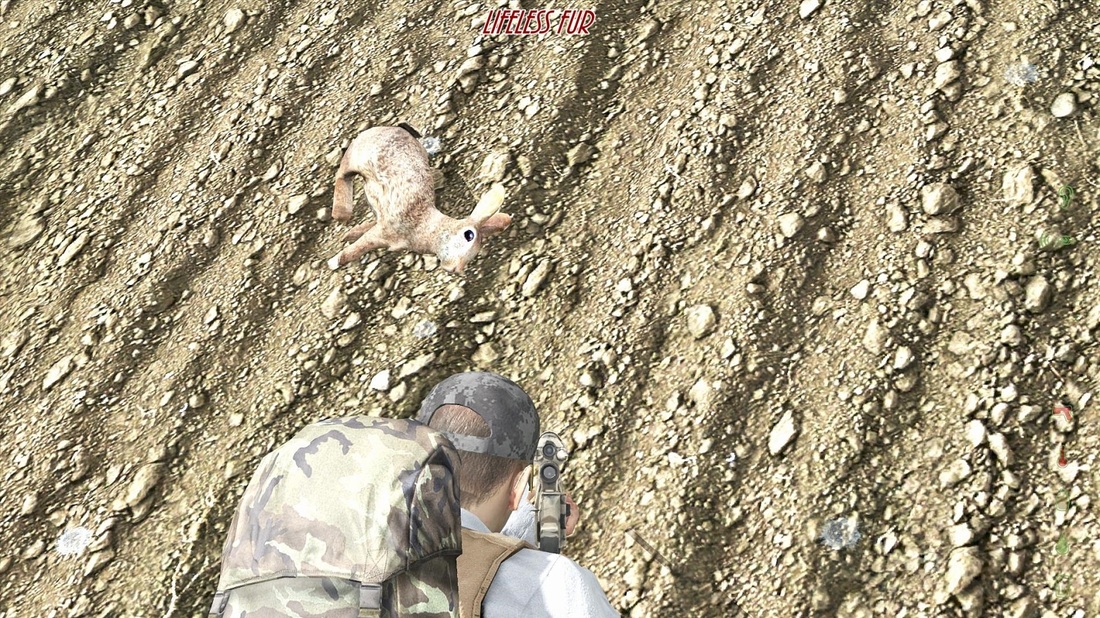 Something in its lifeless eye caught my attention, i scoped it at close range to look into the evil pit of its blackness..and shuddered.. 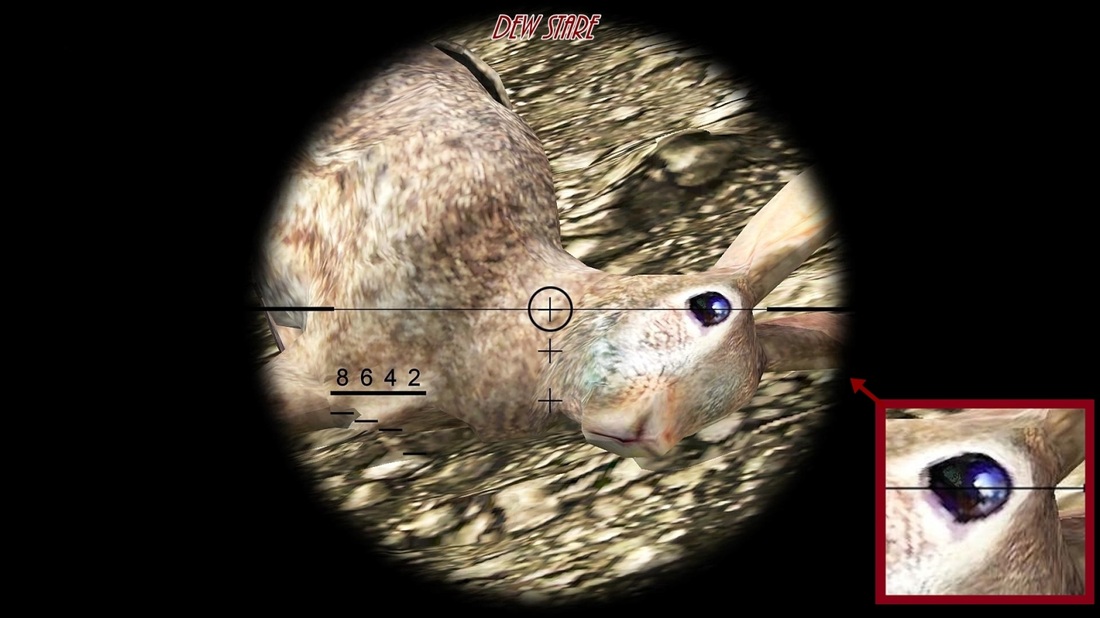 The Dew ! Imprinted on the eyeball..or deep within, fading as i watched. Was it even there or had i imagined it ? Was i going mad ? I had killed the Chernarus Five..was it over ? I thought not as things began to get weird around me. A pattering of feet made me look up , another Rogovo Rabbit rushed past me, blindingly quick giving me no time for a shot..hopping like the wind of a thousand tornadoes pushing it..i shit my dog chunks and ran in the opposite direction. 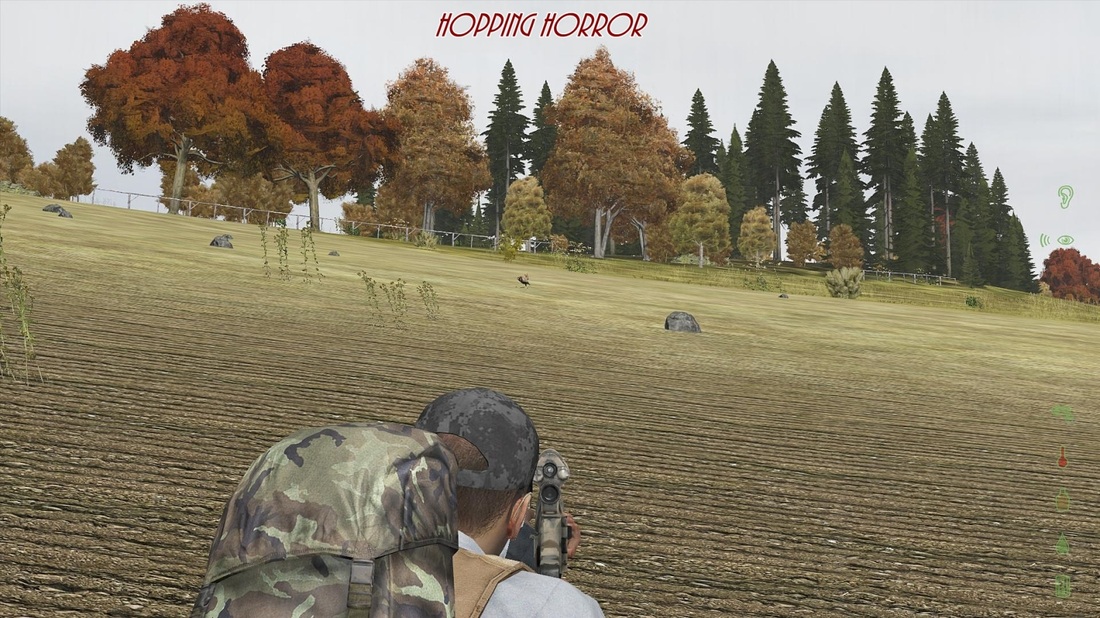 I was thwarted in my attempt to escape as fiction became reality, a Balota Bull and Guglovo Goat teamed up to cut me off..the stories were true... they were working together.. 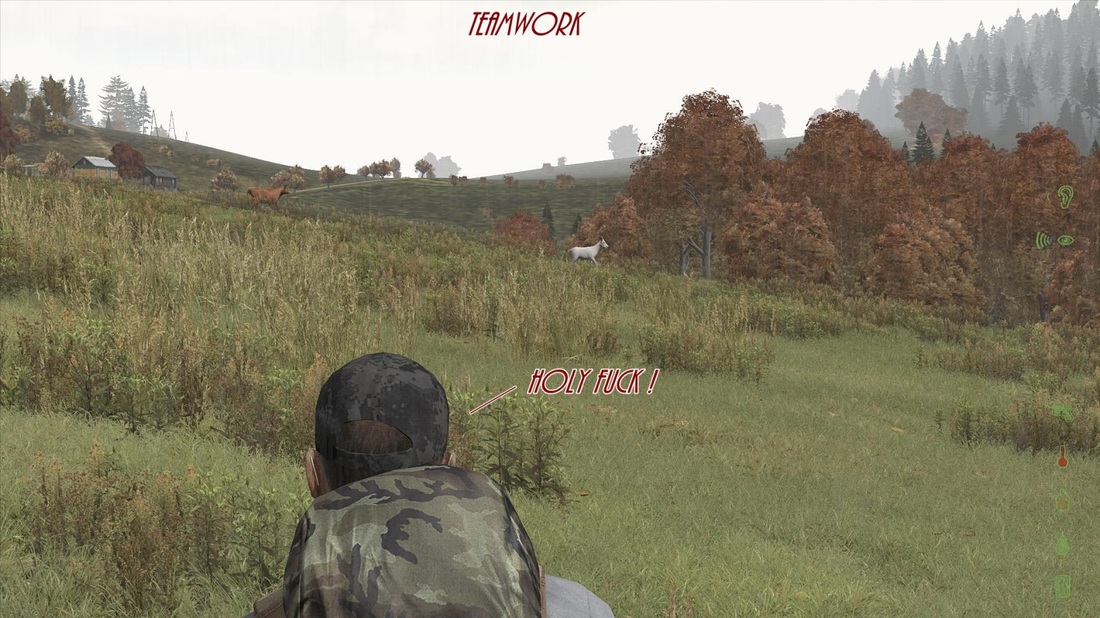 I turned to escape but just as quickly they flanked me, the Goat making a move in my direction.. 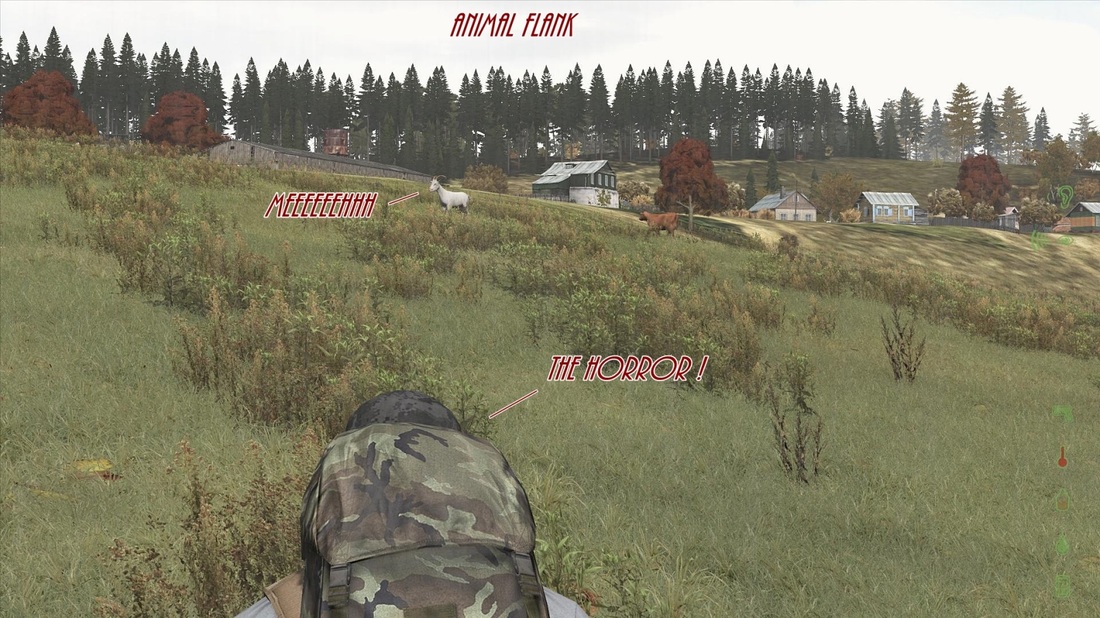 I pirouhetted gracefully as i had learnt in my manly fightclub training, tried to outrun the goat as another Guglovo Gorer burst free from the bushes below me and trotted maniacly to cut off my escape ! I was nearly surrounded, sure to meet my death on the horns of a short haired killer, panic filling every fibre of my body ! 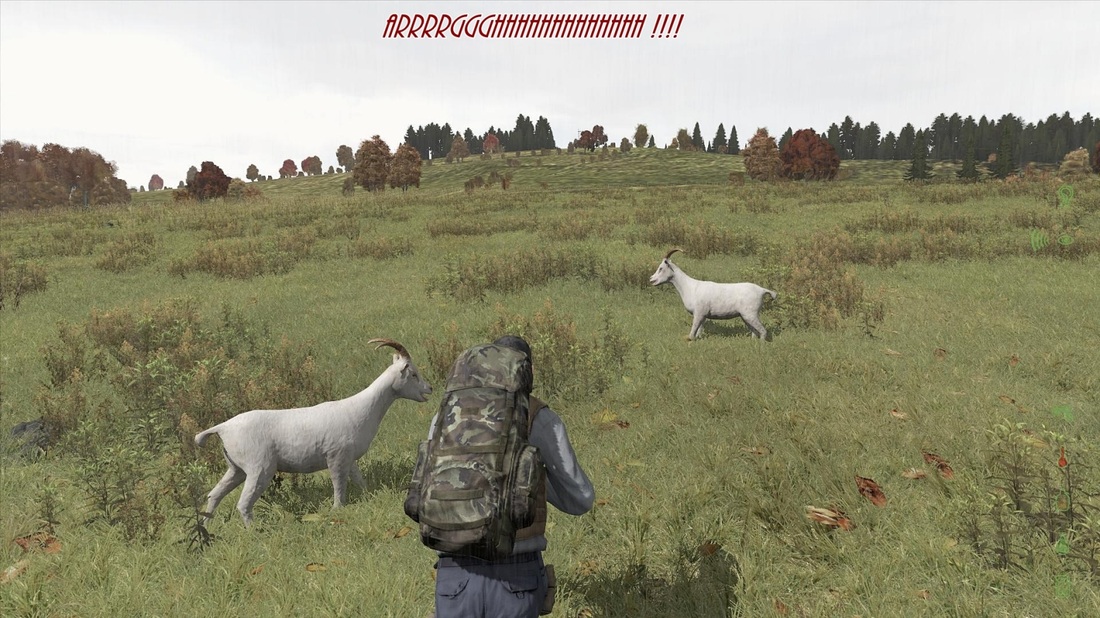 I took my chance, throwing in a doubledubstep and dodged in between, feeling a horn graze and deflect off my tight butt cheek, all my senses heightened, sphincter firmly tightened. 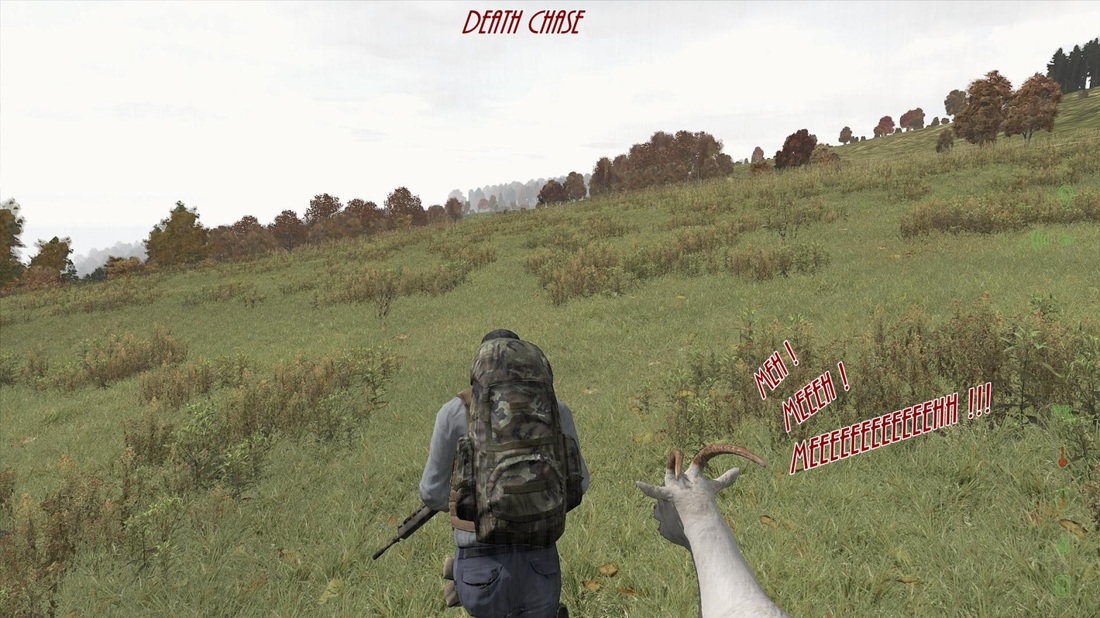 I was past the trap and outrunning the now slowing goats, i had enough adrenaline to fill a patrol pack and slightly overfill into an alice, i ran until i felt i could run no more, but amazingly i did. It seemed i never needed to rest, but i must. I came across a road, the road i knew that would lead me to my destination. Elated in my victory over the Big Five and my many close escapes i did a victory roll, caring not for who saw my mad happiness. 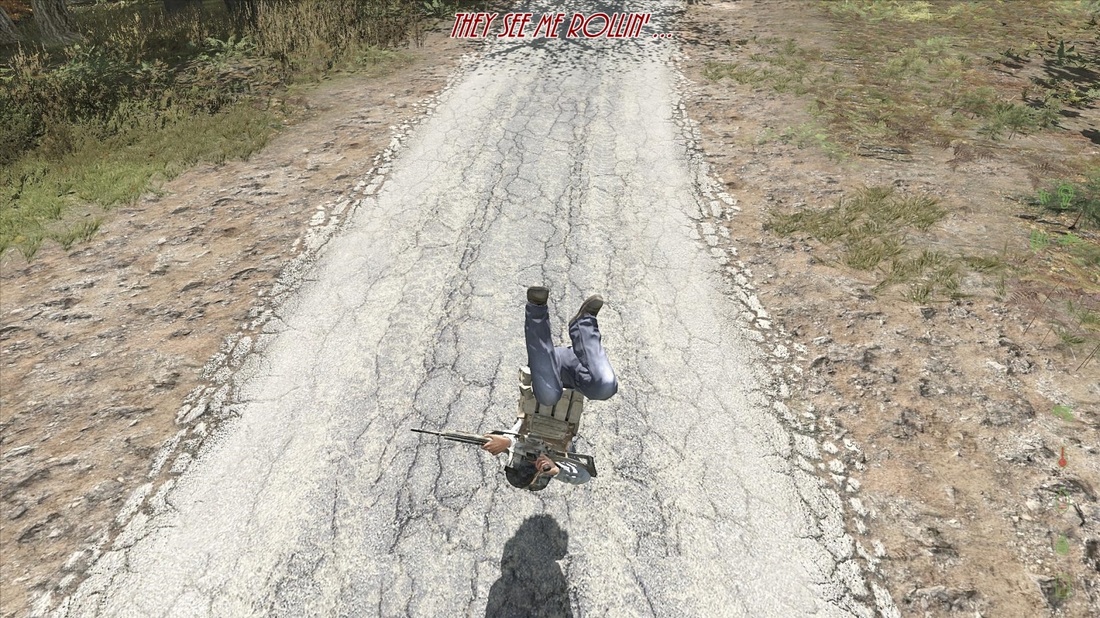