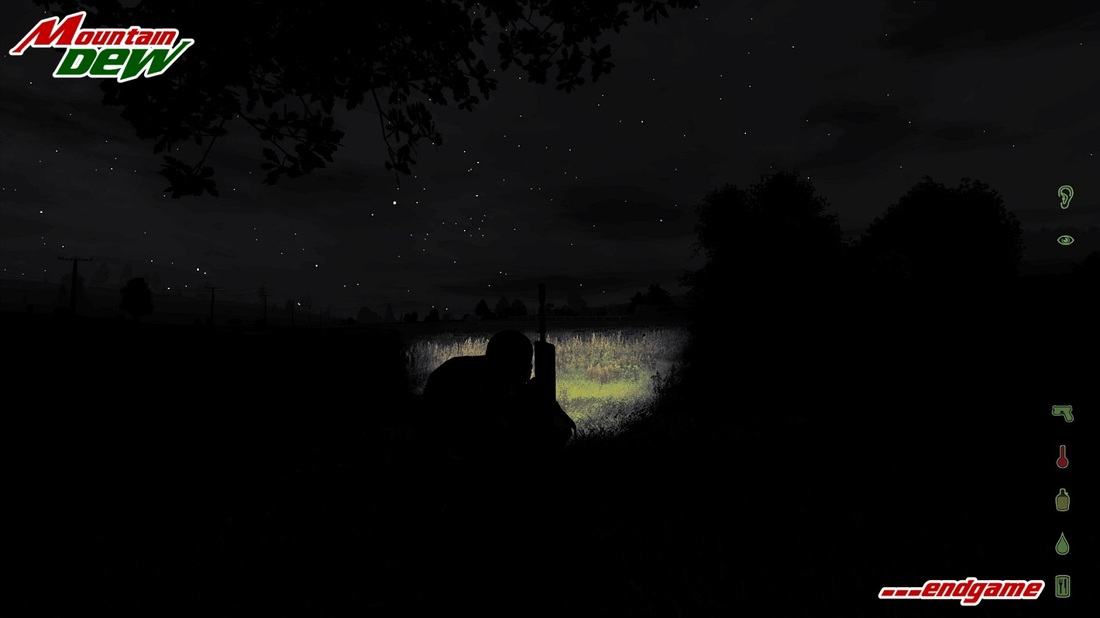 I woke up sharply..i had crashed out in the shade of a tree after my run..fuck! It was dark as sin, a few stars pinholing the night sky.  I checked my weapons, nothing missing, i had my dmr, my g36 and my g17. Rifling through the rest of my backpack i knew i had enough on hand for my final run, food, drink, bandages and a stack of ammo. Lets do it, no time to punk out just because the sun was gone.  I checked my bearings, rose and started heading in a Westerly direction. Five minutes running and i saw a church silhouetted against the night sky..i made it out to be  Pogorevka, i was on track. 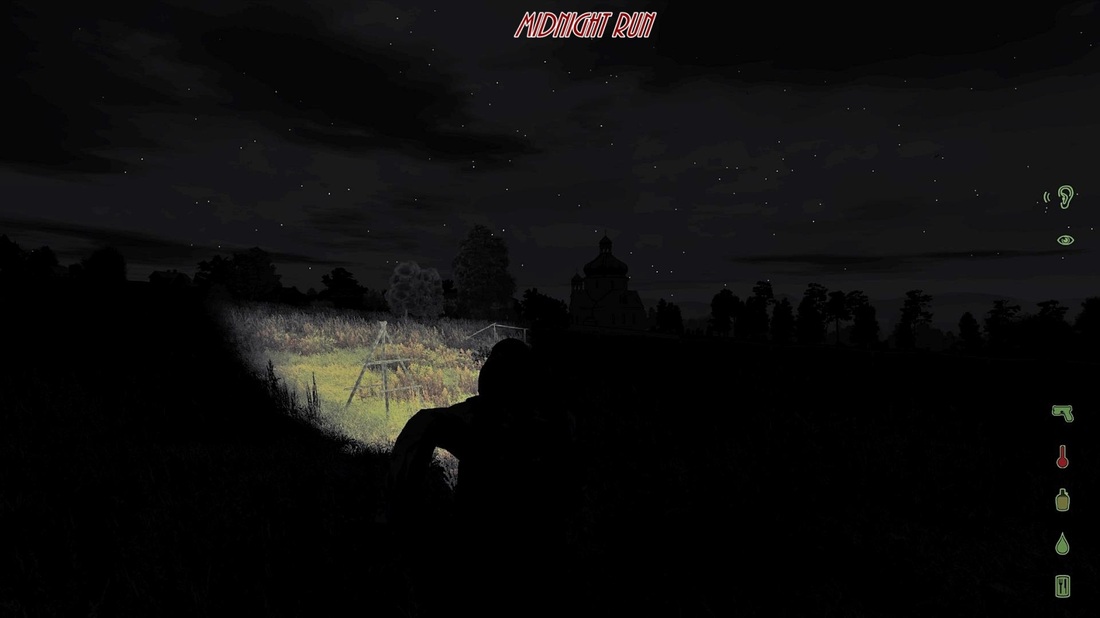 I headed in to Pog, hoping to find some flares or chemlights stashed so i could light the final part of my journey, slipped into the church quietly, avoiding a couple of shambling infected outside. In between the rows of pews i found exactly what i wanted, a pile of flares jammed underneath the old wood, amazingly i managed to fit twenty in my backpack amongst all of my other gear. A groan alerted me to a former citizen creeping up from behind, he took a bunch of rounds and i relieved him of a warm can of coke that i immediately cracked and skulled. 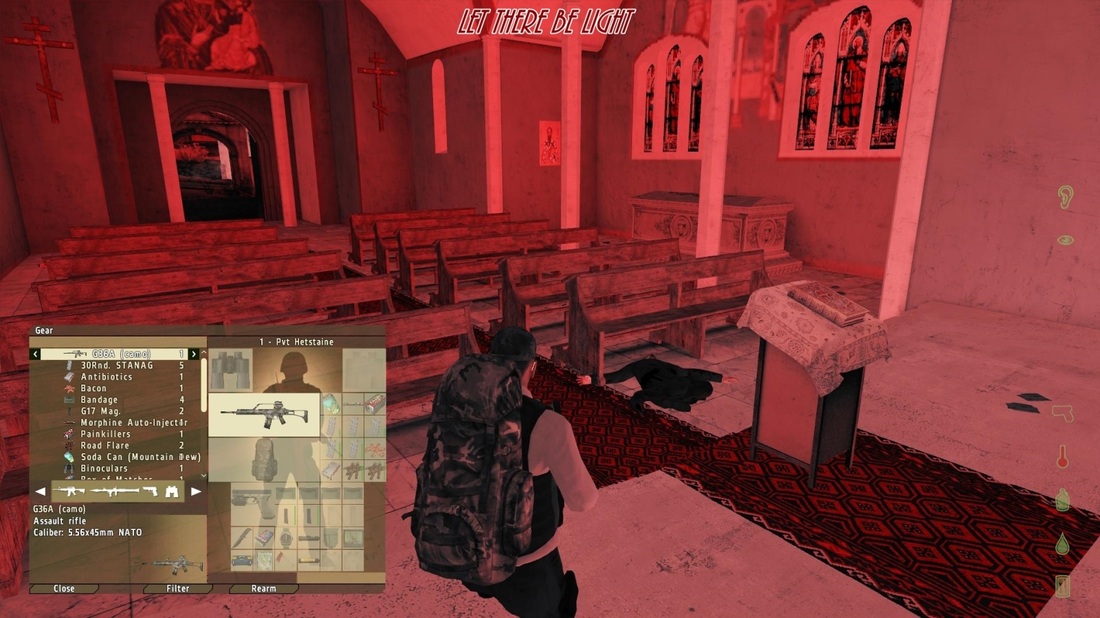 My shots had alerted others so i waited for them to bunch inside and then bolted past the horde and out the door, running down the main street, darting right into a large field. Here i had to turn and take out a couple who gave chase, my weapon lighting up the night and the sound cracking across the open ground. 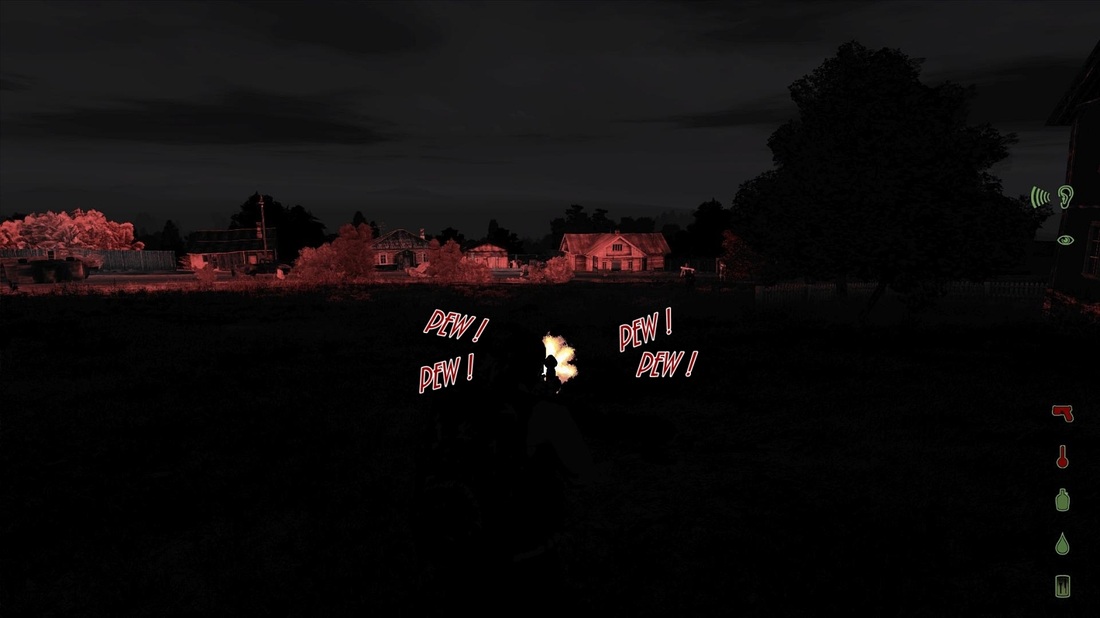 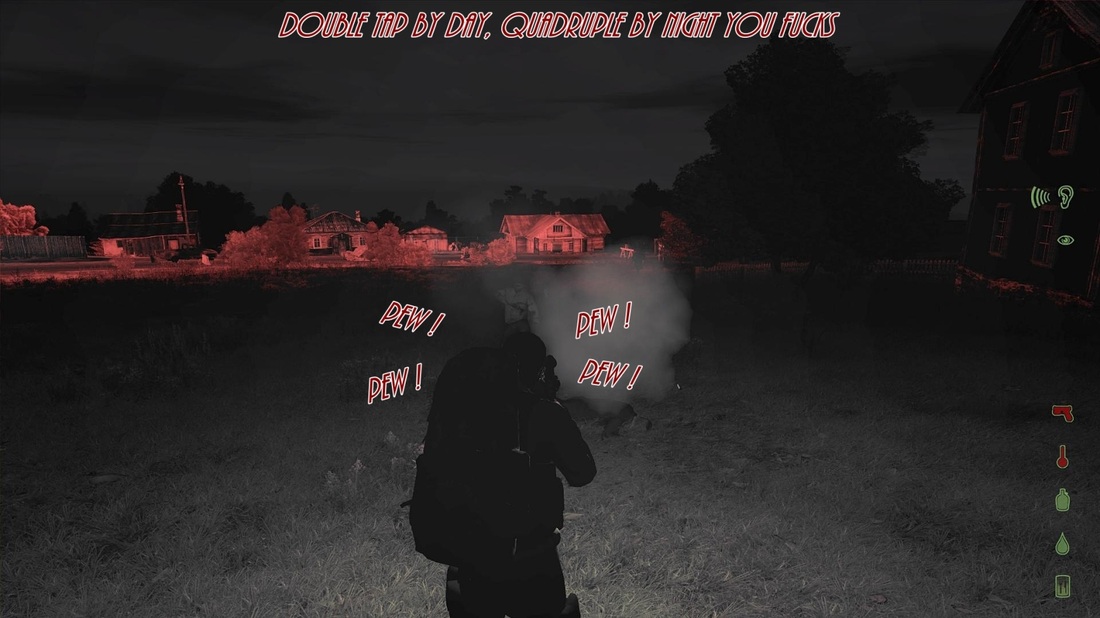 Silence reigned again when the last body fell, i crouched and waited for my eyes to adjust and my hearing to fully come back...there were no more. I slunk away quietly until i was far enough away to illuminate the area ahead of me without attracting more infected, i threw a bunch of flares and finally sighted my destination.. 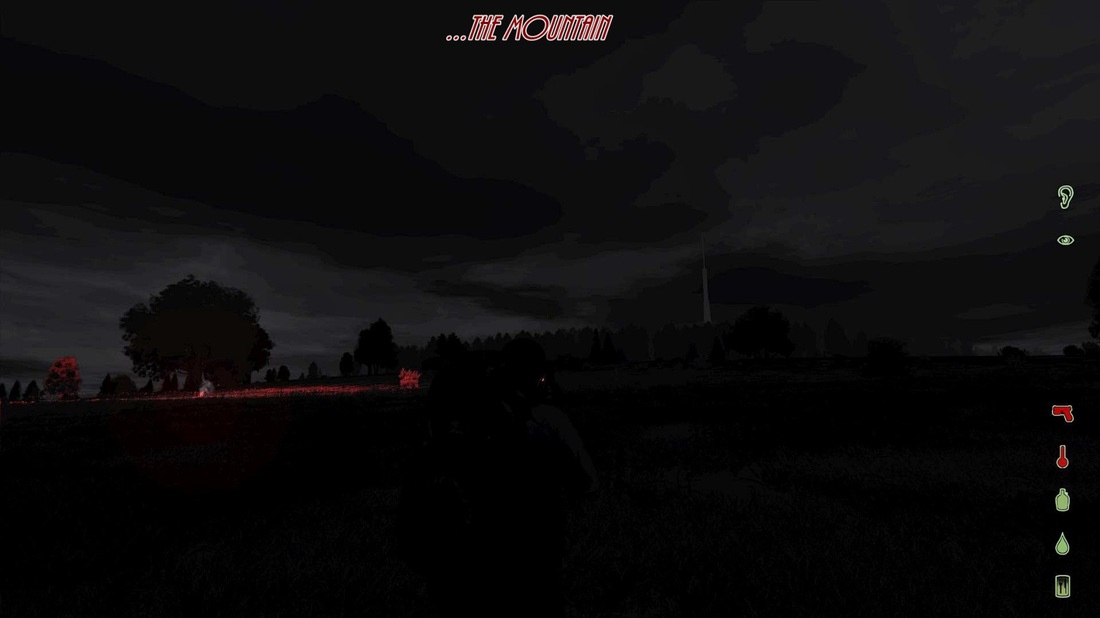 Green Mountain, the massive radio tower perched on top of a large hill from where transmissions may or may not have been heard. Stories of random broadcasts, survivors trekking to and never returning, the mythical slenderman of pre-apocalypse internet fame..the place where i felt i must take my Dew. Why ? i did not really know, i just knew this was the place where i must find out if by drinking it i could lift the curse, somehow end this madness, maybe save Chernarus. At the very least i would relieve my mouth from the taste of coke and pepsi. I was sick of both.

I crept closer to the treeline and popped a few more flares, they hardly penetrated the forest.. 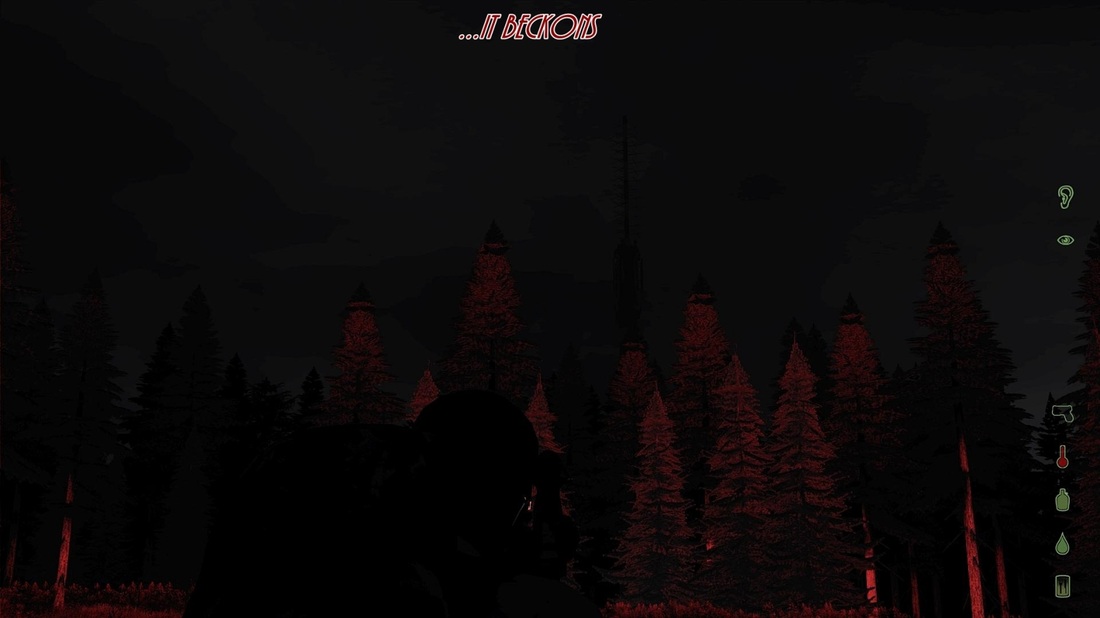 I hesitated, wished that one of the many empty Jacks bottles i had seen contained at least a hint so i could smash a hit, but no..the alcohol was always the first thing to go. Fuckers. I stepped into the red tinged forest and forced myself up the hill towards the tower, stopping every couple of metres and listening to the night noises . The swishing of the breeze through the trees could have covered a hundred unnatural sounds, someone or something could have been directly beside me and i would not have heard them. Twitching nervously I moved on through the inky blankness, cursing the sound my footsteps made on dried leaves and the snapping of twigs i could not avoid. 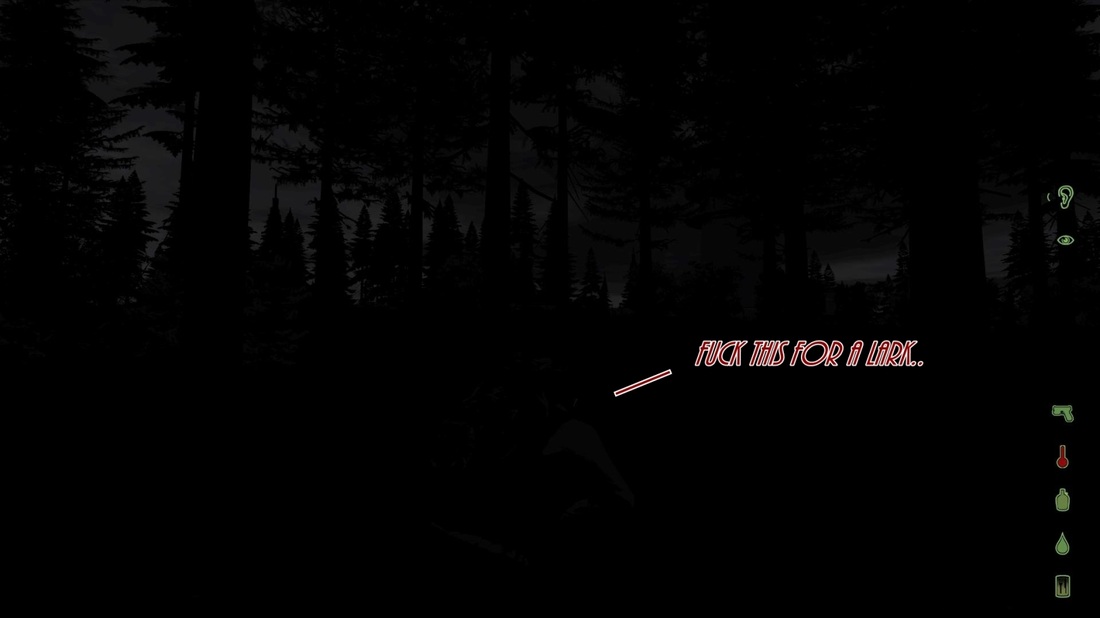 The sky was my only light source now when it peeked through the canopy above, i was saving my flares for the area surrounding the tower when a shape slowly formed in front, despite myself i flicked the light on my G17.. 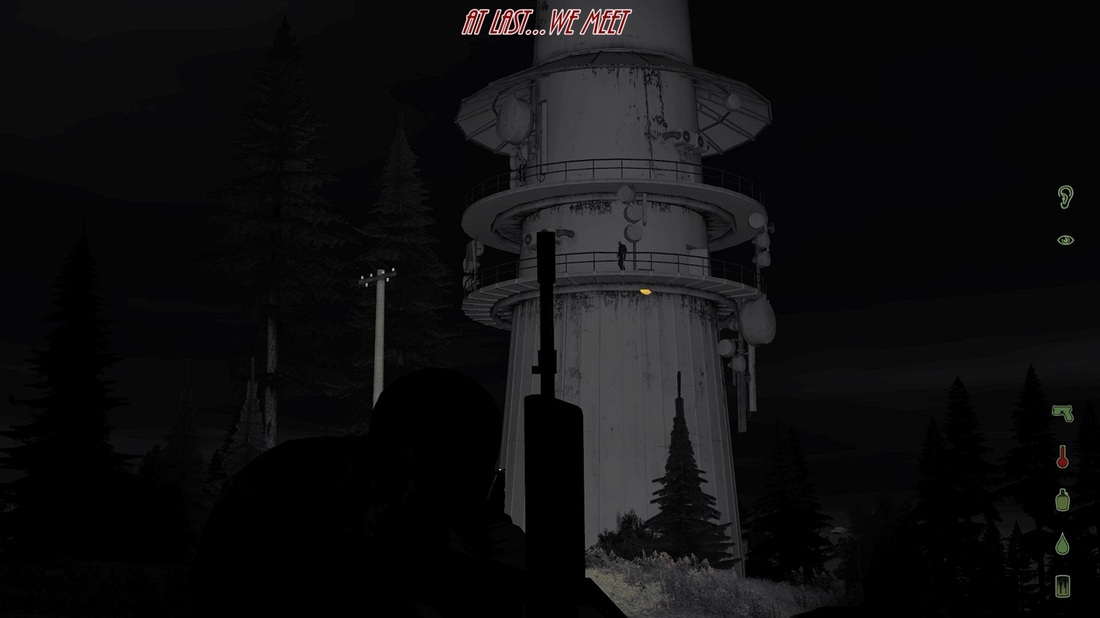 The Tower..i was here. I swept across it with my light, an infected seemed to patrol one of the lower platforms, flicking left and right, raising his arms in weird gestures, he looked fucked up. I scanned my light down towards the entrance, a bunch of infected working their way out onto the road..some towards me.. 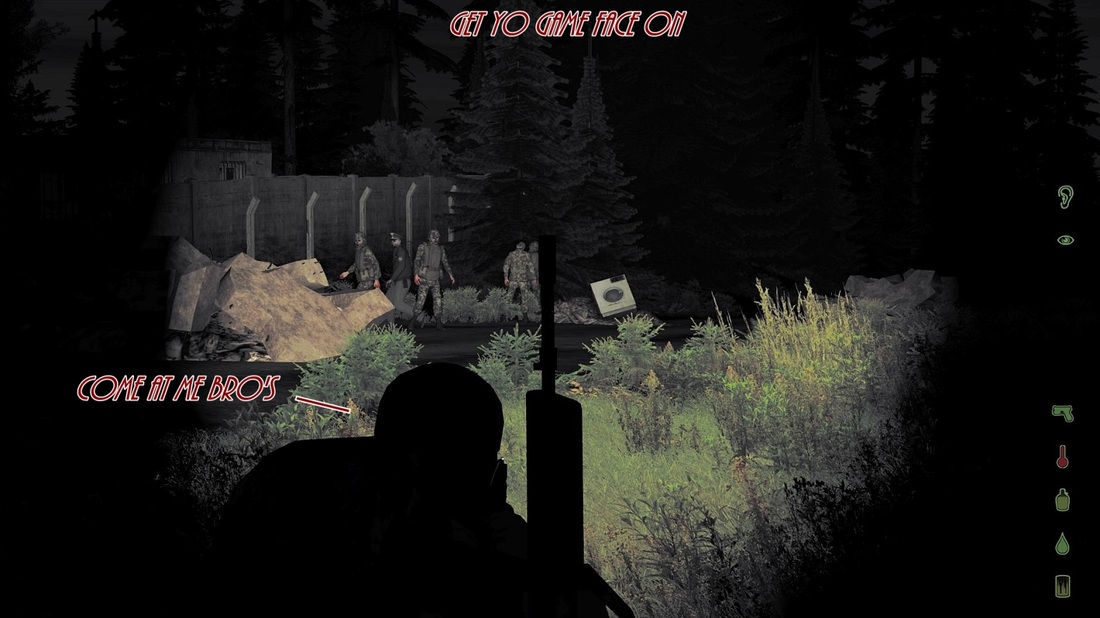 No fucking around, i holstered my G17 and swung up my G36..party time bitches, ammo to spare. Fire spat from the end of the barrel, one infecteds chest pulverised by the impact, the rest running rapidly at me.. 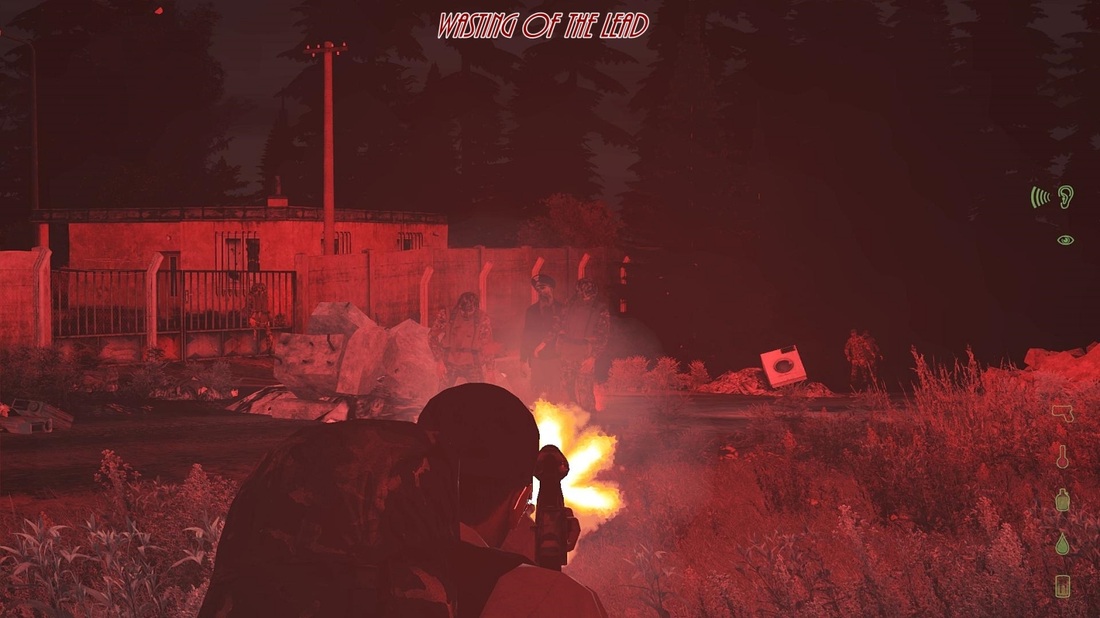 I moved back slowly, spraying them, reloaded, fired again bringing more down, retreating but not panicking. Click click, empty again, reload, fire, click click..fuck! I never reorganised my ammo earlier and i had two mags on me with under ten rounds each..idiot! The rest were in my pack, no time now ! I was hit from behind by one and sent sprawling to the dirt, reopening my chin wound from my bicycle incident..you dirty mole! I slung the G36 and unholstered my G17, switched on the light, turned and fired, blew his face off. 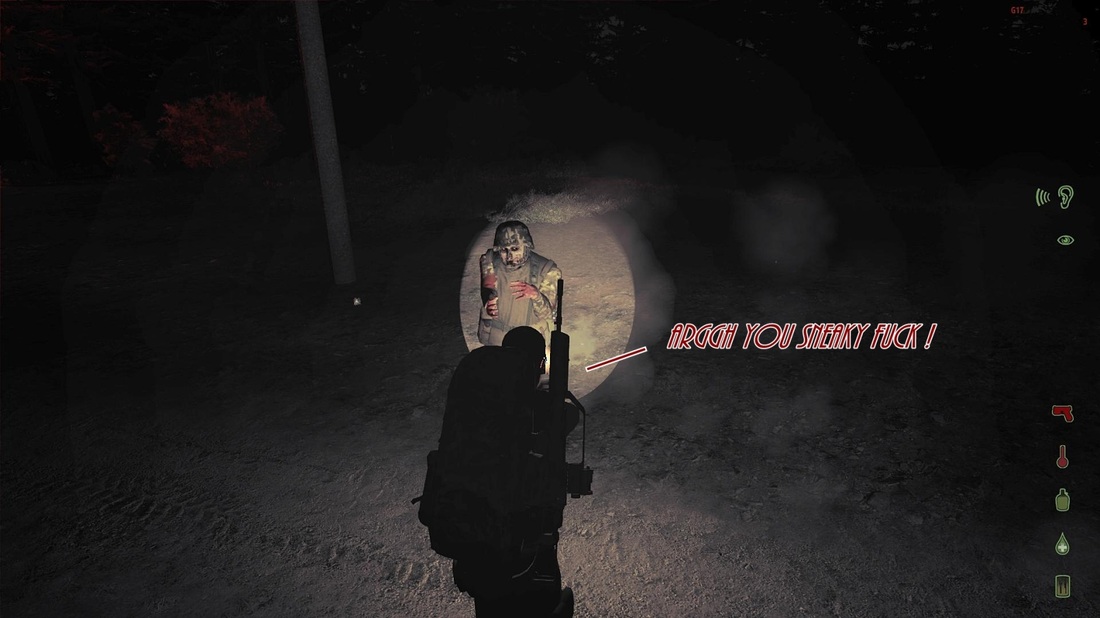 I needed to bandage my chin, it was pissing out everywhere and spoiling my only white shirt, i dived away into the bushes and hid behind a large fallen log. It seemed i had taken them all down as none followed so i slammed on a bandage to staunch the flow from my chin, then looking deeper in my pack saw the skinned rabbit from earlier. Man could i go some of that ! I piled up some twigs, lit up a bunch of leaves and cooked that dirty little demon within sight of the tower. Already having a mouthful of blood i decided ten seconds was a perfect sear time to remove any unwanted fur and shoved it into my mouth, dripping and hot, beautiful. 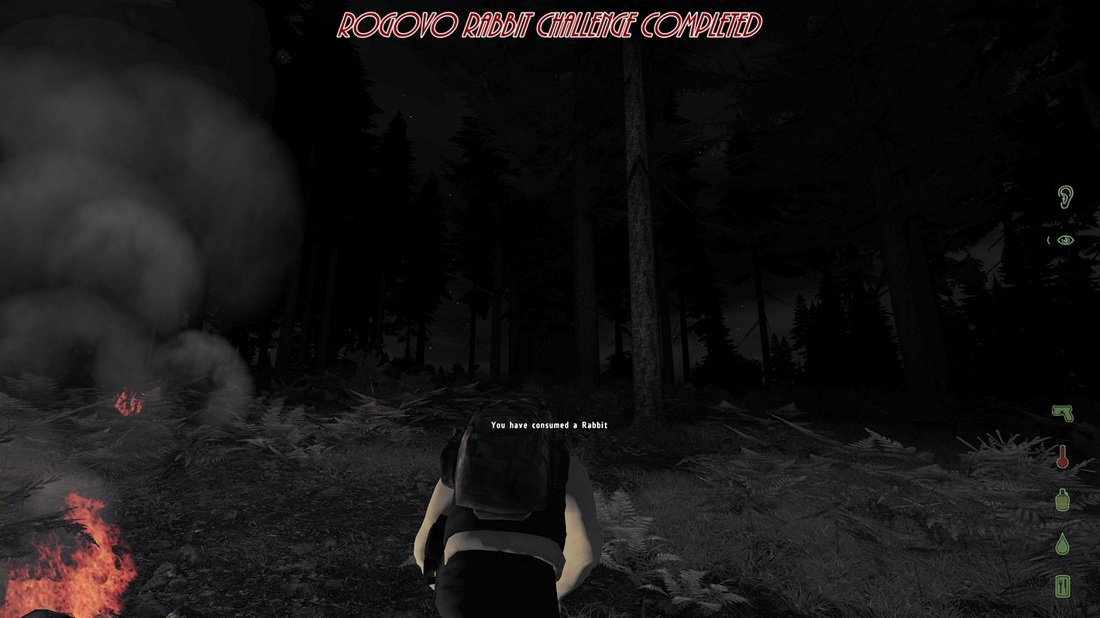 I kicked some dirt on the fire and moved a stack of mags out of my backpack so i would not be caught out again. If i didn't get my shit together soon...i would become just another Green Mountain myth. I headbutted a tree out of frustration and moved back up to the tower, popped a bunch of flares out, bolted straight through the gate and into the swarm of infected, started firing madly. 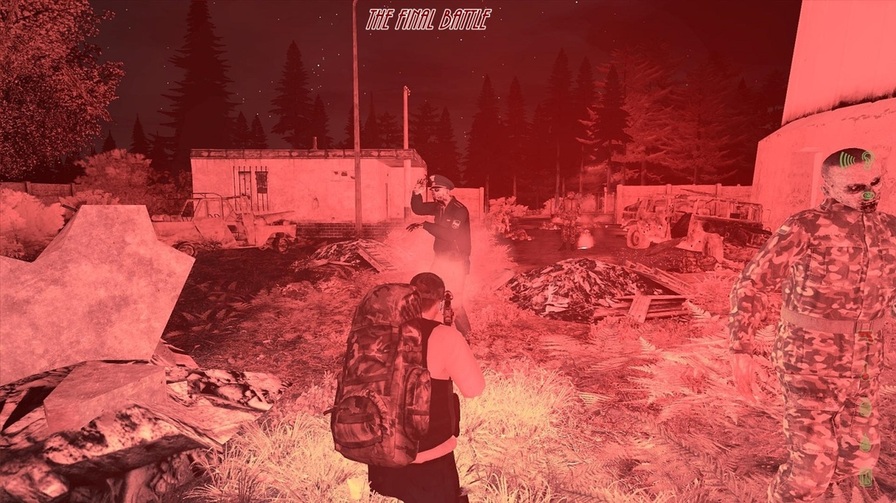 The infected were coming from all sides and one had managed to get behind me while i was reloading, i took a hit to the back of my forehead and stumbled forward, clumsily pushing the new mag home. 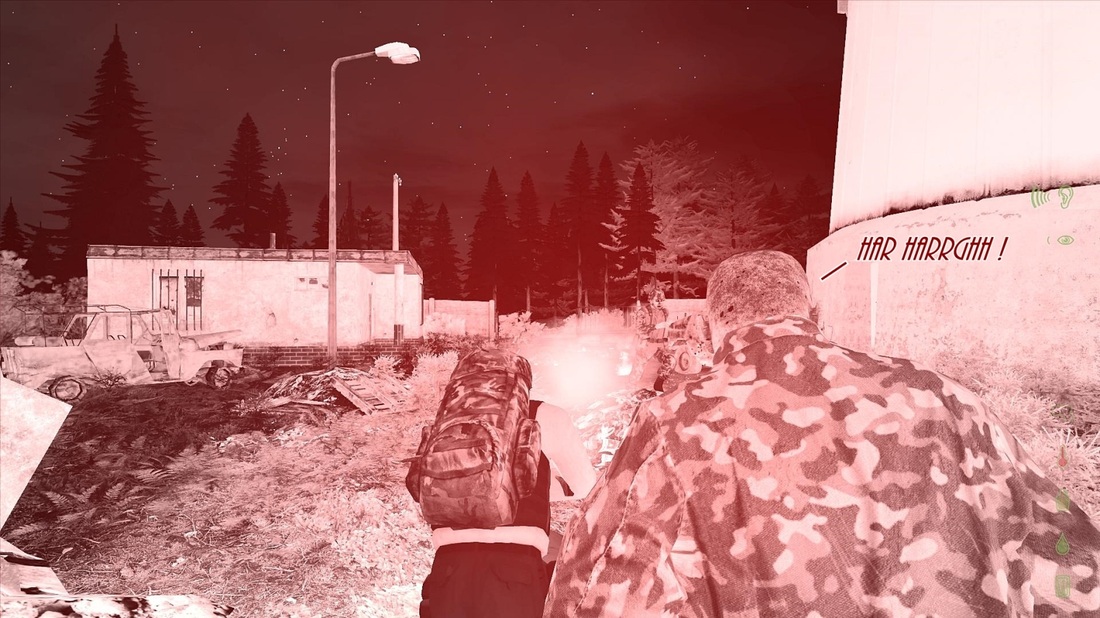 Just as i was about to pivot and fill him full of lead he hit me again and my foot caught in something solid on the ground as i was turning, i heard the sharp crack as something snapped, that something feeling like my fibula. I screamed out in pain and anger, not here..not fucking now ! 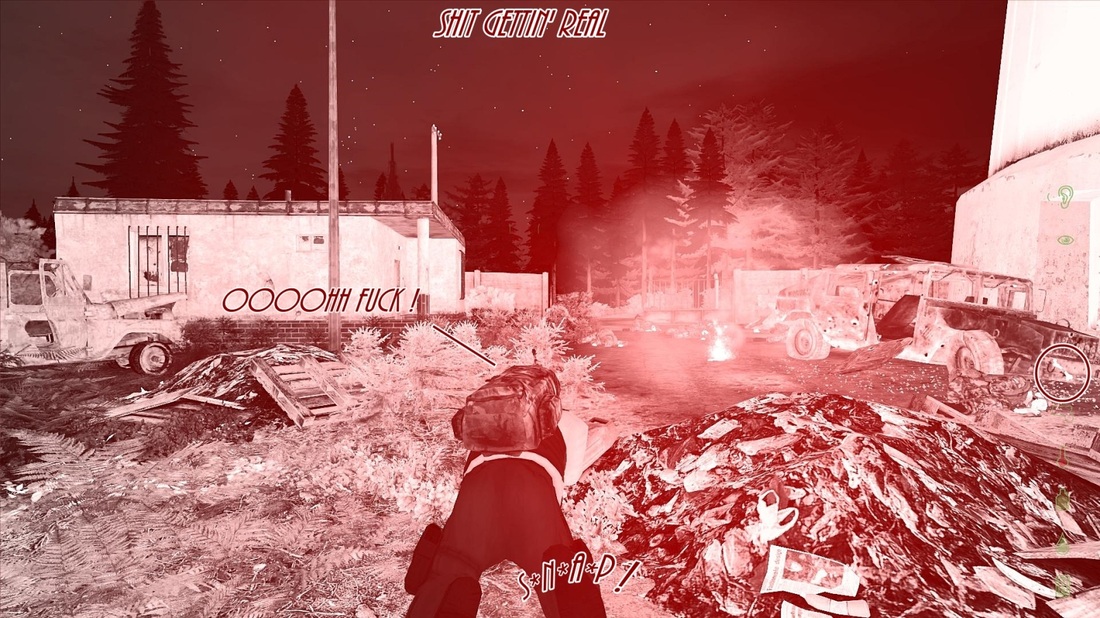 I hit the ground hard ripping of my chin bandage, blood pissing everywhere, a group of infected was closing on me, i started panic firing madly, sweeping back and forth into them. 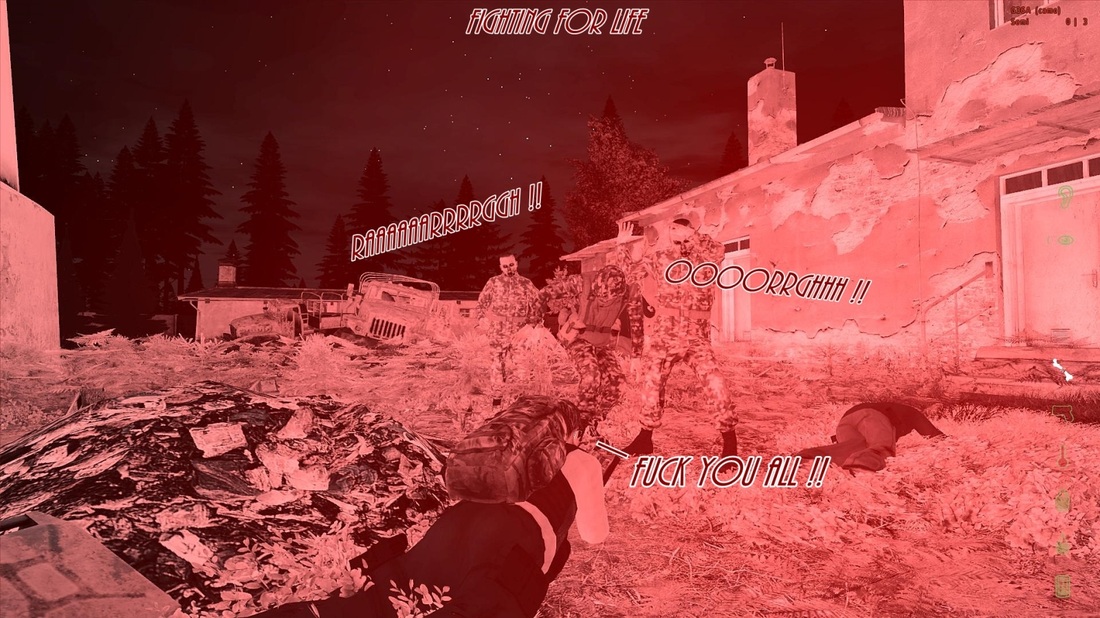 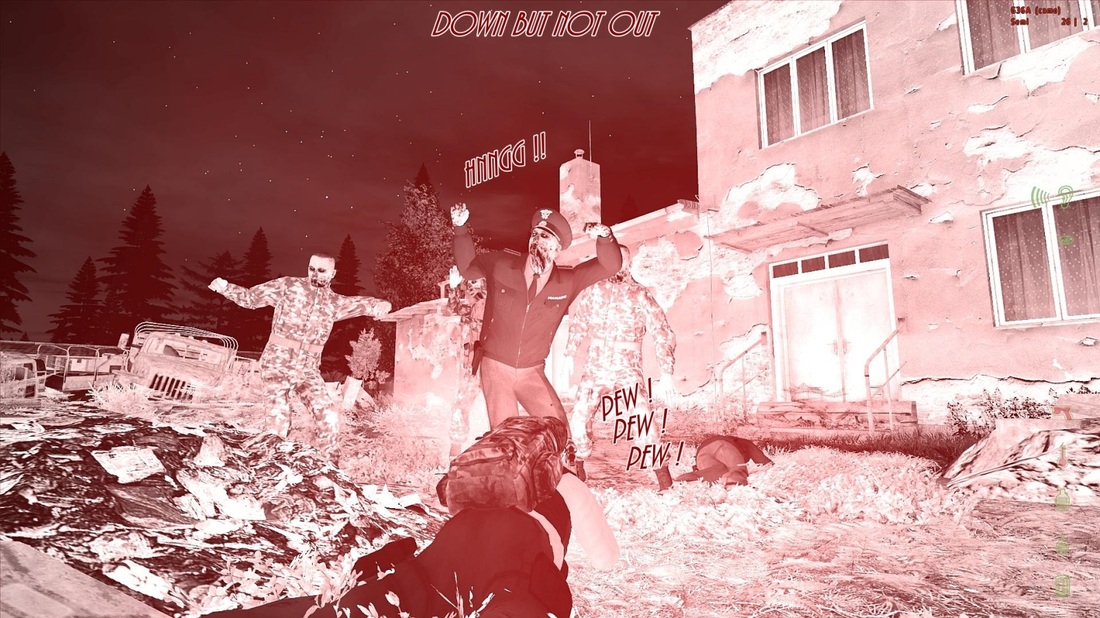 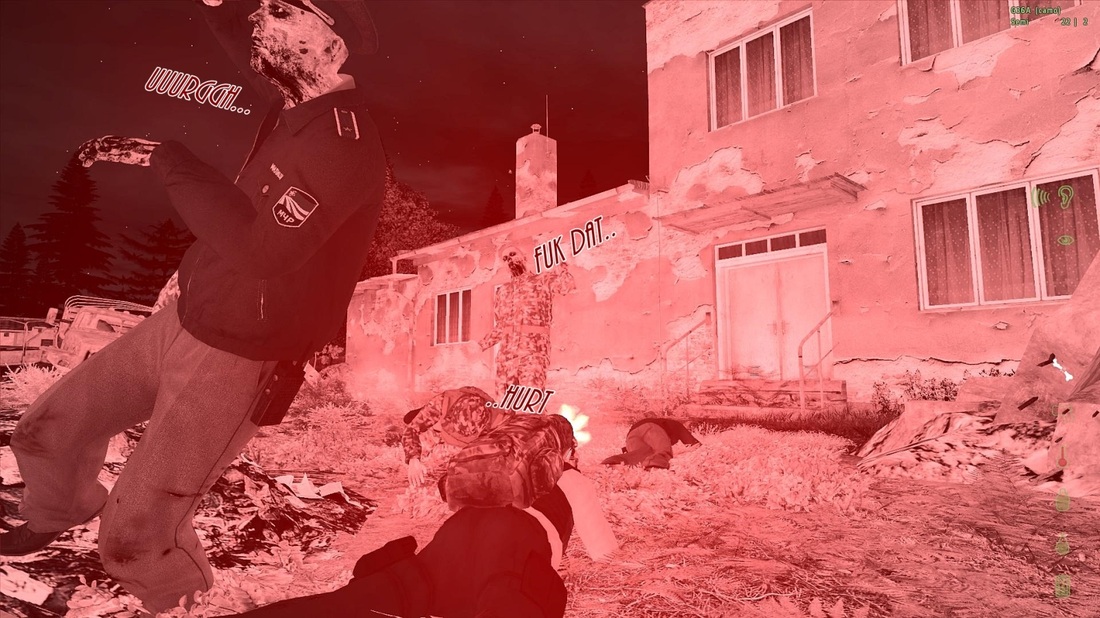 The group was down, i needed to bandage and hit myself with some morphine so i could gather the strength to move my ass into the tower. Out in open i was fucked, plain and simple. Just as i rose to open my pack and smash a morphine some more infected appeared..one looked particularly serious, his eyes seemed tinged with green, maybe i was just freaking out. 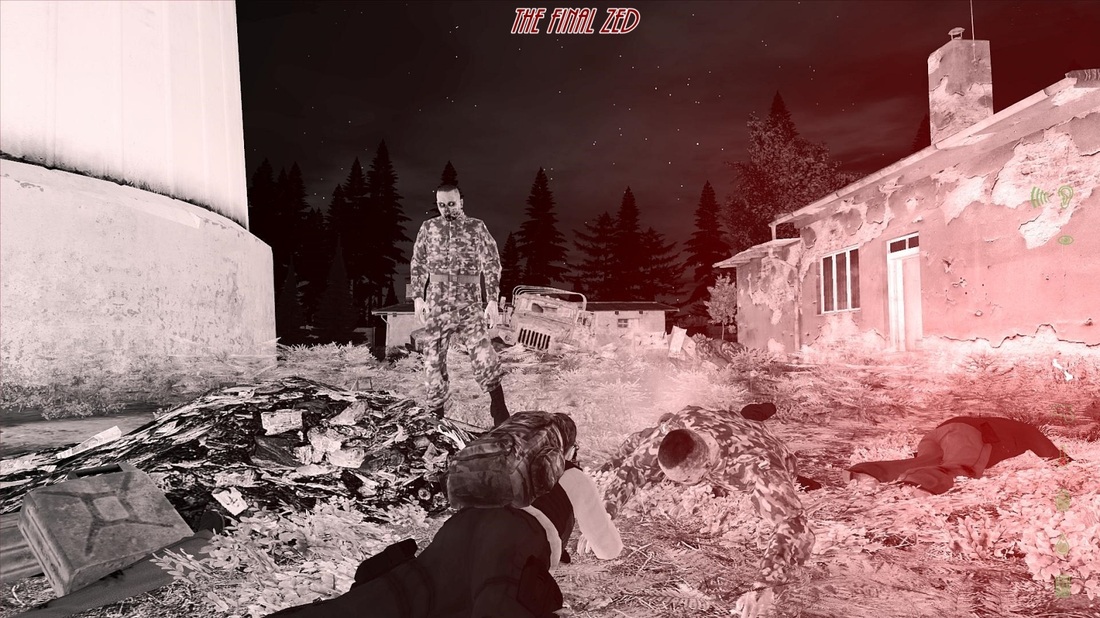 I started to raise my gun to get a bead on him when inexplicably i decided to change out for my G17, idiot ! he struck me a massive blow, knocking me sideways and i started to pass out...noooo..NOOOOOO !!! 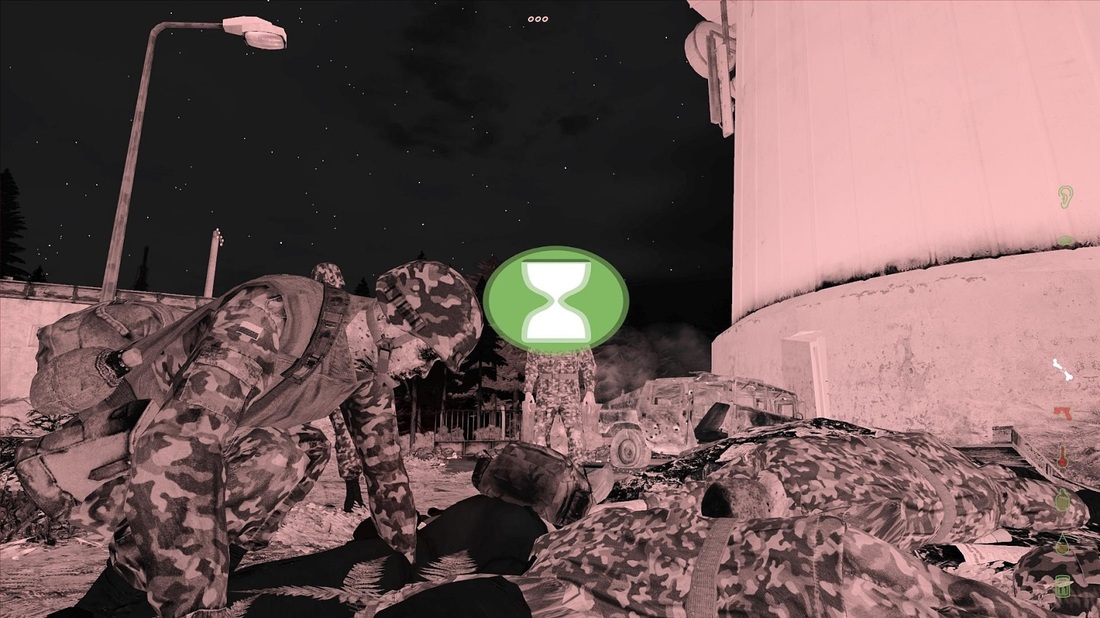 I lay there semi conscious, feeling the infecteds hideous hands on me as he crouched and started ripping at me, my eyes barely open , the world had become black and white, i could feel the life draining out of me.. 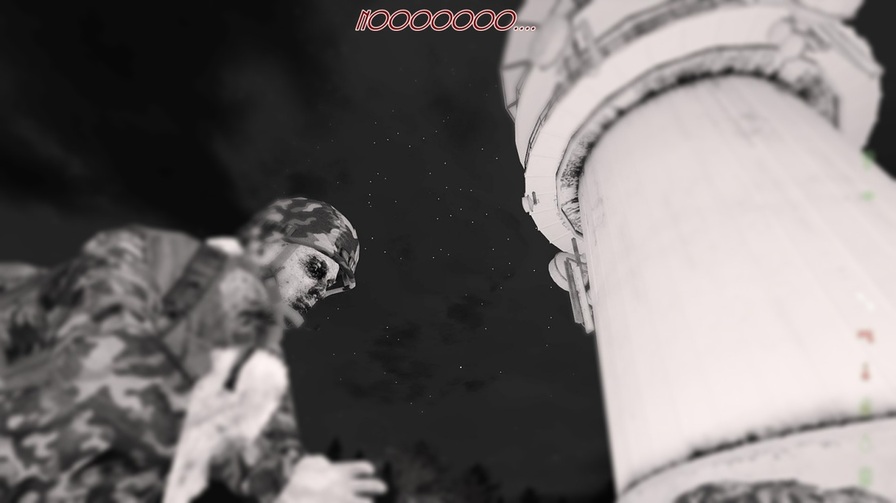 nooooooo...i still had time if only i could get up.. 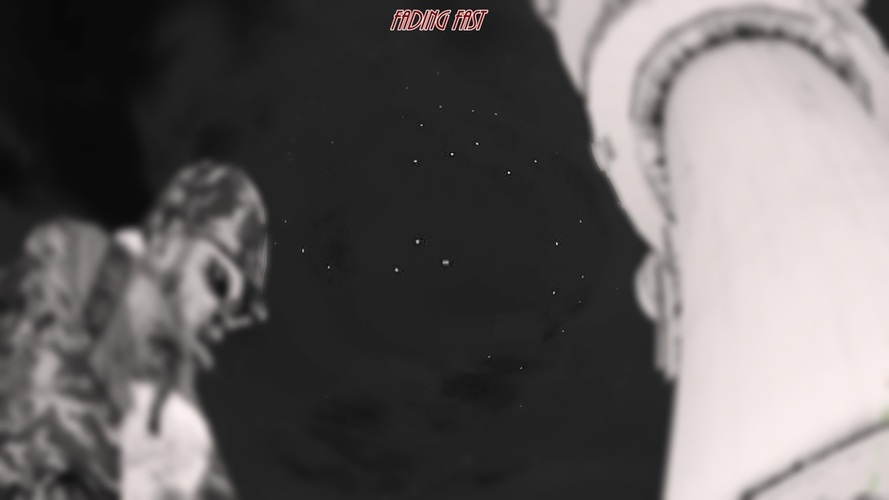 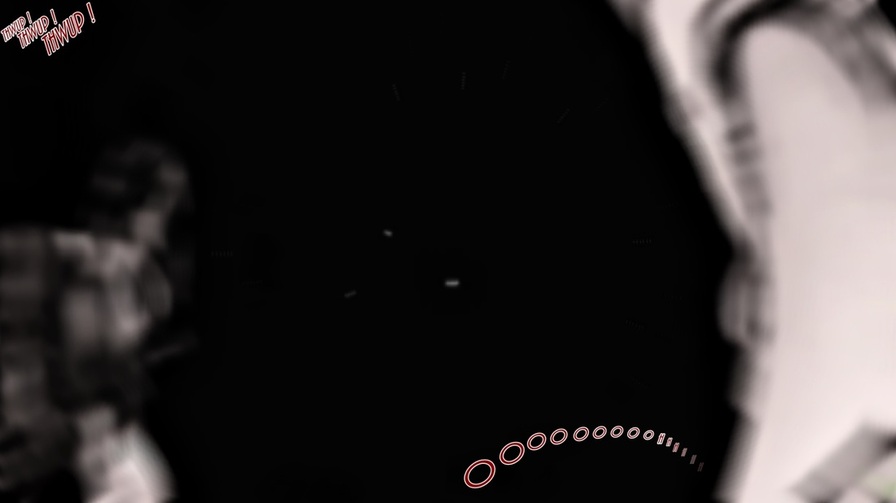