Defeating the dew..an attempt to lift the curse 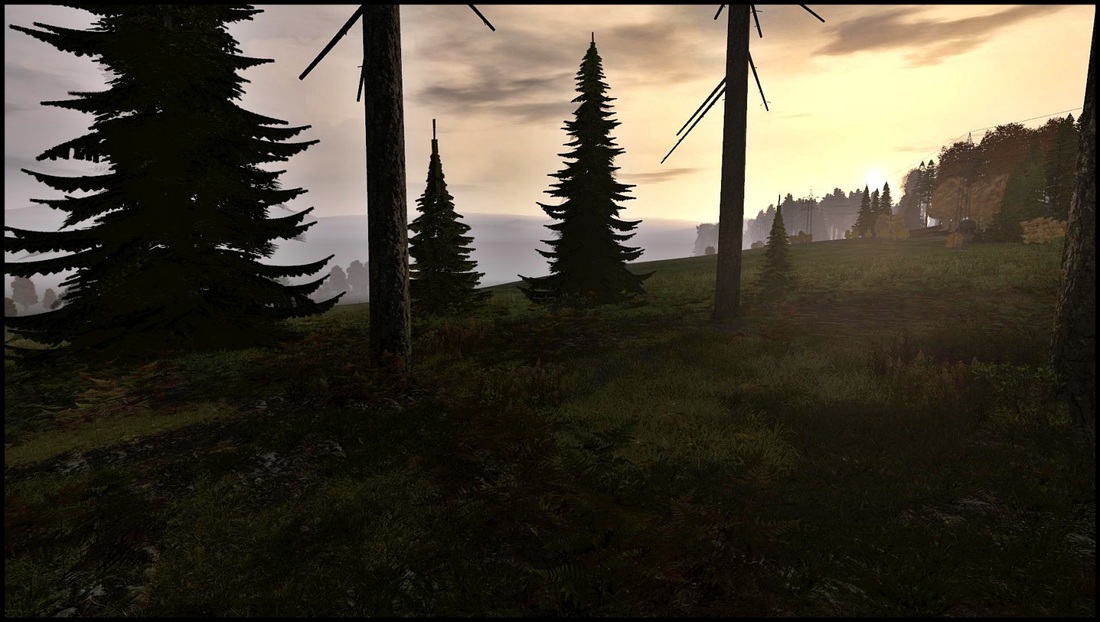 The day starts off lovely, i appreciate a stunning sunrise on my way to Stary, warming my cold bones whilst the the wakening birds are twittering crisply, ushering in the freshness of another apocalyptic dawn.  Life is good, food is aplenty and i have coke, my trusty DMR for long range, an M4A3 cco for closer and a G17 for extreme close range lovin'. I pop into the house on the edge of Stary and realise shit is all set to go down hill.. 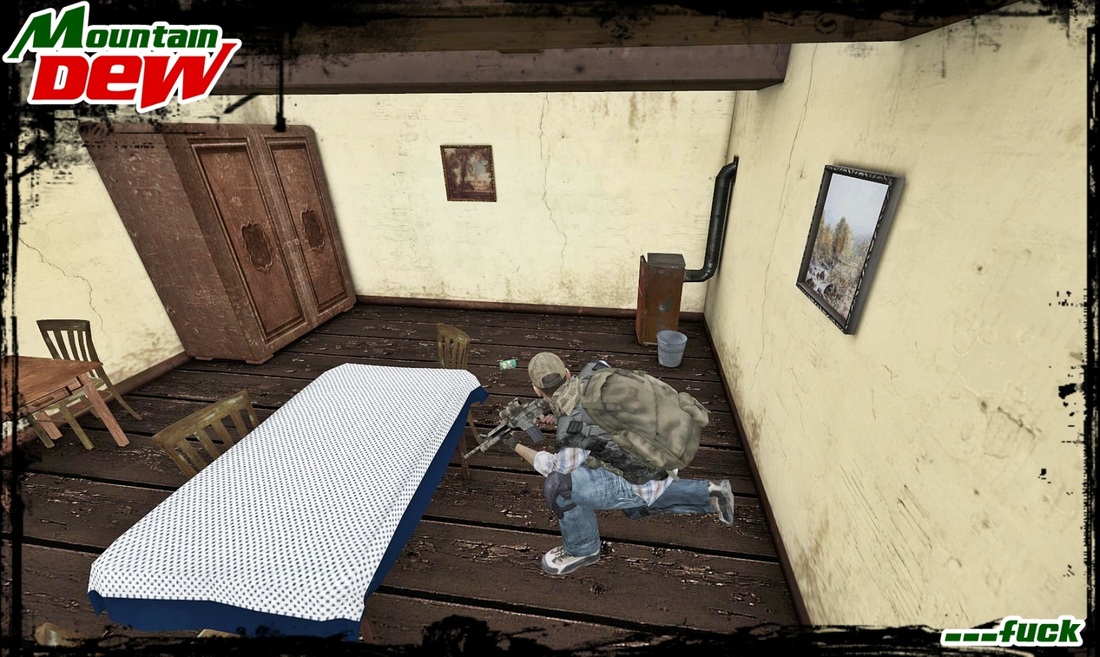 I slide it's terrible unearthly metallicness into my pack and decide not to risk the tents, i will take it back to base camp and stash it, too many memories of bad runs with The Dew in my pack. Two minutes out of Stary and i spy smoke in the distance, heli wreck, up with the scope ..two guys just coming in and starting to loot it, one goes prone crawling around and one crouches near the tail. I am not worried, they are about 500 metres away, one has a winnie and one an akm. I watch them and have seen there is no hardcore weaponry there so leave them be. One of them looks my way, i am beside a rock in a field, but i see him pop out his 'nocs while his mate runs into the treeline beside , i am spotted.  I do the QE and start to slowly move sideways.

The akm barks off and bullets crack around me , then a couple hit me , bleeding, you idiots, what the hell are you doing ?!?! I bring up the dmr but before i can squeeze of a round i am felled with a broken bone. Hairy balls in my mouth! This dude with the akm knows his business, i start to bandage as i am bleeding out pretty quickly, shots pinging around me..knockout timer up, i slump into a retarded position on the ground. Up again, finish bandaging, scoff down my two bits of bacon and suddenly the dude with the winnie is on me pumping away from about twenty metres, one hits me and he takes five rounds to the face from my dmr, i suck down a morphine as he hits the dirt. Rebandage as i watch the akm guy who has busted cover and is coming at me, i can barely make him out at the edge of a white fog, shaking and panic breathing. I pump some rounds to make him zig zag and leg it in the opposite direction on zero blood.

Five minutes ago i was as happy as Larry, fresh and colourful and enjoying the morning, now i am shaking, passing out every minute or so and running for my life across a black and white world. I turn and put some more ragged shots towards the akm guy who keeps on me, he turns and runs for cover, i sprint and run down a hill and into the safety of a gully and some trees, have a quick nap then up again. My legs don't stop pumping until i am near Zeleno, my narcolepsy is a recurring problem. 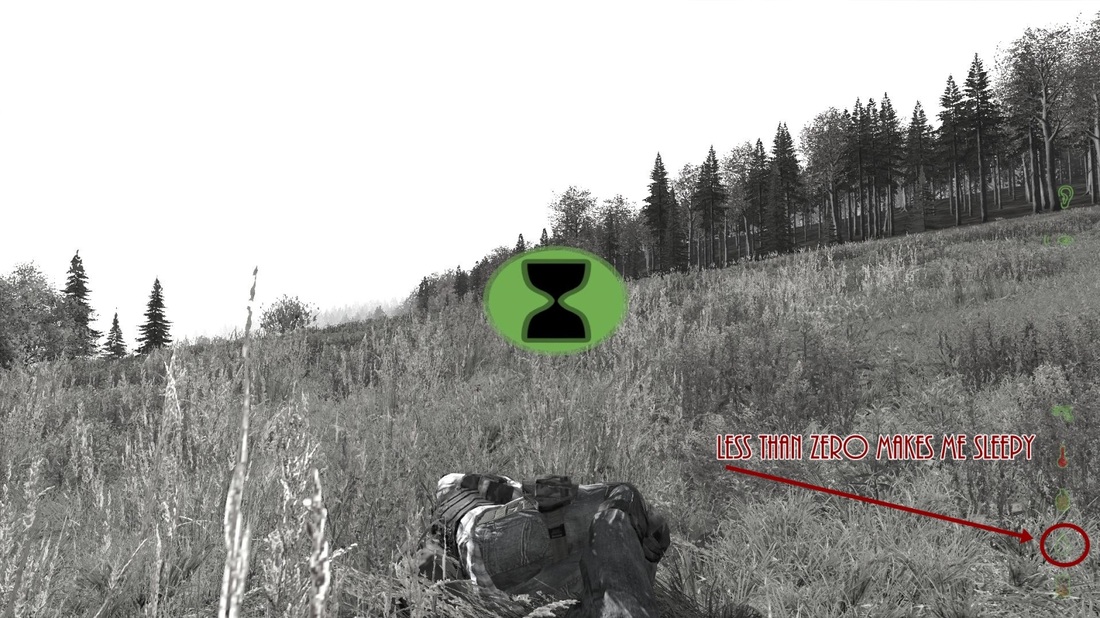 Here i find a goat on the hill and after several more naps i finally manage to get a smidgen of colour back. 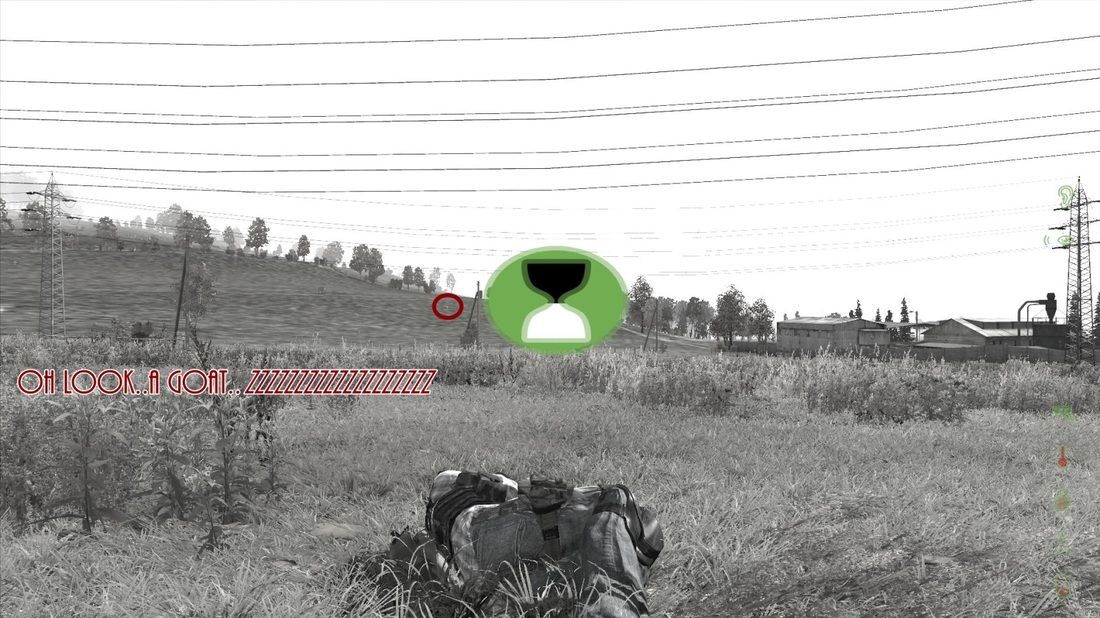 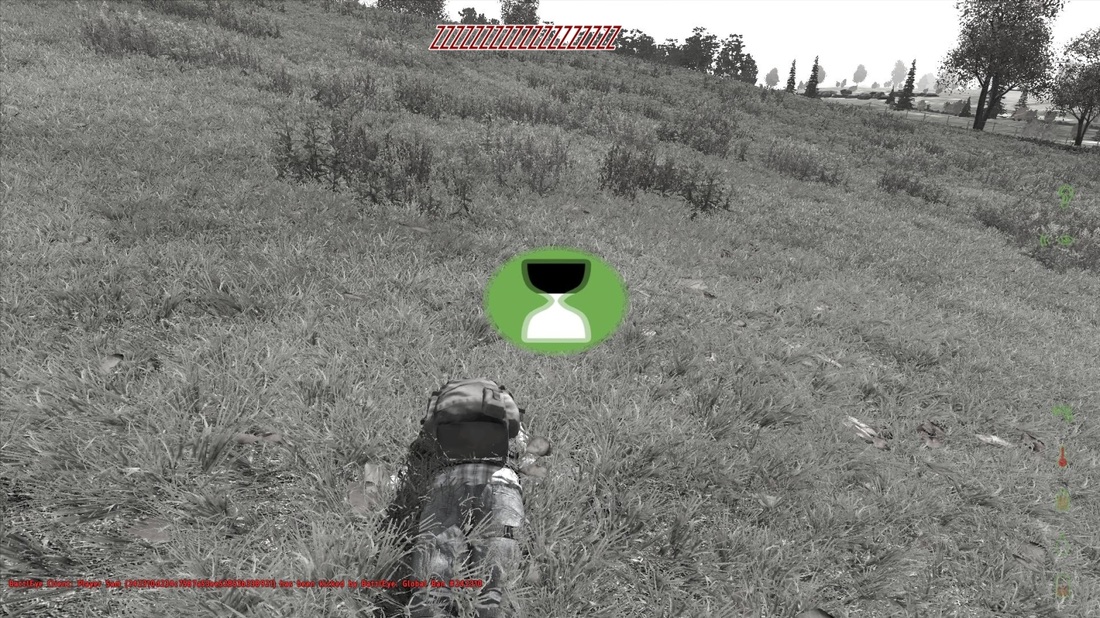 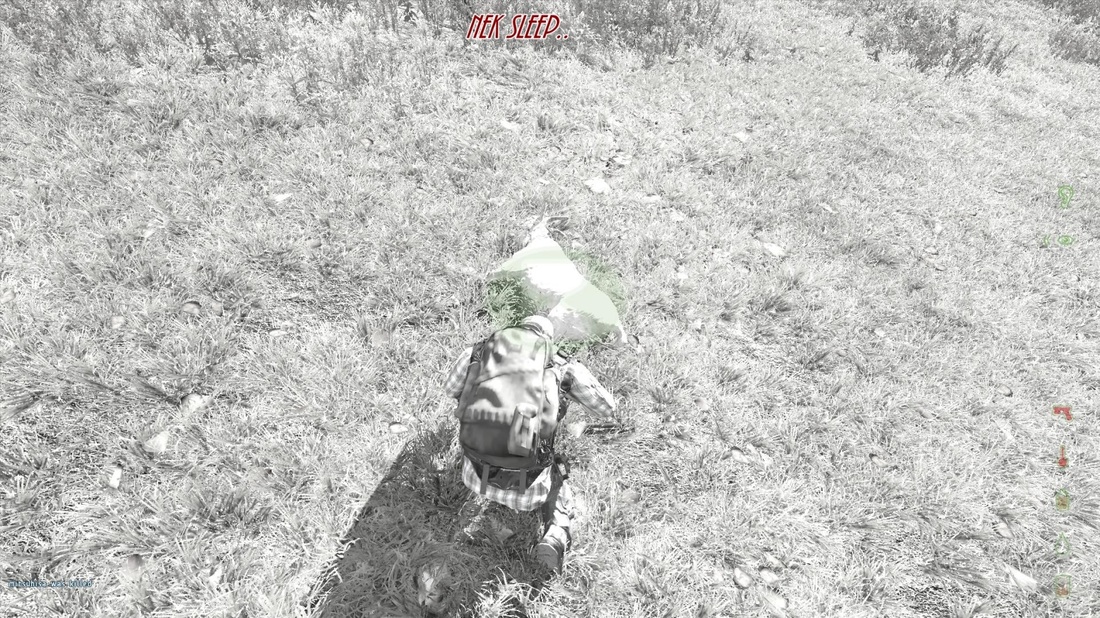 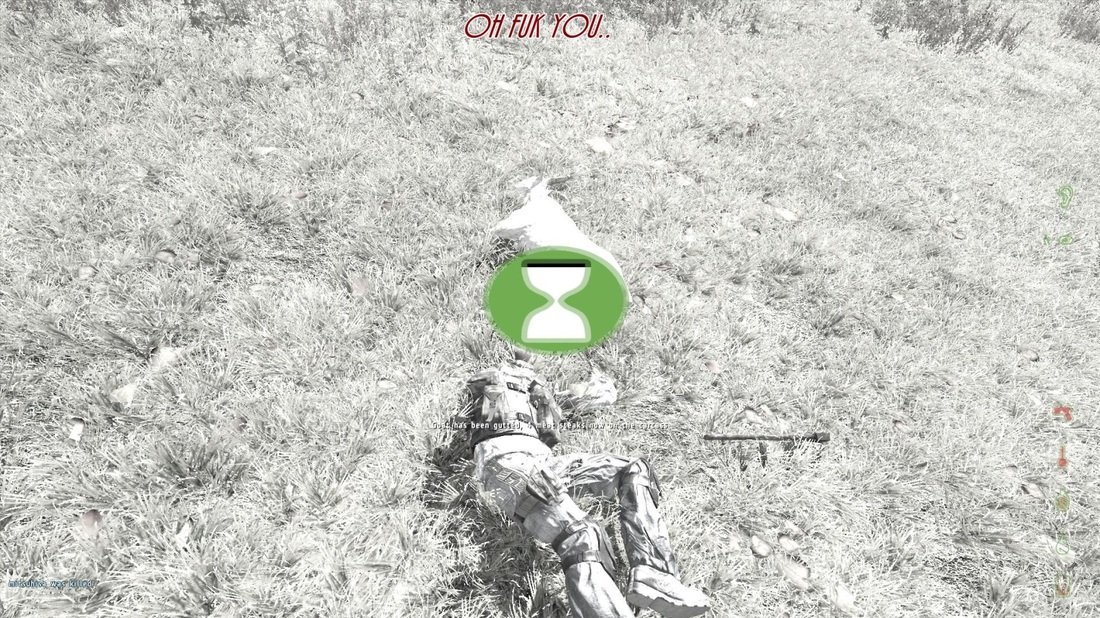 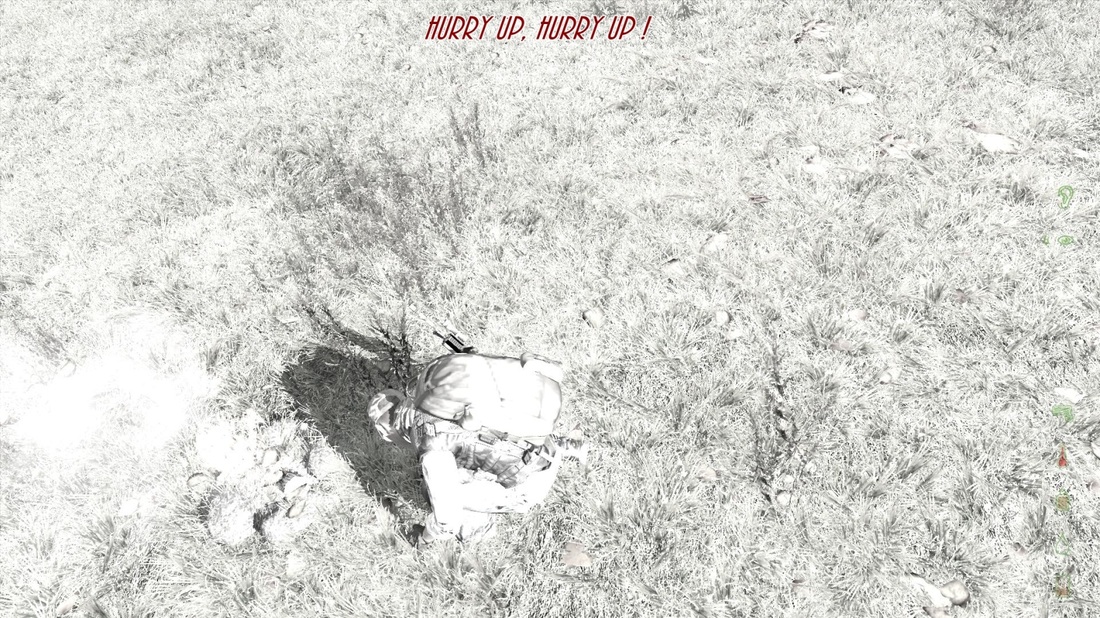 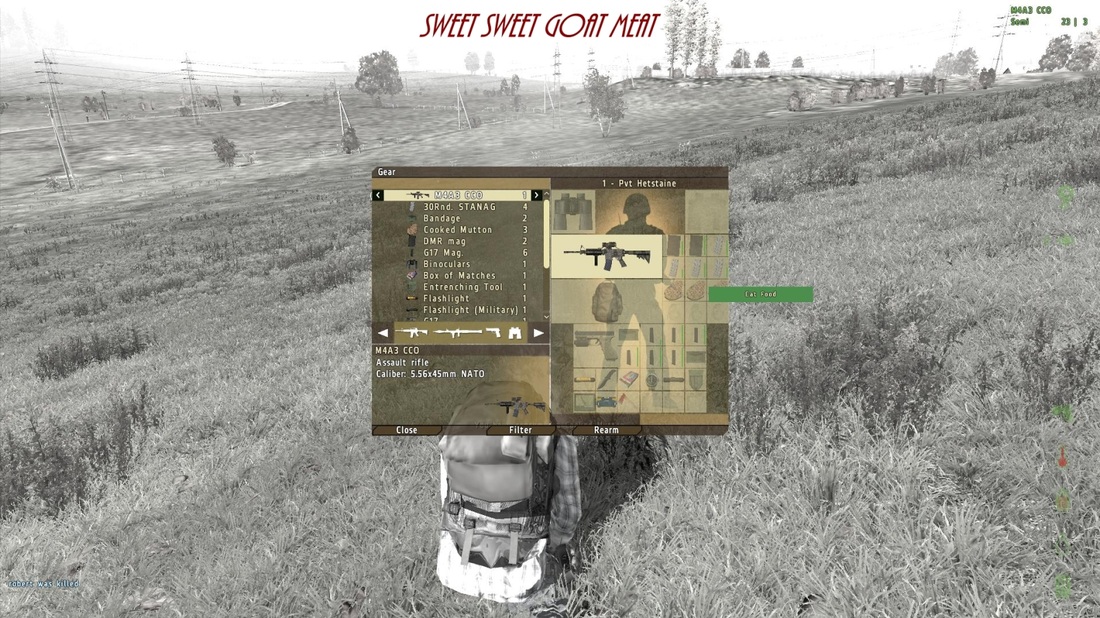 Server restart is within the next thirty minutes so i decide to leg it to a heli spawn near Komerovo, then go cow hunting. Not a beast on the way to eat, even on the side of the hill between Kamenka/Komerovo where i have carved many a juicy fillet. Waiting on the hill near the lighthouse i see a suicider at the bottom near the steps and decide to check him out, see if he has any painkillers to get rid of my shakes...his sole possession is a flashlight, he has been raped of his bandages and painkillers. The apocalypse is a harsh tough world, and nothing is sacred. So while i am kicking back with this dead guy a bandit runs from around the front of the lighthouse and says hi.. 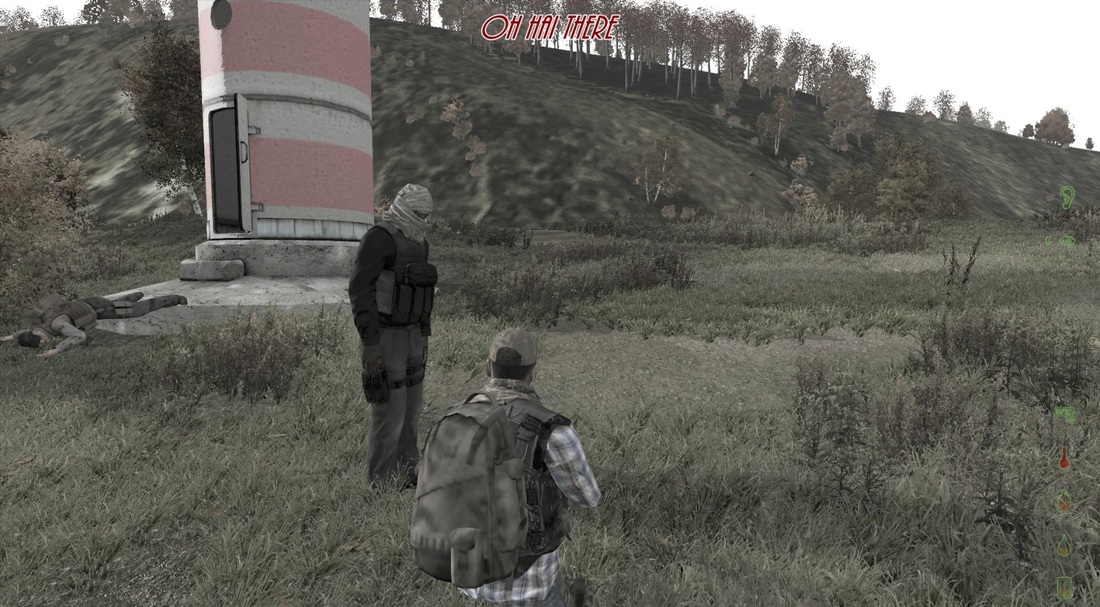 I am like..hey..sup bandido, as i watch my m4 appear in his hands from my pack.I think, fuk it, take me now Dew Lord...and we look at each other for a few seconds. No gunfire breaks the staring silence and we become relaxed and chat it up, swap stories, he slides my gun back into my pack saying sorry , he is used to being shot instantly. I find out he doesn't know the international survivor handshake so i explain to him the qe deal and we talk about the Dew curse which he also knows nothing of. I explain to him the horror of The Dew and then tell him i have one on me...he laughs..my mouth does not even contain the hint of a smile. Things go weird and silent. I decide he is the Dew curse personified and is here to send me to Solnichniy beach via a shot to the skull or a leg glitching stare, just as i am about to pull a shaky trigger finger on this Dew demon from beyond he says, hey..can i hang with you until the chopper respawns ? The voices leave my head and i say sure, love to have you aboard. He says he wants to pick up a mate near Elektro and see if they can take out the sniper. I give him my M4 and we wait. Of course server restart comes up and we cannot log due to proximity. 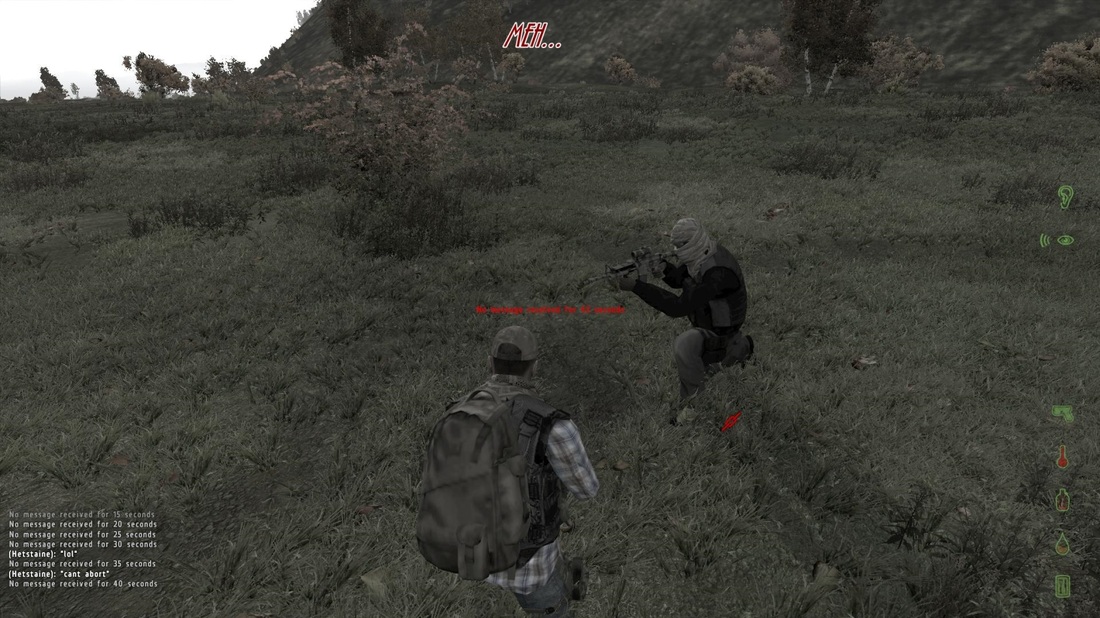 So restart, lose my skin because i murbered my attempted murderer (qq) but the heli is there..i ask him if he can fly by saying ' do you know which way is up ?' he answers ' George Washington ' , i am convinced he is the man for the job and lax back in the gunner seat. We heli off to pick his mate and then get some blood for me before we begin the hunt. His eyes, once again start the Dew demon voices. I smack my head on the dash and clear my head. 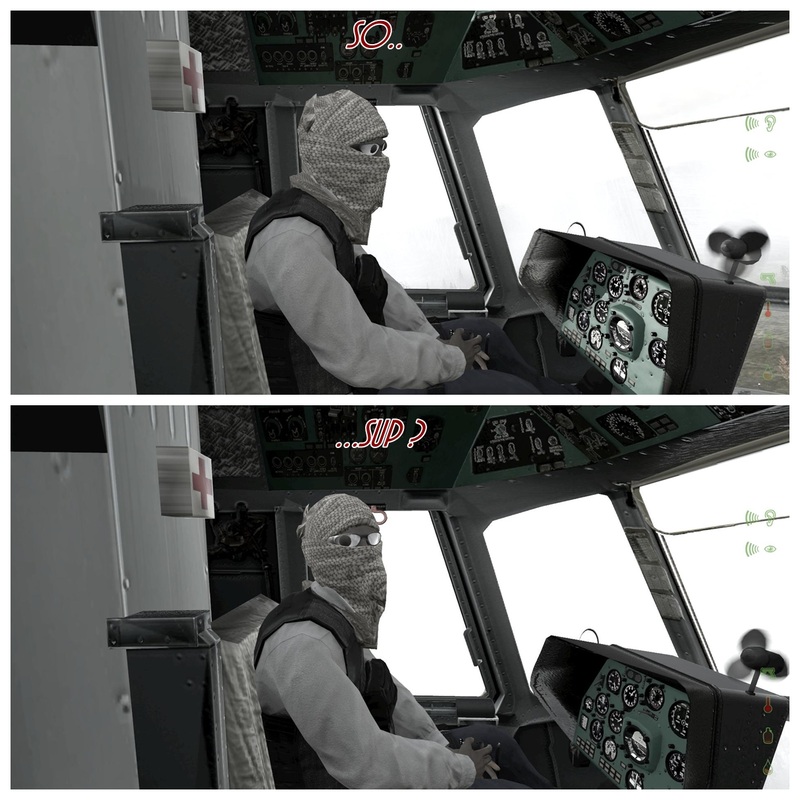 We find his mate also airborne near Elektro in a Mil8 so we head to Skalisty first to check the other chopper spawn, which is also there, we have three choppers but decide to all bail into one and come back after i am blooded up and have hopefully nailed the sniper. I tell them to hover over the hospital, i will grab the blood pronto and then gtfo before sniper death. He ends up hovering on the outskirts so i think fuck it, who dares wins and bail out. 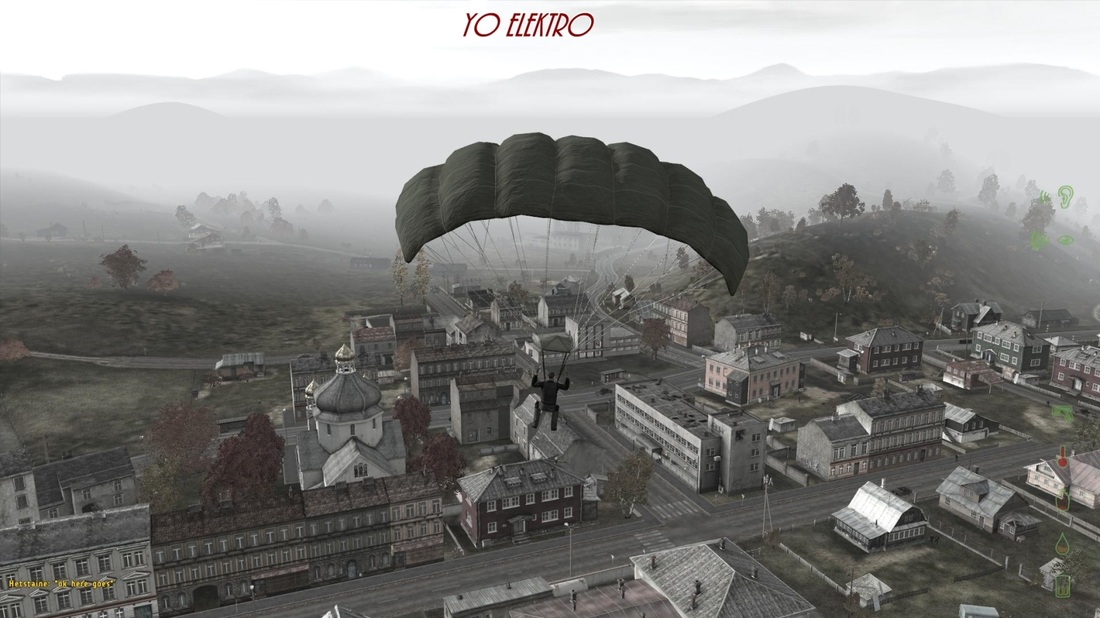 Immediately on landing i am greeted by an Elektro citizen 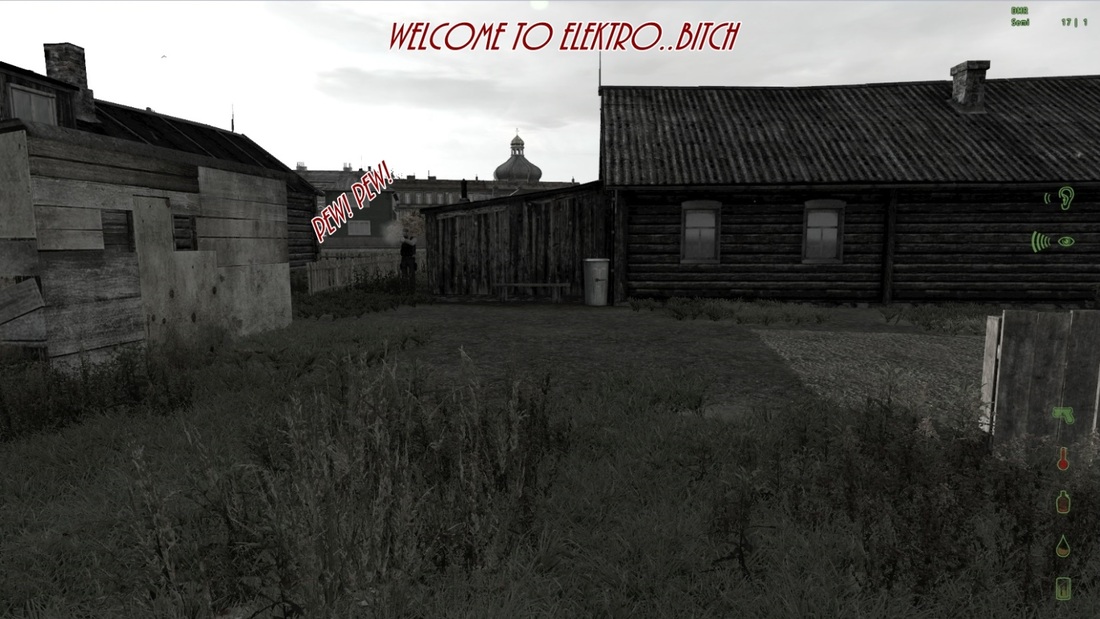 Shot and bleeding again i skurry around some houses and start to bandage but no joy, old mate wants to give me the keys to the city.. 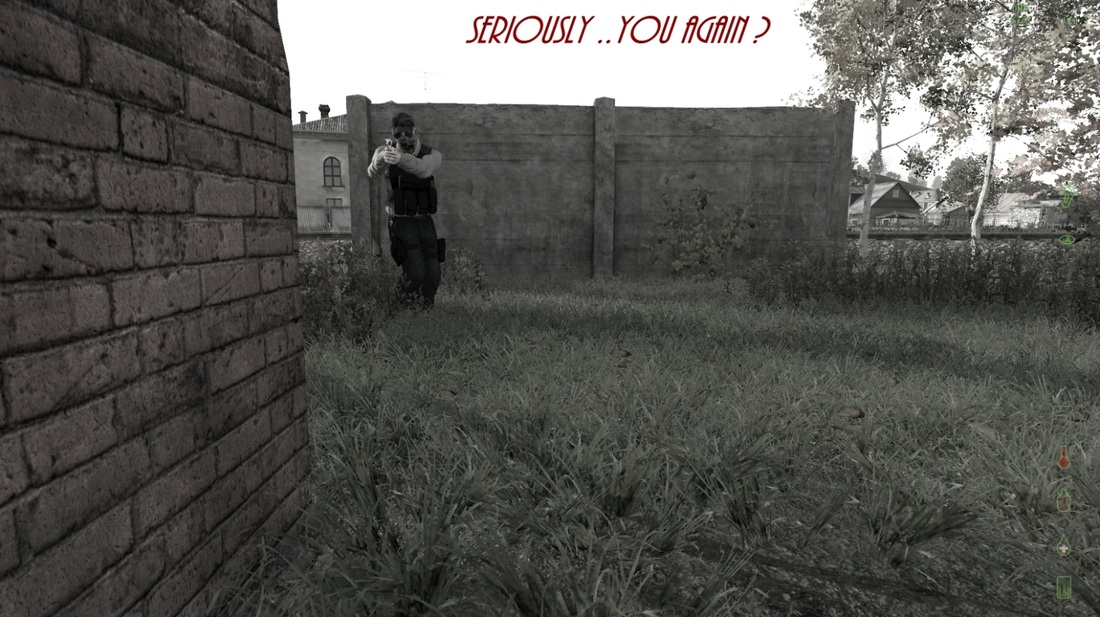 I don't want them... so he takes one to knee for the cause 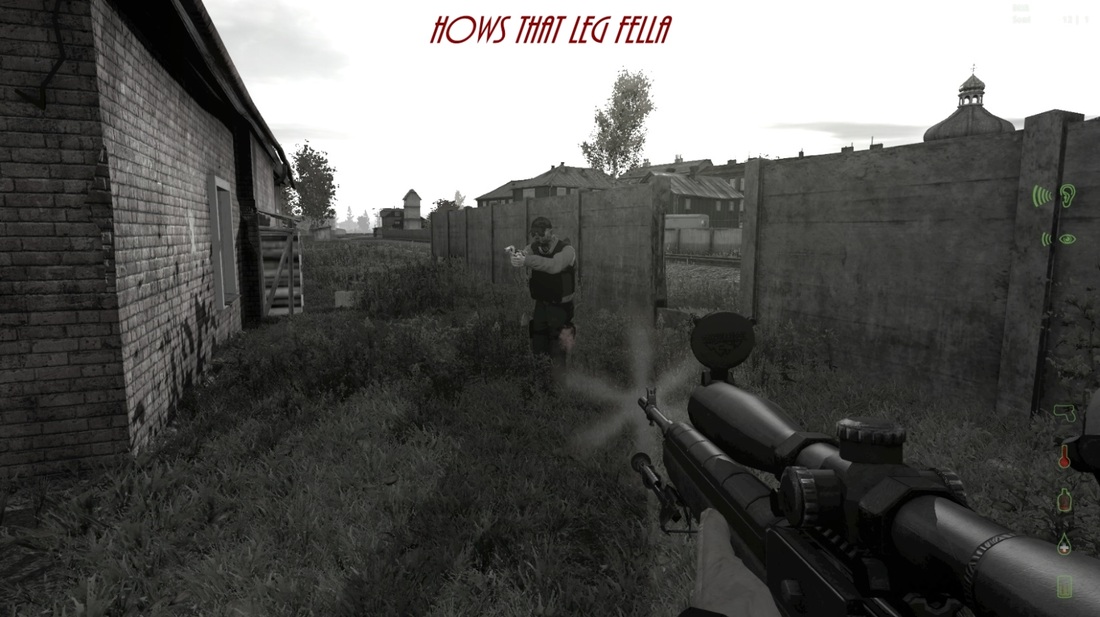 I run to bandage , once again on zero blood..but still no joy. Jaime Hyneman wants to test the myth that one can survive indefinitely without blood 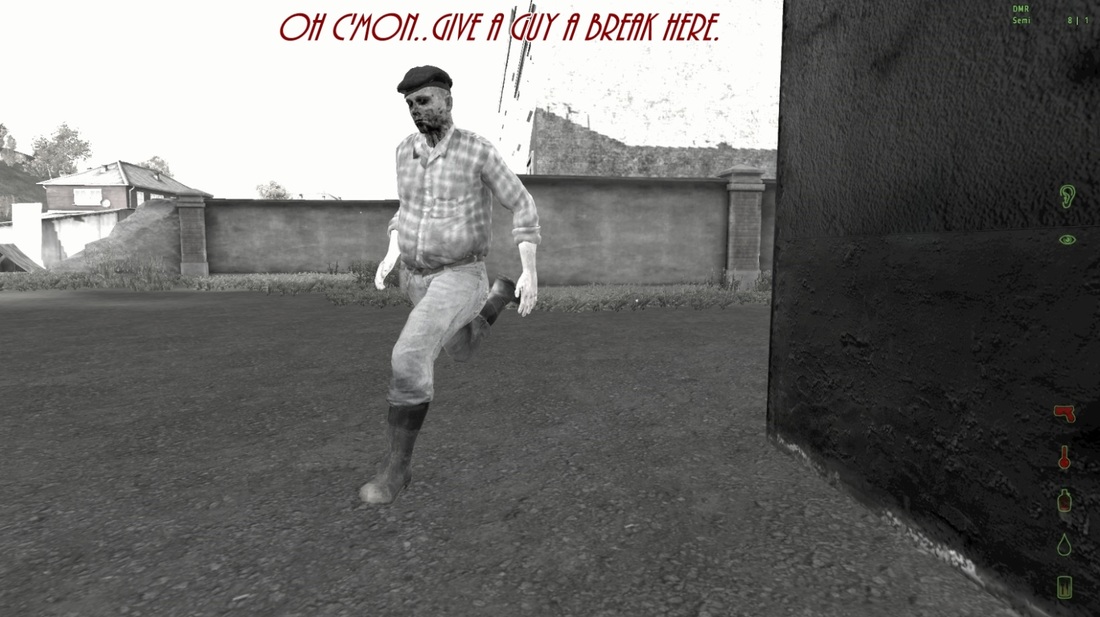 Finally i get to bandage in one of the buildings opposite the office block and then get into the hospital, grab some blood and seriously think about dumping that Dew in one of the medical boxes, but i just can't part with it. 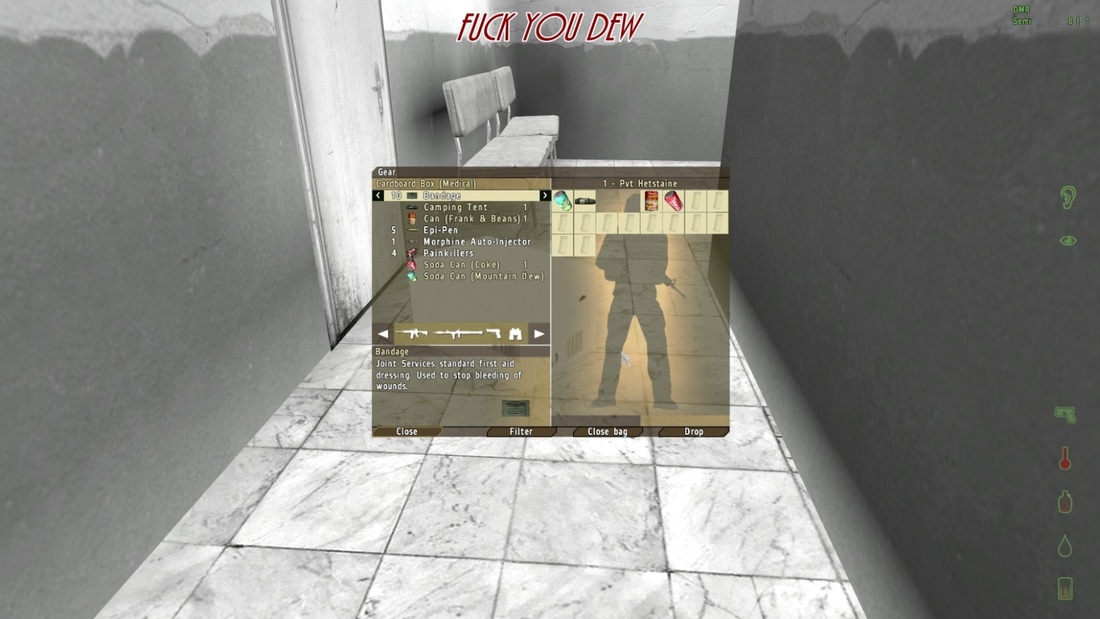 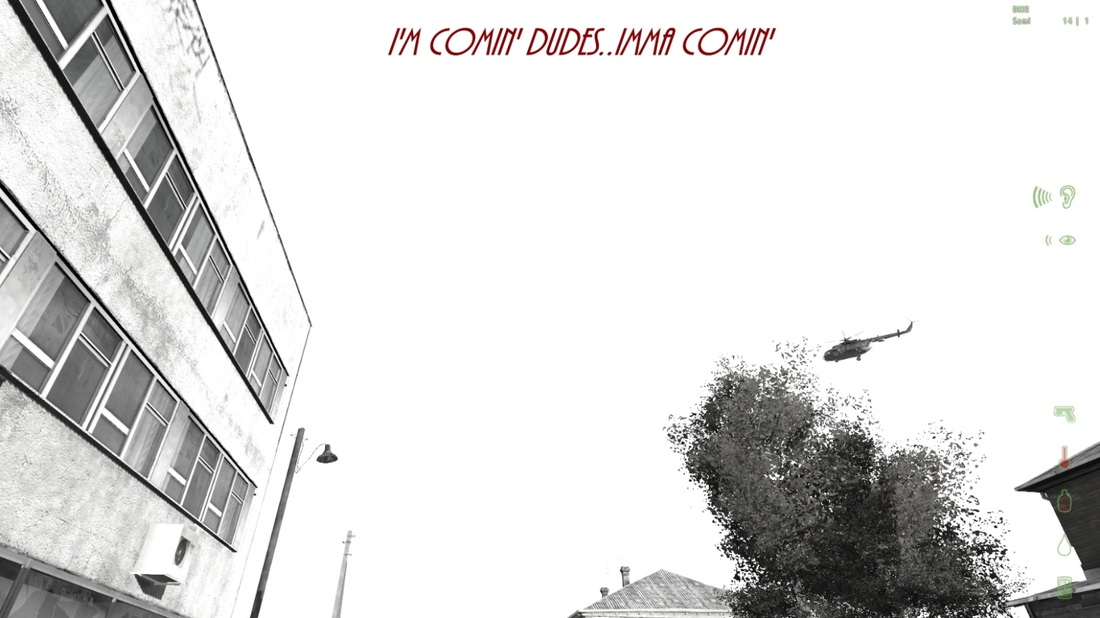 As always in desperate life or death situations, i am overcome by a mad urge to just have a comfy little nap 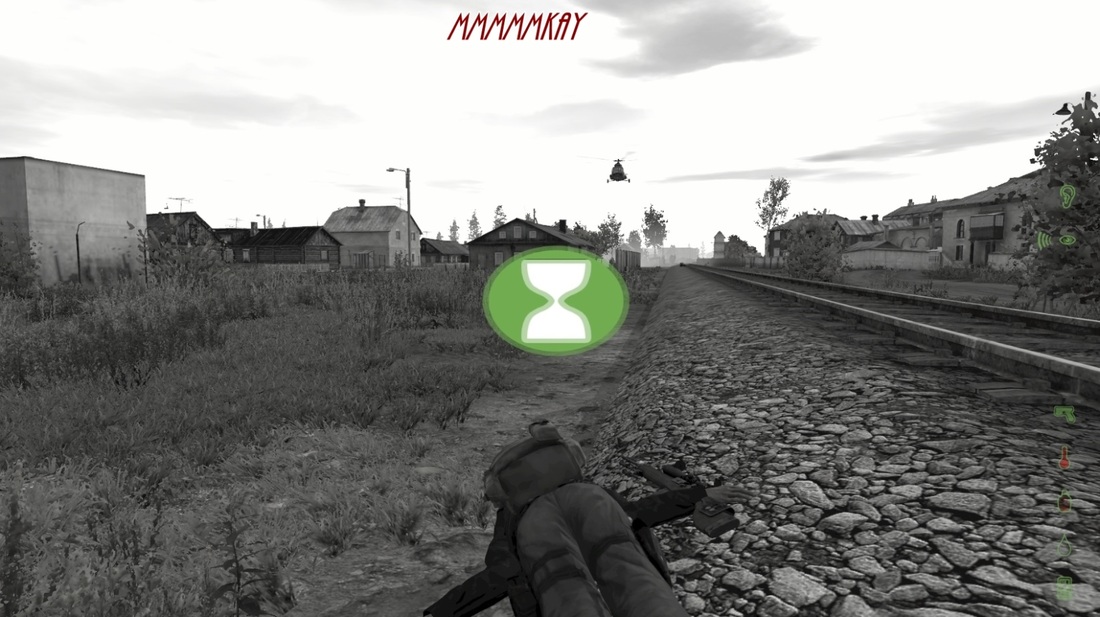 The chopper comes to my rescue and bandido dude bails with my M4, mowing down a bunch of zeds like Ron Jeremey gone run amok in a cathouse, i awake refreshed from my beauty nap and get into the chopper... 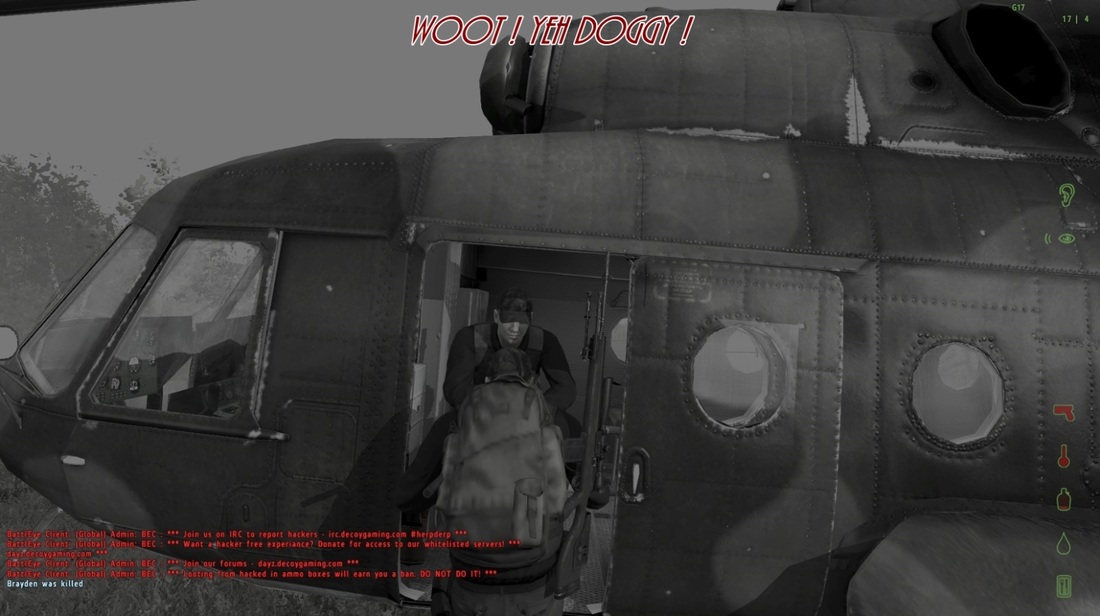 ...Annnnnnnd then i'm out again 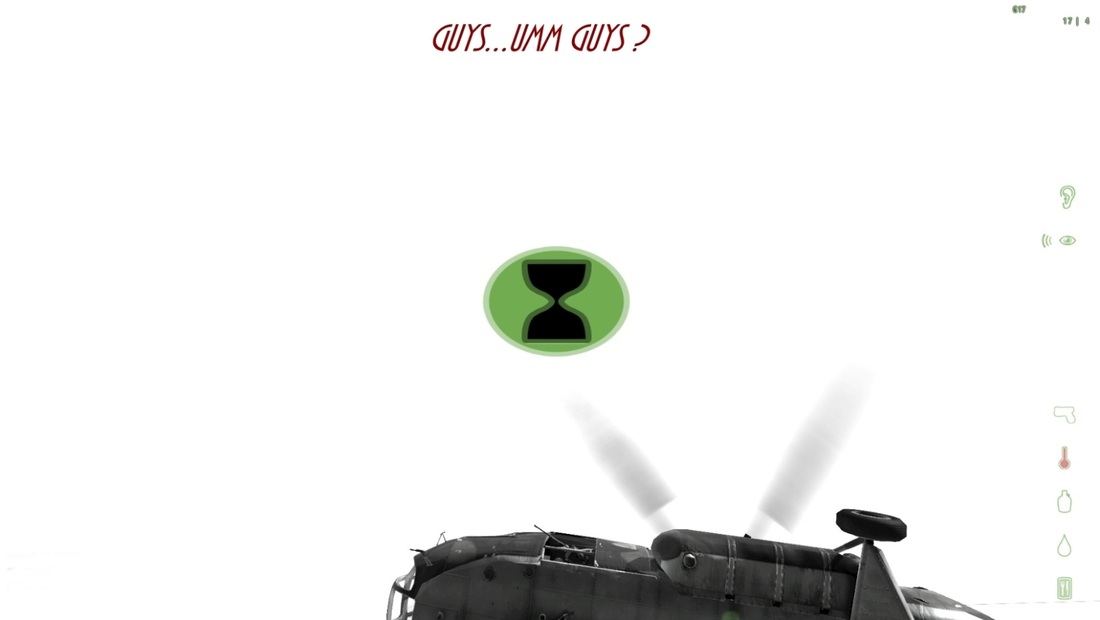 waking up now more refreshed than Lindsay after a sleep under a nightclub table i proceed to protect my Dew.. 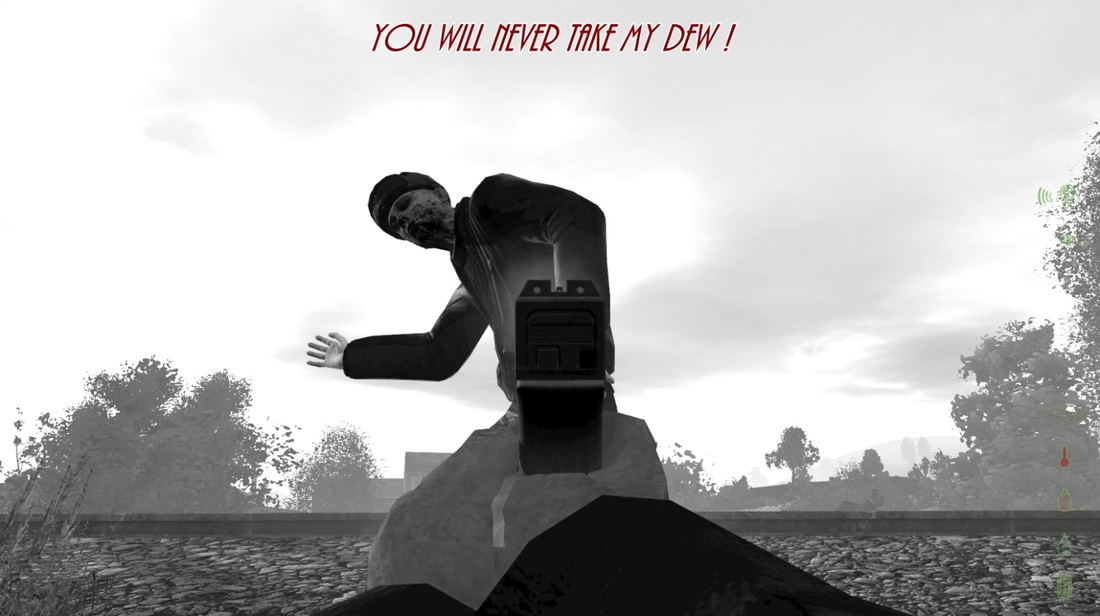 After somehow managing to survive a zed onslaught at the base of da choppa i up and running as the heli situation is going pearshaped... 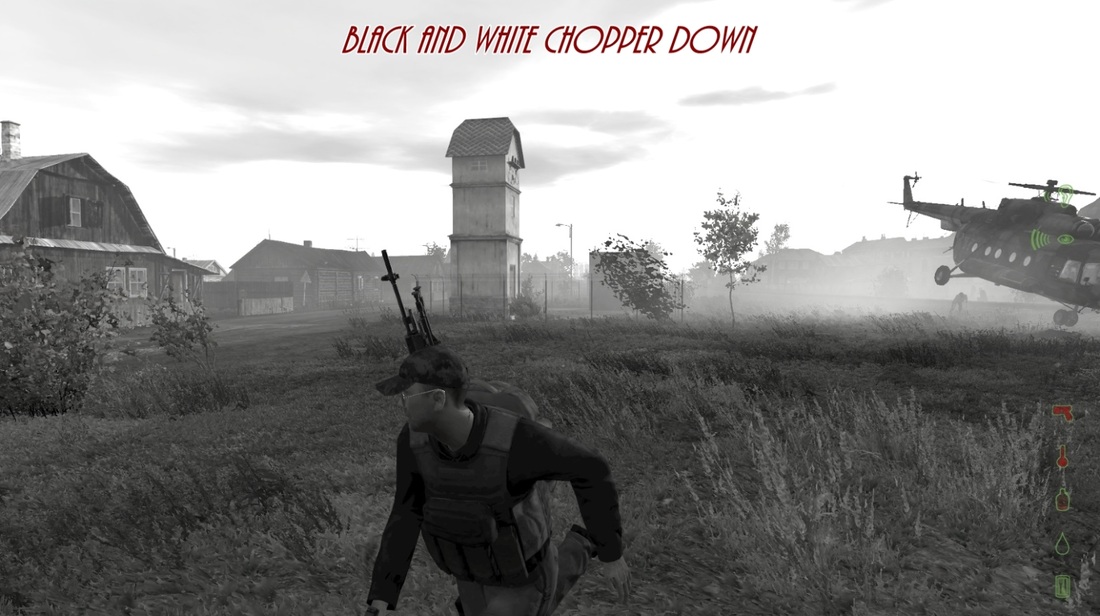 I hear the chopper spool down as it slams into the ground and keep running away from the zeds, over direct shit is all over the shop , both of the other guys are bleeding and running after me, then bandido's mate is down, i turn and me and bandido jeremy are popping the zeds but his mate is down for good and turned into party favours. 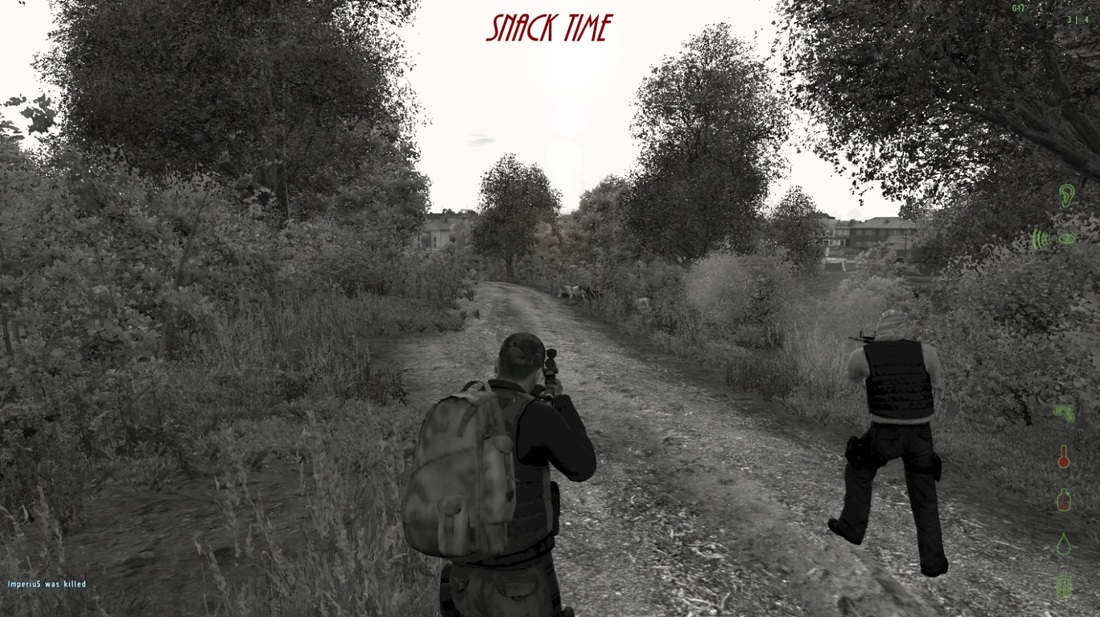 Bandido bandages himself and we blood each other but of course my blood doesn't take and i am still fucked up in black and white pass out world. Its like a typical friday night out. We bolt along the coast and score a set of wheels near the industrial area, i jump in and pass out like a bitch on the passenger seat while old cartoon eyes drives us away to refind his mate. This is when i realise i am also coughing and have no antibiotics. Bandido gives me a stern look and tells me to get my shit together 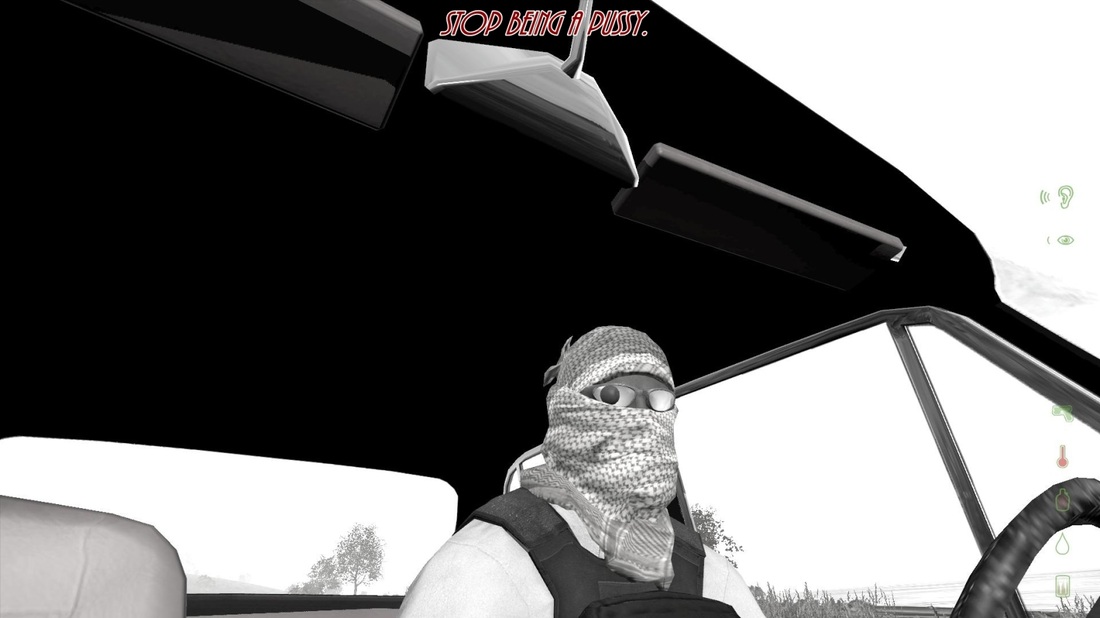 I am finally blooded near Cap Golova, that feeling when the world pumps back into full life around you after so long, it has been a good hour in black and white land and constantly riding zero blood, just need some ab's and i am back.

His mate ends up being near Elektro so we turn around and hightail it back to the action but bandido puts the car into the fence at the firestation poppin' a tyre so we bail out hooking up inside with his mate. I decide to call it quits and part with a quick qe then head for the hills to log, dew and life still intact. 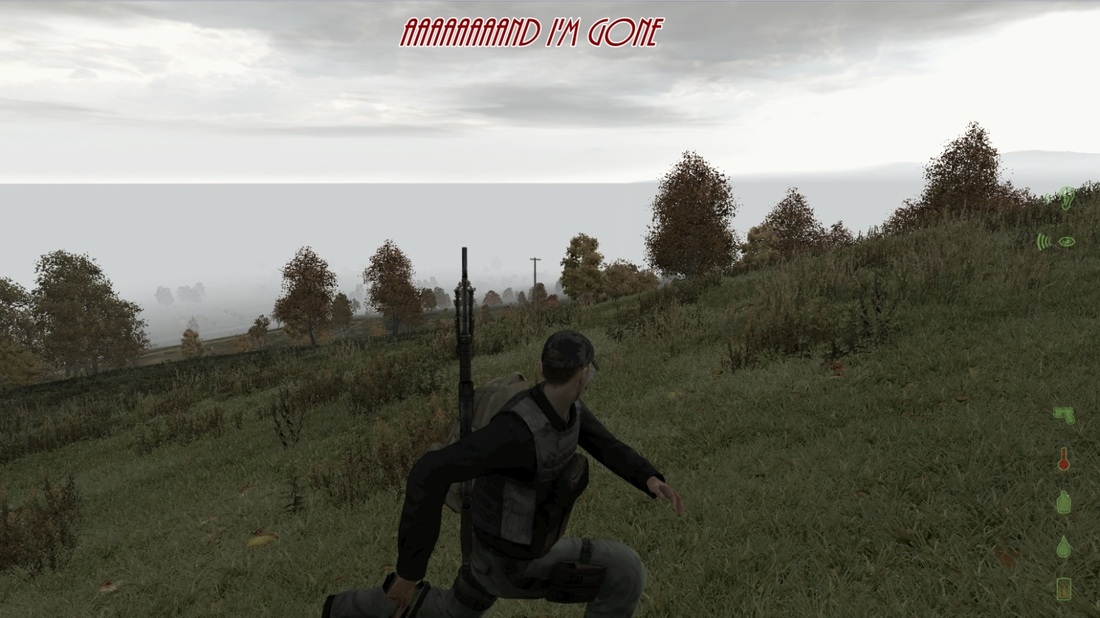 The Dew has been defeated in its unending mission to kill me...this time...but for how long can this madness continue ?