a pvp type server where side chat is king and he is the throne sitter... ' i had 38 murders !' ' i am silent and deadly !' ' all you will hear is the bark of my gun !' Dribble dribble dribble. I decided i would attempt to take his bragging down a peg and became a camping whore.  I grabbed a bicycle from outside of Cherno on a fresh spawn and pedalled to Balota in search of a weapon of pain. An mp5a5 in the hangars with one mag and a czech pack. At the top of the stairs in the tower is a hatchet dude looting a guy , i pop him in the head and score an akpso with mags and a G17 plus some assorted goodies. Gunned up i place my bicycle near the edge of the hangars and retreat back under a tree to wait.. 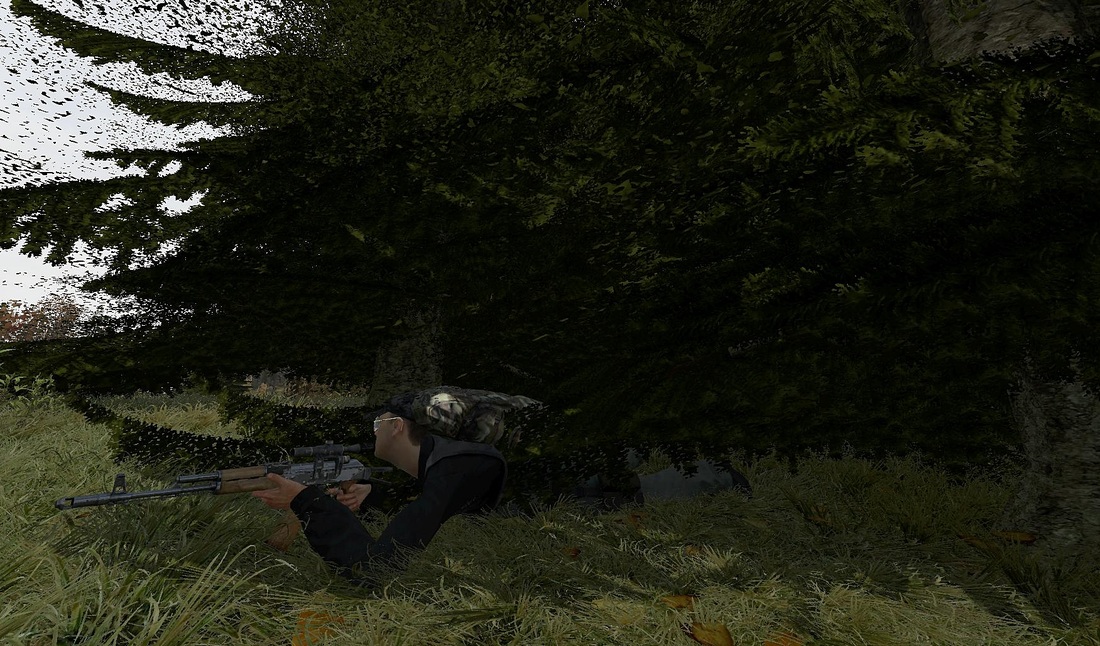 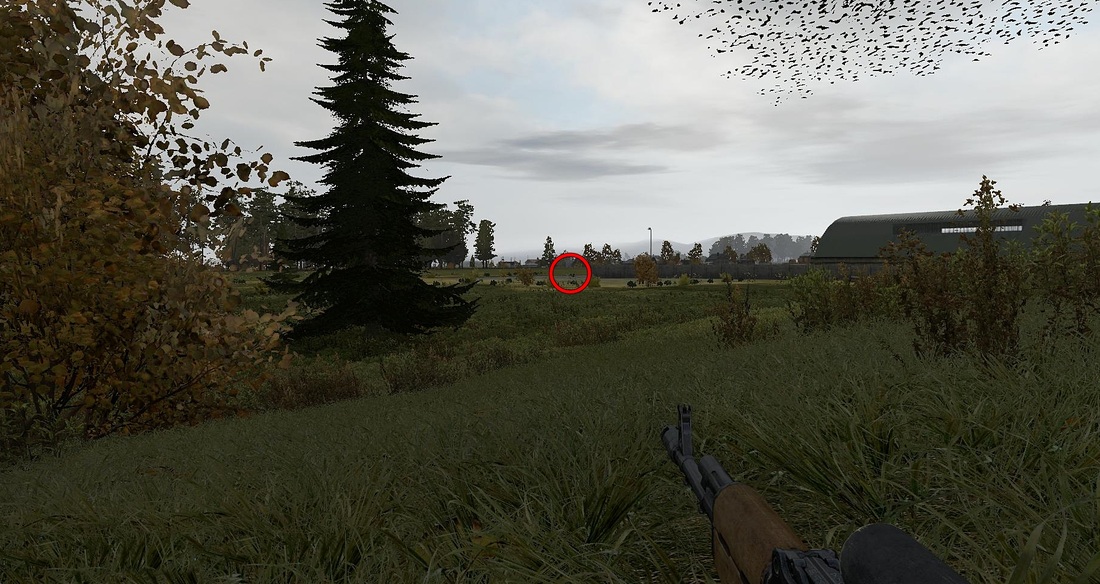 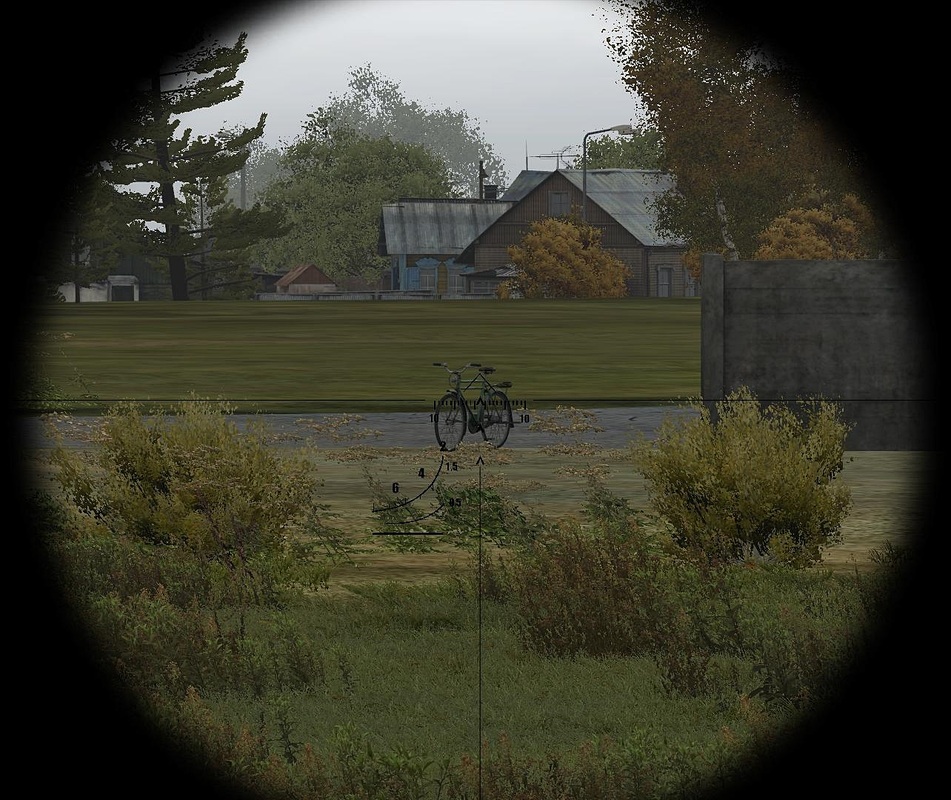 A couple of freshies run past and i loose a few shots in their general direction to keep them moving and away from the wheels. Cries of ' I'm unarmed don't shoot !!' ..feck off. Then a Bandit flashes across my scope..could this be him ? Odds are low, full server, a survivor moves into screen locked in mortal combat swinging a crowbar like a home run batter, the bandit brandishing an M16.. 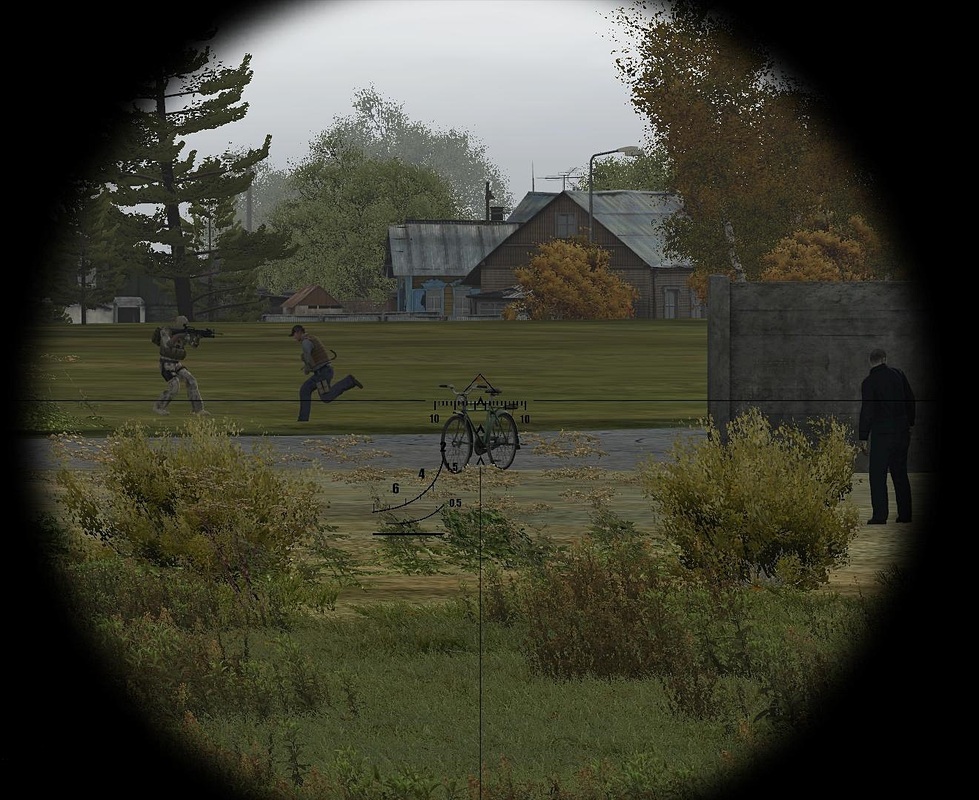 The survivor is hit and starts spewing blood like the exorcist, i get a shot in the bandits gut and amidst some zeds he starts to bandage , the survivor goes in swinging , the bandit pops and drops him, i ping the bandit in the head. 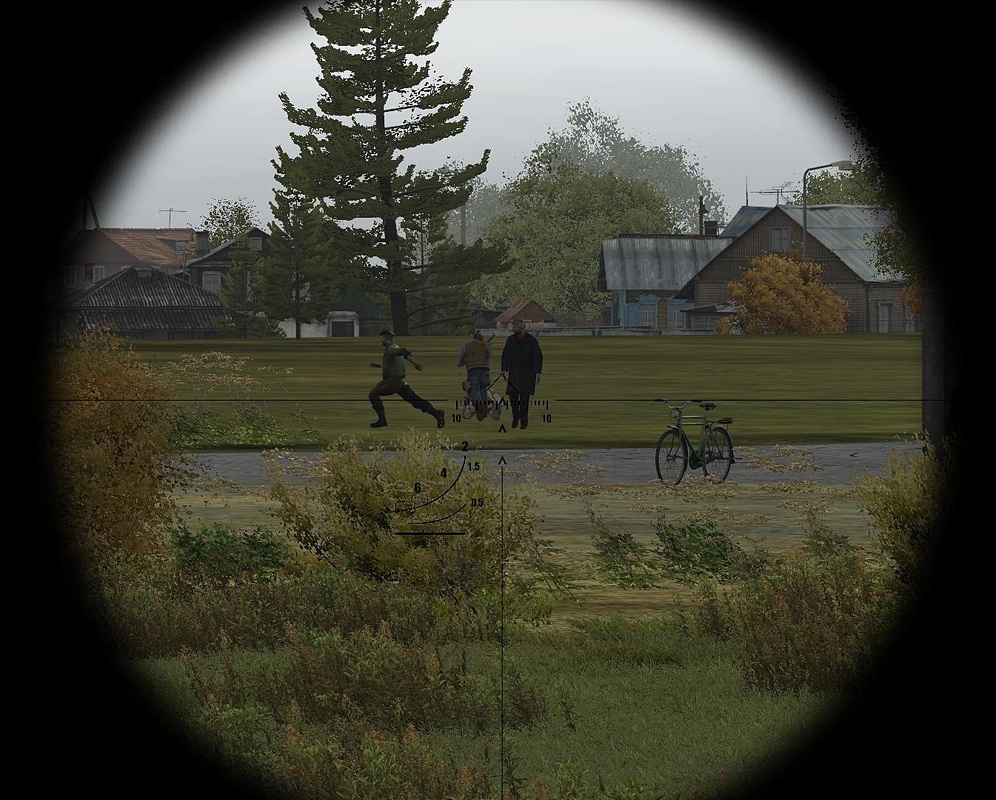 A quick check of the bandit and it is none other than McBandit, what are the odds. I stifle a girlish scream of joy and take his m16, stanags and toolbox then run back to my tree..

Ten minutes pass and of course McBandit is back to check his body... 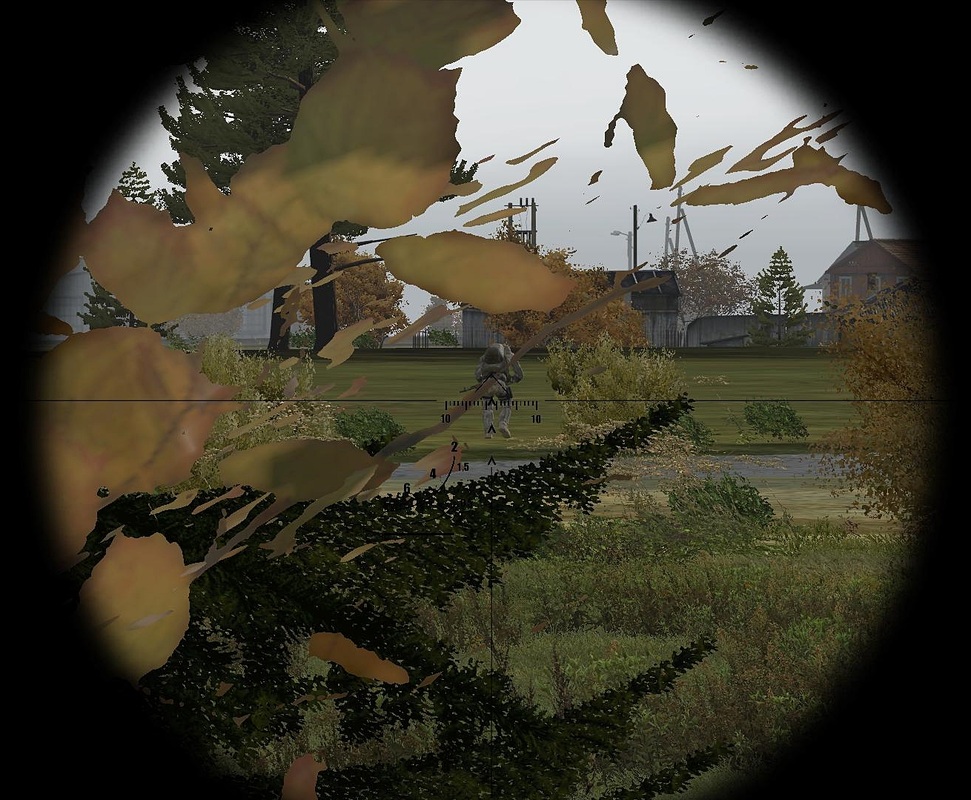 I wait for him to go through the actions and then fire a single shot, i hit but he is up and running..'tis but a scratch.. 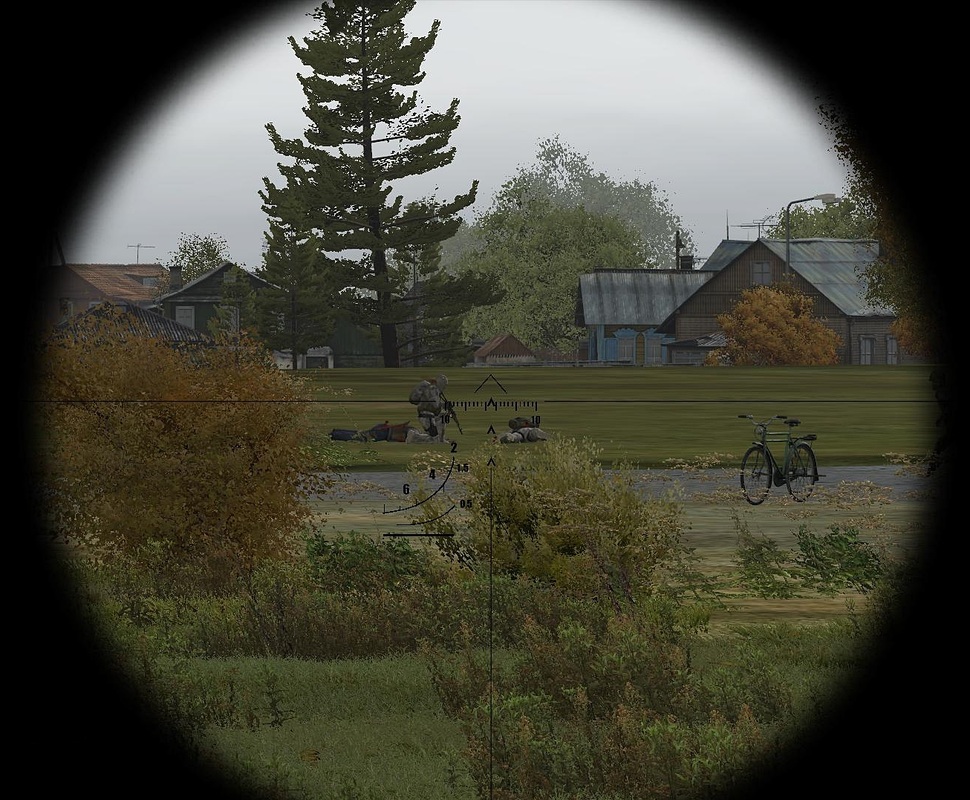 I open up missing grandly and he bolts behind the wall for cover, i leg it into the forest and take position behind a a big juicy thick trunk, wait a minute to make sure he isn't coming then head for the open area on the hill between Cherno and Balota. Just as i exit the treeline i see this.. 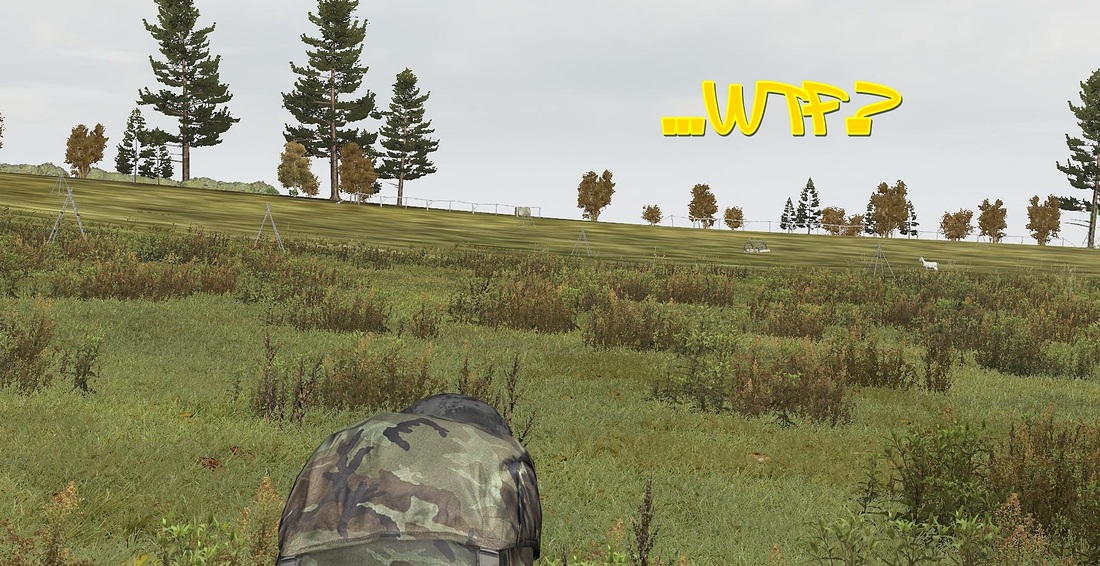 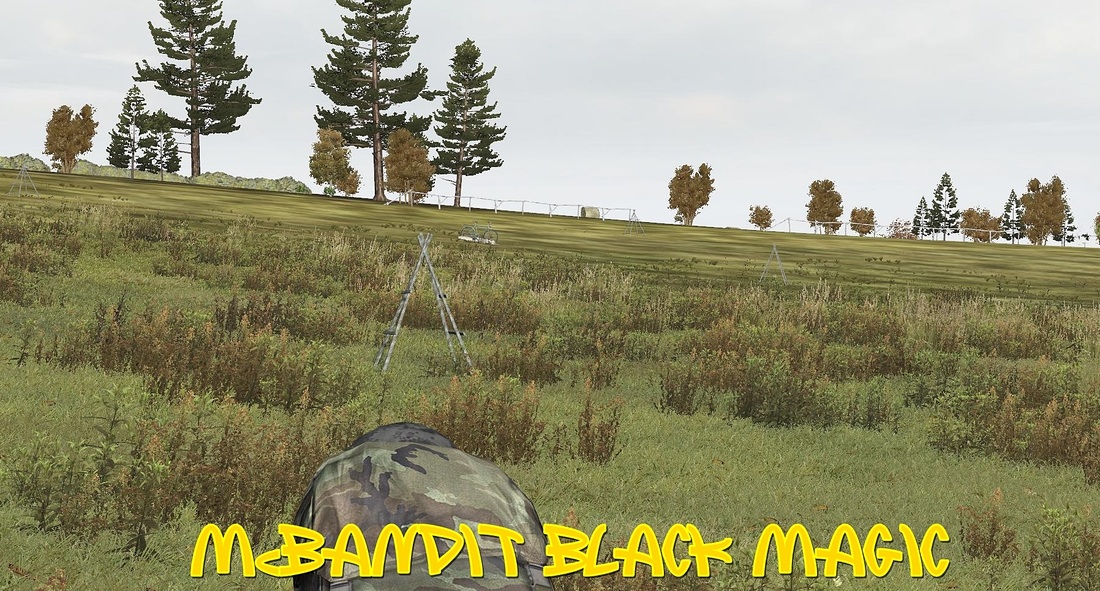 Chances are it is McBandit on my bicycle..after sweeping the grass with his face for about thirty seconds he alights and i light him up.. 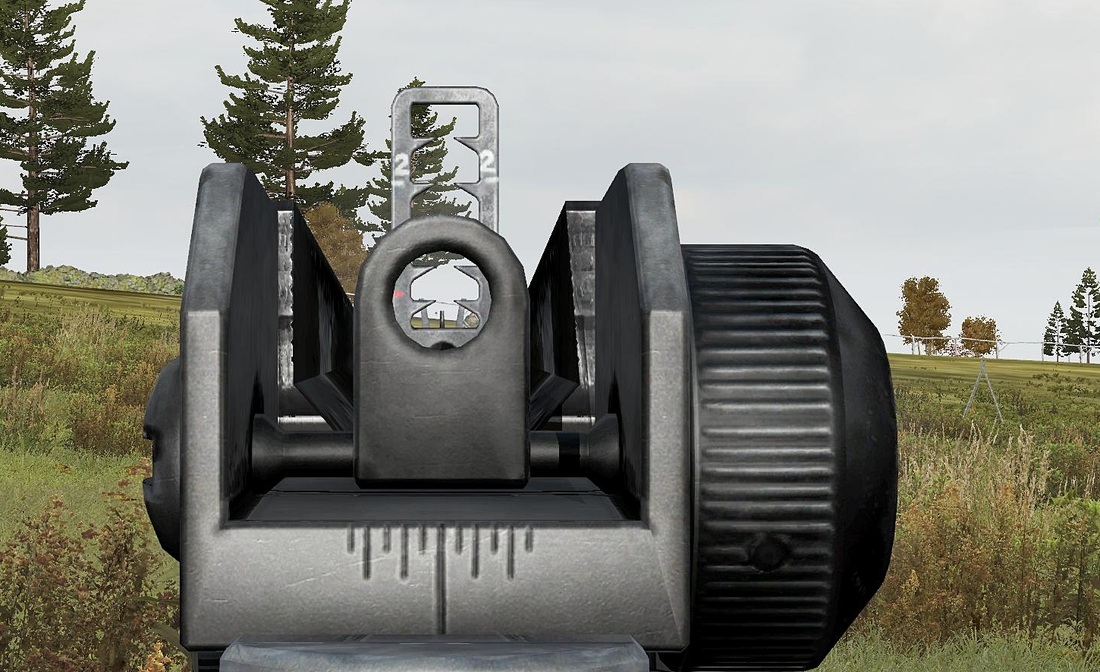 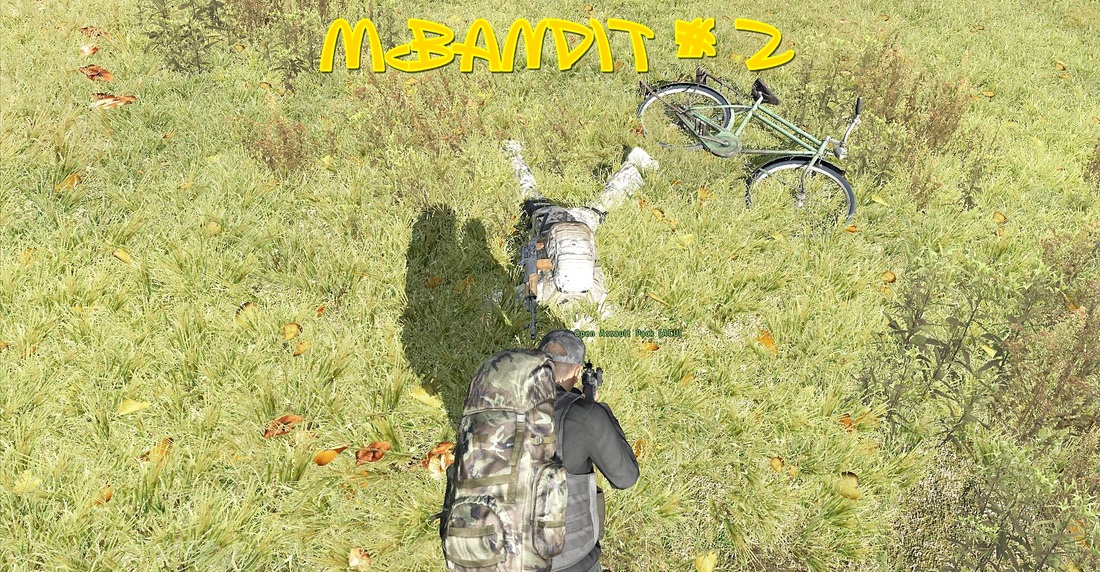 It is McBandit again, the joy ! I take the presents he has brought me , some mre's and cooked steak . I figure he will be back so i position myself and once again wait. 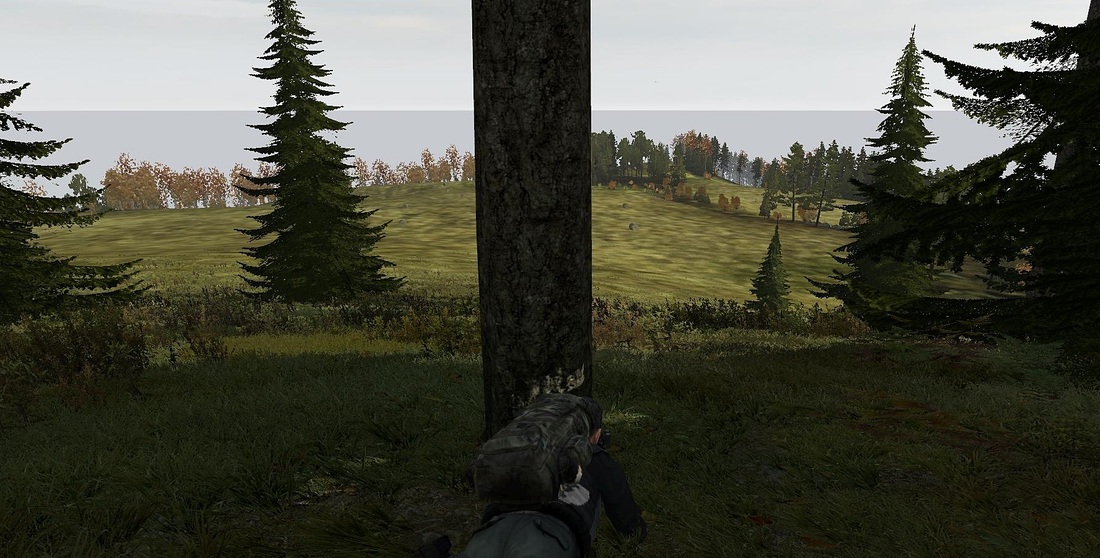 After going downstairs and hanging out my washing, grabbing an iced coffee and stuffing in a piece of pepperoni pizza with double cheese i return to this.. 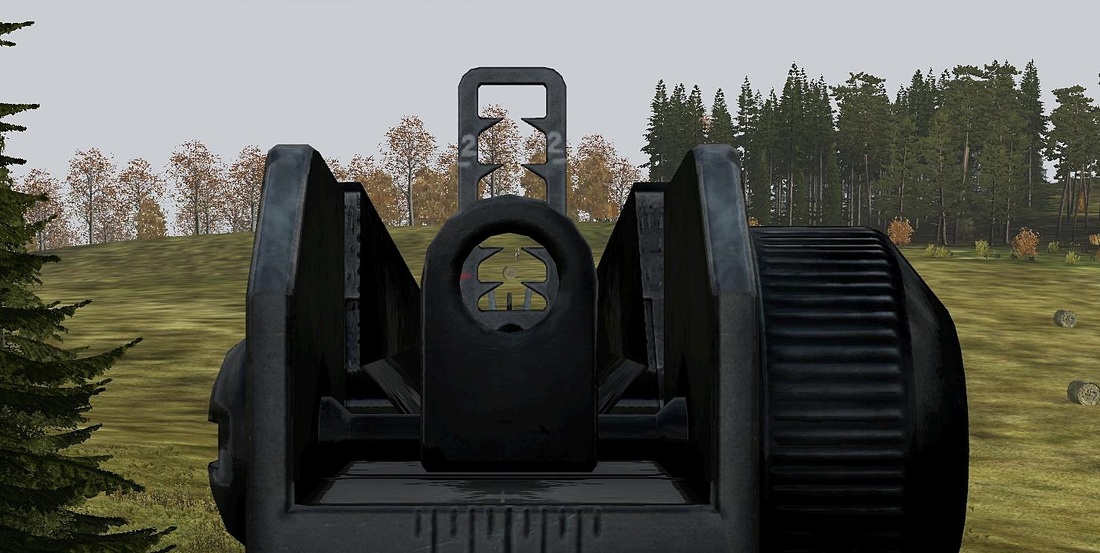 McBandit has found himself some new wheels, i must deprive him of them. 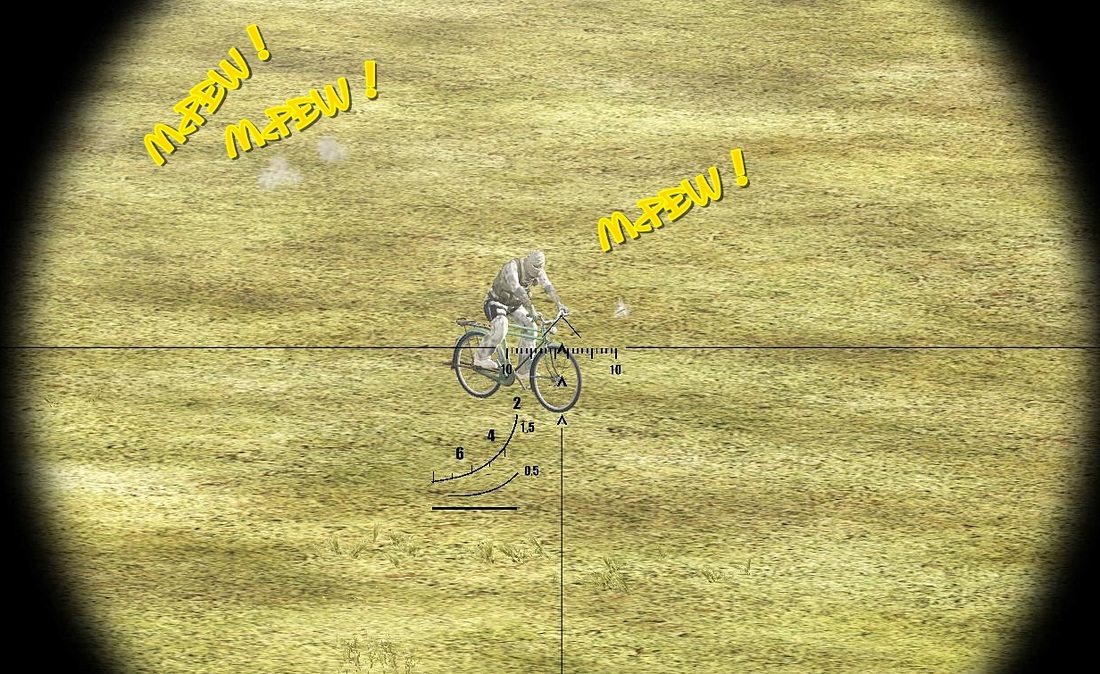 I manage a hit and he trundles off trying to escape through the forest, i flank him as he clearly does not know where i am and wait for him to get off and bandage.. 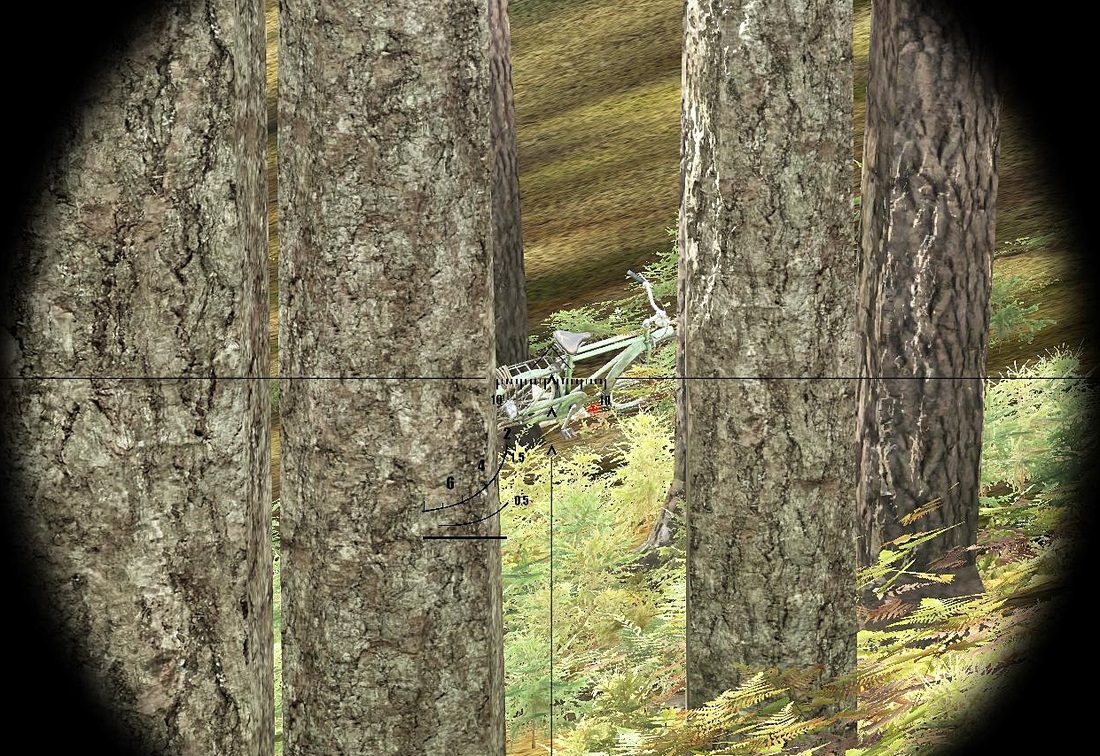 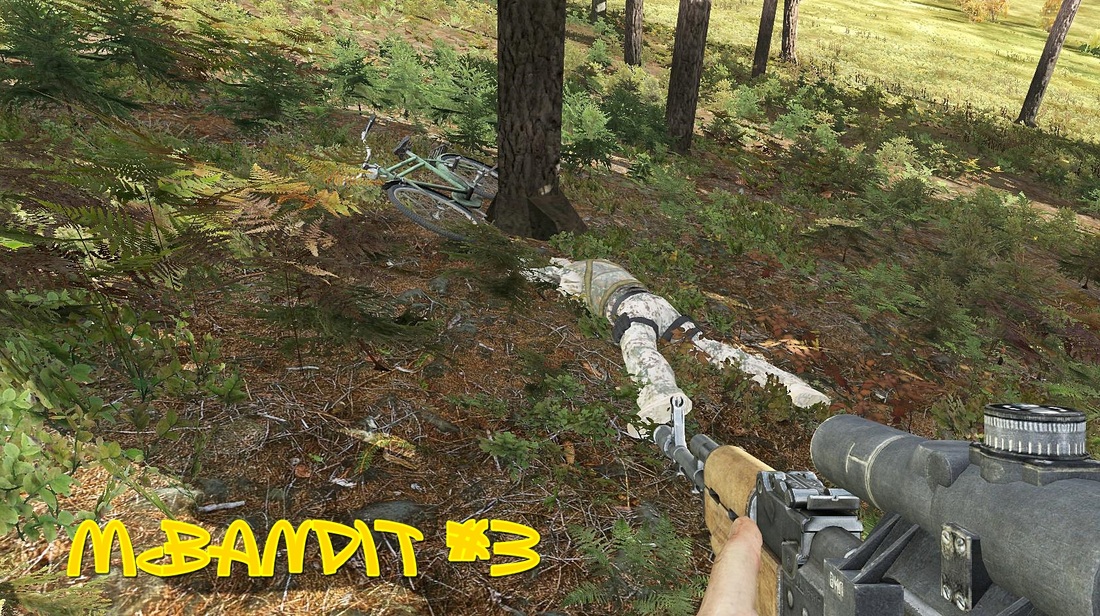 Presents this time are an entrenchment tool and a pepsi, McBandit is gearing me up quite well. So discovering it takes little to no skill to take out this mad leet bandit i head up North for some real action. Finding a heli wreck just minutes after a server restart i think..why not..and position myself.. 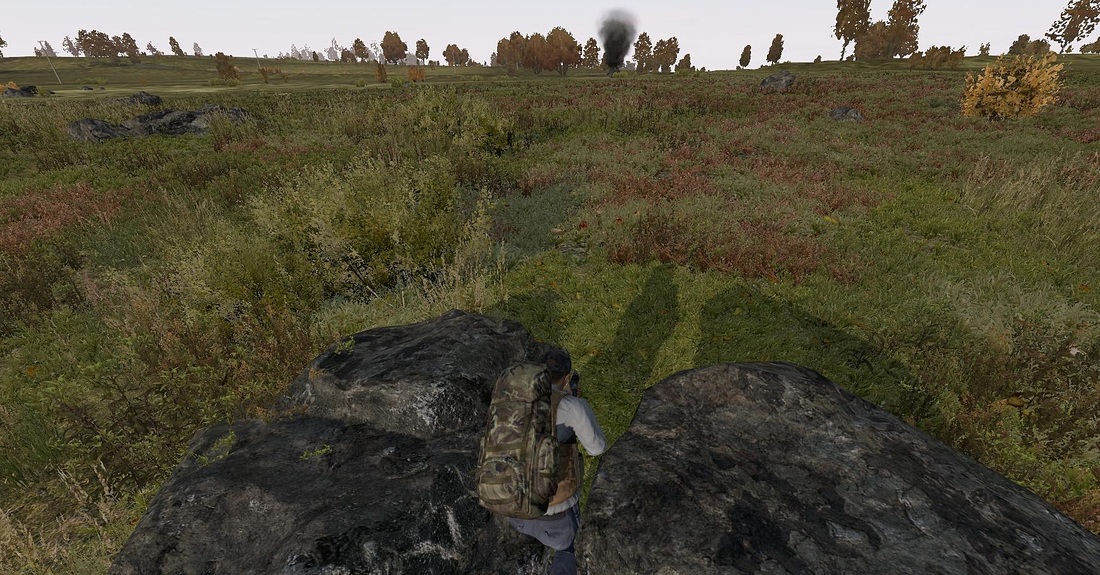 Sure enough within a short amount of time a bandit rolls in .. 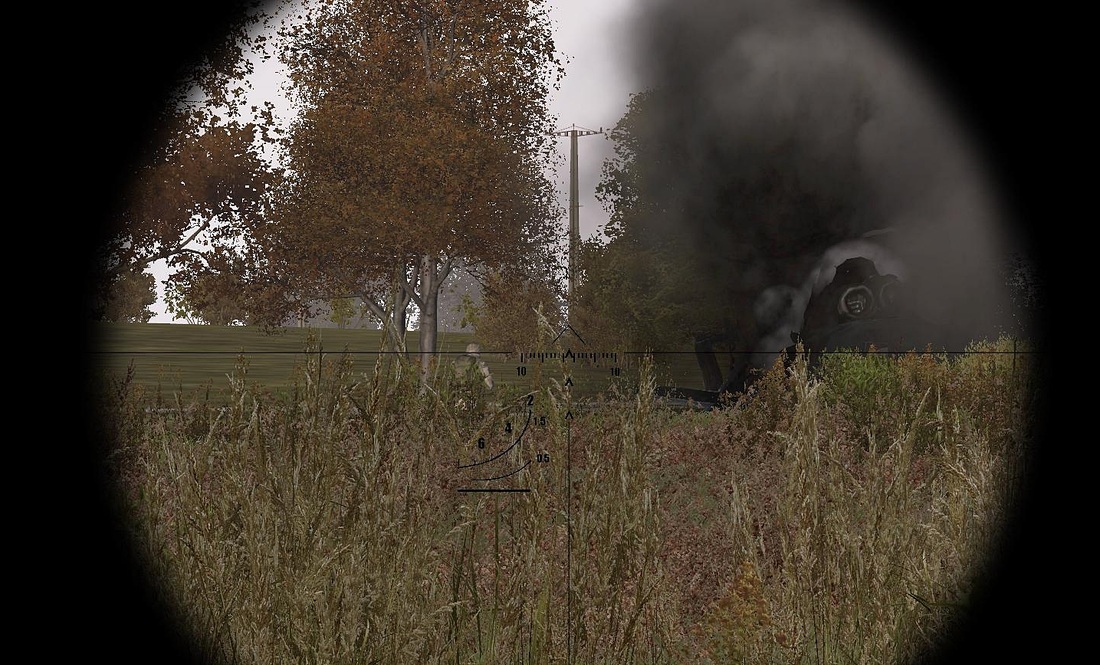 This guy is much more alert in his movements and i creep in slowly observing him, i have no real intention of shooting him. He moves pretty quick and darts around the wreck then legs it across a a road and over a small rise. I follow and breach the small rise,  see him in the distance running but then skipping sideways looking back, he knows i am there. As i watch i see him swapping out guns, not trusting my shit long range skills and not waiting to see what gun he has armed himself with i leg it down the rise heading for a bunch or trees and make myself as skinny as i can behind the biggest one. Thinking he may flank me as i would do in the same position , i hurriedly get up and book it looking back and keeping the heli and the rise between me and him, i make it to a hill and skirt around the back puffing heavily but safe.

McBandit gave me presents and joy. Northern bandit made me panicky just by being aware and me being not so confident with my gun. But camping the sidechat big mouth was amusing :)